Responsibilities of Spells and Poisons

I just got back from the grocery store where I overheard a woman, kneeling by her unruly child, say, "You know Luther's watching you, right?" I turned it over in mind a little while, but couldn't make "Santa" sound like "Luther." Do Lutherans use Martin Luther as a bogeyman?

Really tired again to-day, despite plenty of sleep. I miss coffee. Mostly the pain's gone from my abdomen, except for persistent nausea and intermittent shooting pains. I have health insurance now, and I'm hoping I can get an appointment to see a doctor within the next two weeks. I know not to hope for anything better. I do hope this is something that'll go away on its own.

I went to Tim's last night and played more Oblivion. This is my current character; 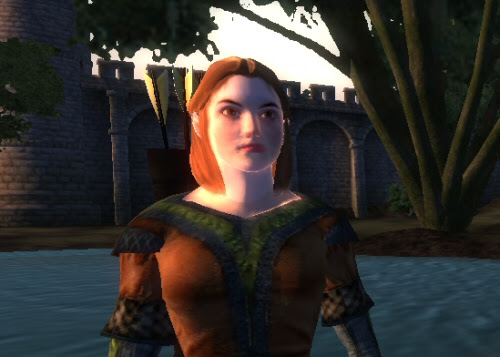 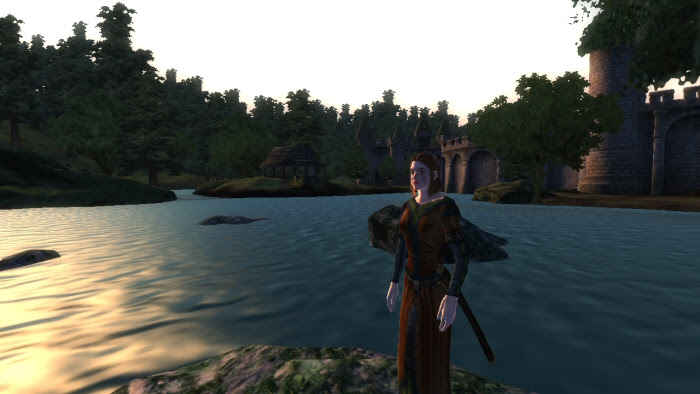 I love that Oblivion's character creation system has sliders for bruised eye sockets and flushed skin. I think this character actually looks like someone who spends most of her time gathering ingredients. I've been concentrating on Alchemy, but the main skills I chose for her custom class also include Illusion, Mysticism, Marksman, Light Armour, Sneak, and Destruction. I rather wished I'd chosen Blade instead of Light Armour, as in the hardest mode, most enemies can kill her in one hit regardless of what she's wearing, and as she has no skills that would cause her strength to get any higher (practicing certain skills raise attributes), she's only strong enough to carry around 150 pounds, so I have to drop the armour a lot of the time anyway. Marksman, Sneak, Illusion, and Alchemy, though, are a wonderful combination--enhancing your Sneak with an invisibility spell (for Illusion), and shooting poisoned arrows at people. Most enemies never get in range.

I also watched Francis Ford Coppola's Dracula again last night. That movie seems more perfect as years pass, as the problems I have with it either become gradually insignificant or I even develop affection for them. Well, okay, I have complaints--I haven't read the book in a while, but I feel like it gave a better sense of the lives of the English characters before Dracula came along. I'd have liked to have seen more of the "sensible Mina I always depended on" to contrast with the Mina losing her grip. I still would've liked someone else beside Keanu Reeves as Jonathan, but I've come to appreciate the appropriateness of Reeves' immature body and general aura of uselessness as a contrast to the more virile Count.

One of my favourite things about the movie is the peculiar effect, mainly created by editing, of simultaneous, multiple perceptions of the same event--things as simple as the wolf-ish form Count looking up from Lucy to see Mina, followed by another shot of the Count noticing Mina again--it comes off as though, in the first shot he inevitably notices Mina, and then, in the second, he deliberately notices Mina. There's a lot of confusion about whether actions or events occur because of someone's intention, supernatural power, or fate.

Some spinach lasts almost as long as bread.
Strange songs play in the car without sugar.
Lots of cinnamon turns apple juice red.
Tall trees hide many a feline mugger.
Posted by Setsuled at 8:38 PM
Email ThisBlogThis!Share to TwitterShare to FacebookShare to Pinterest