The Emperor Persecutes the Lindbergh Baby

I've been listening to so much Orson Welles that I hear his voice in my head reading everything I read. Sentences often begin with a faintly amused tone and end with a sudden loud, angry urgency.

To-day I've been listening to his around five hour production of Les Miserables, which is so far the version I've enjoyed most, the previous two having been the stage musical and the movie starring Liam Neeson and Geoffrey Rush. It's an interesting story, because almost every moment of it would superficially seem to cast Valjean's plight has ludicrously melodramatic and Inspector Javert as a dull, two dimensional villain. But I find Javert oddly sympathetic somehow and Valjean's story somehow really creates an impression of a world where it is really wrong to steal a loaf of bread to feed a starving family.

I still have three and a half pages to colour on the next Venia's Travels. I'm not in a huge hurry, though, as I suspect most readers have something they're doing to-night. I've never really been very excited by midnight on New Years. I remember one year Trisa and I were seeing a movie and let the minute pass unnoticed.

I'll probably still finish the chapter before I go to bed, but if anyone needs tiding over, here're some characters I designed for the new chapter who ended up only appearing in the background of a couple panels and have no lines. See if you can guess what movie stars I modelled them after; 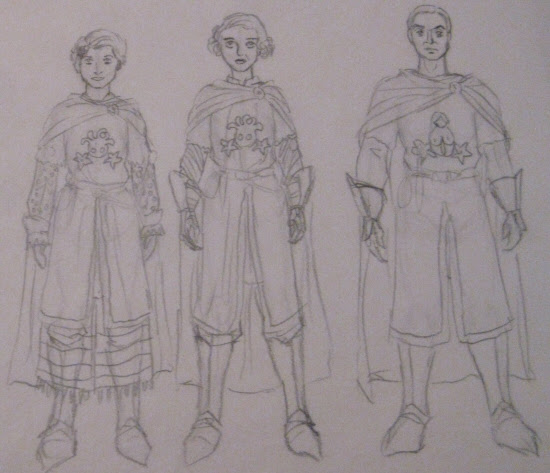