"Will You Wake from Your Dream with a Wolf at the Door, Reaching Out for Veronica?"

Iron candy canes in a cold tin can.
The impotent heater fringing the wall.
White box for dinner holds half a cold yam.
Holy fucking shit I need alcohol.

Still wary of alcohol, but I did have a cup of coffee with breakfast to-day. Fantastic. After almost a month of not having any coffee, it still made me feel really good. I have to wonder if there are things about coffee science doesn't know yet. It made me feel terrific, and it didn't make the pains in my abdomen feel any worse. I'm hoping the pain I'm still getting is some kind of after effect of the antibiotics.

Had to get up early to-day because of a lot of noise around the house. But on the plus side, I've already pencilled and inked a page to-day, and it's only 19 minutes past seven. With breakfast, I read "Exuvium", a new story from the latest Sirenia Digest. A story with a lot of nice imagery about a person seeking escape into a blissful, womb-like existence. The image of a butterfly cocoon on a clitoris was particularly effective.

This week I've been making my way through Elvis Costello's discography, chronologically starting with My Aim is True. I'm listening to Spike at the moment. I only skipped Goodbye, Cruel World, which Costello himself considers his worst album, though I did listen to the b-sides which feature very nice acoustic versions of songs Costello rightly feels were just about ruined by cheesy synthesiser and saxophone. As Costello says in the album notes, "Unfortunately, when I now hear the sax entrance on "The Only Flame", I can't help but think of the theme from Moonlighting. Ah well, it all seemed like a good idea at the time." But the alternate version of the song on the bonus disk, which is sans sax, is truly great.

I guess I got in the mood for this Costello marathon after catching his appearance on The Colbert Report last week, where Costello, having recently lost his voice, played guitar while Colbert sang "Cheap Reward" (which you can watch here). I rather liked that Colbert didn't give a "joke" performance, investing himself in a real interpretation of lyrics that came off pretty well. Colbert's best performances owe a lot to some subtly shaped delivery.

Here's an interesting moon I got a picture of last night; 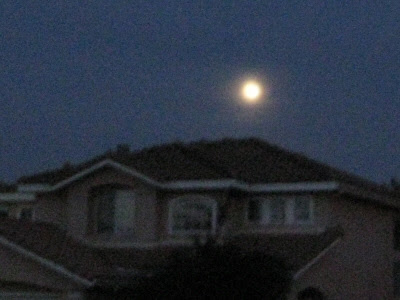 Posted by Setsuled at 8:01 PM
Email ThisBlogThis!Share to TwitterShare to FacebookShare to Pinterest