Rodents wonder what their brothers will find.
Small quick eyes peer back at the van of drunks.
Sake's better than beer and pot combined.
But the knowledge hides in the squirrels' tree trunks.
Blue people are very spiritual.
And I like shopping malls that never close.
Pink glow sticks hardwired my schedule.
It's never too late for men to wear hose.
All lizard men are immune to poison.
Other listed specimens never age.
Basil Rathbone dreams of sober treason.
Mariah Carey lives on a soundstage.
When people are sitting, they're not shopping.
The inkless pen's aroused near to popping.

If nothing else, the new, Ridley Scott directed Robin Hood looks like it'll have good costumes. I don't think there's any question it'll be better than the Kevin Costner movie.

On the bad end of the costume spectrum, I got a look at some of the especially ugly costume designs for Dragon Age: Origins at Tim's house last night; 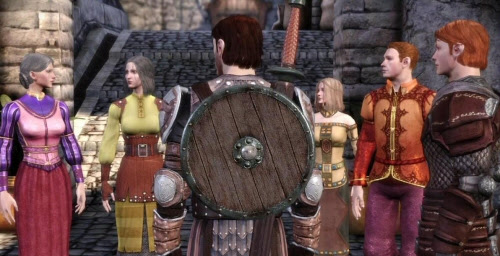 From the left, we have the classic pink undershirt over purple blouse followed by an old woman with breast emphasising leather girdle featuring extra support from suspenders and tiny shoulder pads which also emphasise the dislocated look of the oddly attached 3PO arms. After the man back with shield, there's a young woman who I happen to remember is a lady in waiting apparently wearing a tunic she bought at a modern Native American tourist shop, complete with oddly placed beadwork and a belt that must be painted or sewn on because it creates no visible indentation in the cloth. Then we have what appears to be a Renaissance version of the original costume for Watchmen's The Comedian.

None of these people are dressed like they're from the same country, there's little or no distinction for social class in the costumes, and everyone has massive hands, though I guess that's an anatomy thing.

I watched the 10th episode of Dollhouse with breakfast to-day, which was better than the ninth episode, but not at all close to the quality of episodes earlier in the season. The show seems now hellbent on abandoning all the ambiguity about the nature of the human mind and has settled on just calling the people brainwashed with real personalities underneath. I don't think Eliza Dushku's great at playing multiple characters, but I didn't anticipate All Echo, All the Time would be this dull. But the combined dream state of The Attic in this episode was kind of interesting, and Victor and Sierra are still really cute together, even if I wish their relationship had advanced very differently. I love how he looks sort of like a classic movie star and she sort of looks like an alien.

A nice surprise in the episode was an actor named Adam Godley, who I guess I've seen on Terminator: The Sarah Connor Chronicles, though I don't remember him. Here, he really impressed me with a performance that very naturally switches from pathetic to subtly threatening in an instant. If someone were casting a live action Gollum, this guy would be perfect. And he seems like a cross between Peter O'Toole and Malcolm McDowell.
Posted by Setsuled at 9:18 PM
Email ThisBlogThis!Share to TwitterShare to FacebookShare to Pinterest