Rearranging Deck Chairs on the Nautilus

Thinking about video game writing again to-day, getting a little angry. At Tim's last week, I overheard some more terrible dialogue from Dragon Age--apparently, the characters in your party will spontaneously have conversations amongst themselves. Good idea, except it almost always comes off phoney and stilted. Particularly one conversation I overheard between two female characters discussing clothes and I realised, these guys have no idea how to write women. I remembered something Seth McFarlane said on Howard Stern, that the reason for the main running gag around Meg Griffin, that she's a loser everyone inexplicably hates, is that he has a team of mostly male writers who have no idea how to write a teenage girl. A show like Family Guy has the luxury of going some bizarre gag route, but the people working on Dragon Age are trying to populate a world.

I realised this is yet another case of video game makers failing to properly allocate their personnel resources. Game makers gotta be rolling in dough right now--I mean, World of Warcraft with millions of subscribers paying fifteen dollars a month, and still the art looks only slightly above average for a fast food restaurant menu, the writing's filled with cheap Lord of the Rings knock-off structures with dialogue that sounds like a group of fourteen year-olds pretending to be knights. These people need to figure out how to spread the wealth, presuming they're more interested in making good games than they are in getting filthy rich.

Here's what I'd do--writers come relatively cheap, so, instead of getting some socially backward rich programmer to write this shit, get some decent writers by purveying modern literary magazines, collections, and paperback novels. Find out who you like, what everyone's strengths and weaknesses are. Or pay a director to find this stuff--someone with vision and talent related to human interaction. Then, instead of character customisation that really only alters 10% or so of dialogue in the game, put a different writer in charge of each major configuration--one writer in charge of male fighters with high charisma and low intelligence, one in charge of female thieves with high endurance and low wisdom, etcetera. Treat it like a television series, where different writers are constantly put in charge of the same characters in similar situations, with cohesion kept by regular meetings where the director outlines important thematic points. But each storyline, of course, would deal with its resident writer's own thematic ideas.

And hire real art directors and costume designers--no more sports bras and tunics with the stupid angular hourglass patterns. You got money, get talent for fuck's sake.

I forgot to mention how much I loved Sunday's episode of Natsu no Arashi. It's taking on a nice, fairy tale romance quality, with young Hajime taking for granted his romantic relationship with the ghost Arashi because they always have fun together. Arashi, meanwhile, knows she'll vanish at the end of the summer. When she explains to Hajime that his affection for her will eventually disappear when she's gone, "like all unreal things", it seems like Akiyuki Shinbo is again using anime to critique otaku culture as he does with Bakemonogatari and Sayonara Zetsubo Sensei--Hajime's barely just past puberty, physically and mentally, and Arashi is a perfectly beautiful, full grown young woman who likes a lot of the same things a young boy likes--looking for bugs, going on reckless adventures, and so on. One could say Shinbo's slightly imploring otakus to expand their worldview somewhat by using the exaggeratedly and charmingly simple minded Hajime as an example. But on the other hand, time's spent to show Arashi as a real person, who's afraid of falling in love because of the inevitable pain in parting. This I like--telling people not to put too much stock in pretty fantasies and, oh, by the way, the fantasies are real and vitally important. That's the perennial tug of war of the human spirit. 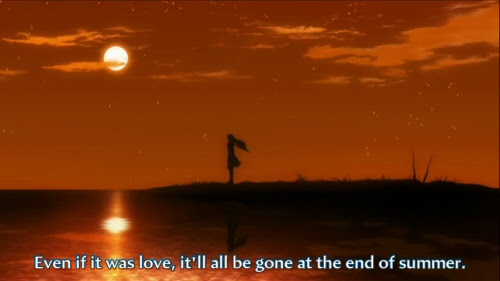 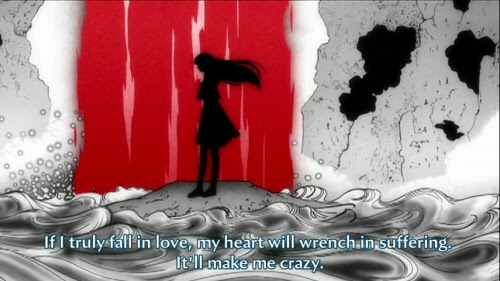 Ten hours now marked by pencil and ink.
Absence of coffee prevents extra thought.
Actions just happen as I do not think.
Is this the mind for which medicine fought?