I've just gotten back from city hall where I was part of a group interview for In-N-Out Burger. For those of you who are unfamiliar with the chain, it was the place Walter, Donnie, and the Dude went to eat after confronting the kid who'd stolen the Dude's car in The Big Lebowski. The place is somewhat legendary and for good reason--it's easily the best fast food in the west, and everyone knows it, which is why it's always packed. It also pays damned well--starting at ten dollars an hour. There were two managers with me in the group interview of five applicants--a woman who manages a warehouse and a guy who manages a fast food restaurant called Sonic. He revealed, after years working there, he's still only getting nine dollars an hour.

The other manager said she liked how In-N-Out Burger has scripture on their food and beverage containers. Which is true, and surely a bit creepy, yes--but fuck it, I need money. On the French fry holder is;

Proverbs 24:16—"For though a righteous man falls seven times, he rises again, but the wicked are brought down by calamity."

And so the sliced potatoes of Hell shall rain upon the catsup packets of the wicked.

The interviews were conducted at city hall because Santee's location hasn't opened yet. Santee's city hall is near the neighbourhood I grew up in and when I was a kid the place was a little corner store before it was city hall. I used to go up there sometimes with other kids from the neighbourhood. I remember the year the movie Jurassic Park came out the guy who ran the store tried to convince us that the dinosaurs in the movie were real, that the filmmakers had cloned them for the movie and were keeping them on an island. Which brings me back to when cgi was new and seemed so revolutionary--I think a couple of the kids actually bought the story. I remember how wonderful it was thinking that these dinosaurs on screen just looked absolutely real. The funny thing is, they're still a lot more convincing than most cgi nowadays, I think because people cut a lot more corners. 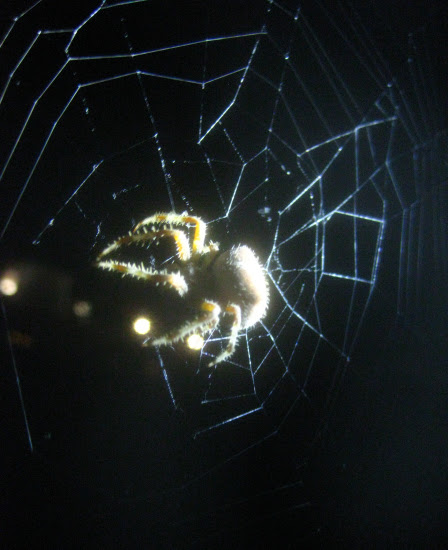 The garden spider in the front yard has been sticking around rather late in the year for his kind. The lesson here; feed honey bees to your spider.

Posted by Setsuled at 3:16 PM
Email ThisBlogThis!Share to TwitterShare to FacebookShare to Pinterest