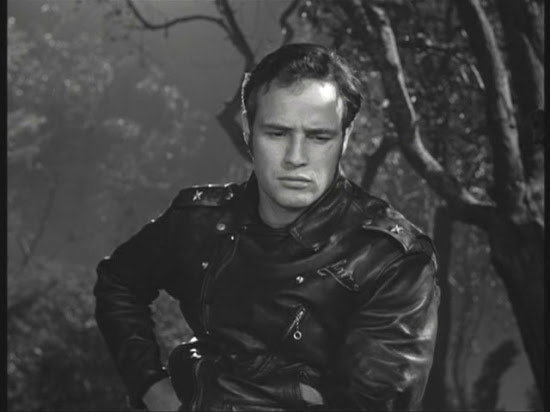 There's a movie in Marlon Brando's performance far greater than The Wild One. Directed by Laszlo Benedek, the movie's far more characteristic of the work of its producer, Stanley Kramer, a director obsessed with moralising about social issues he wasn't very articulate about as a filmmaker and whose movies only ever worked due to weirdness unrelated to the message. In this case, a fairly corny, out of touch portrayal of hoodlum culture in post-World War II United States and its conflict with more traditionally minded citizenry is vastly elevated by Brando's alienated aura. It's no surprise Jack Kerouac admired him--he may have been playing a hoodlum, but he's more distinctly beat.

He plays Johnny, leader of the Black Rebels Motorcycle club who come riding into a small town one day. Most of the club are portrayed by middle aged actors doing broad and calculated comedy affects, resembling more guys who went to The Three Stooges school than volatile youths. This comes out most in a cringe worthy scene where a couple of them deliver some improvised scat to the consternation of an elderly bartender.

But okay, it's enough to set up at least the concept of a culture clash, so we can follow the movie's logic as it takes us to the conflict where the conservative adults start to get ruthless in an effort to just get these troublemakers out of town. We end up with a simplistic argument that these self-confident adults can be even more vicious than these mixed up kids. This may be true, but it's hardly interesting when both sides lack real character development. 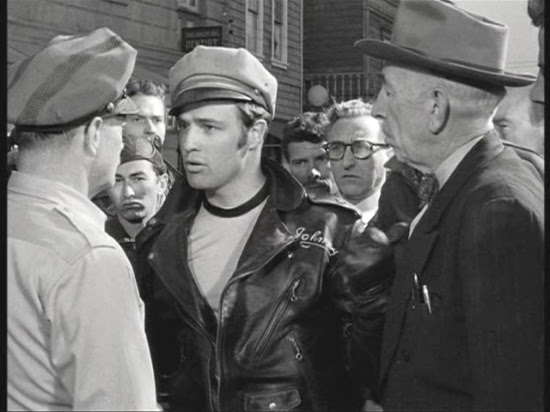 Johnny's supposed to be this character who went down a path of restless chaos in life because there's no sensible authority for him to have faith in. Brando's performance is so good, he ends up coming off as a character tormented because he can't find a place in the movie. In a world where everyone else is giving superficial, affected performances, his reactions ripple with emotional depth. He's like a man walking through a dream.

He reminds me of Tom Baker. He accepts the reality of what's happening, and yet seems disengaged from it at the same time. It's as though he takes as much as the limited world of fiction can give, and with a sort of melancholy affection delivers much more. So when, at the end, Kathie, who's set up to be the final voice of moral authority, proclaims that Johnny isn't thanking them because, "he doesn't know how," instead of getting this revelation about how the world doesn't understand Johnny, we get a fascinating moment when, in Brando's subdued reaction, we realise the movie doesn't understand Johnny. His manner suggests a fundamental strangeness about existence that goes beyond saying simply that the orthodoxy doesn't know as much as it thinks it does. There's the quiet embodiment of the cool indifference of the universe. 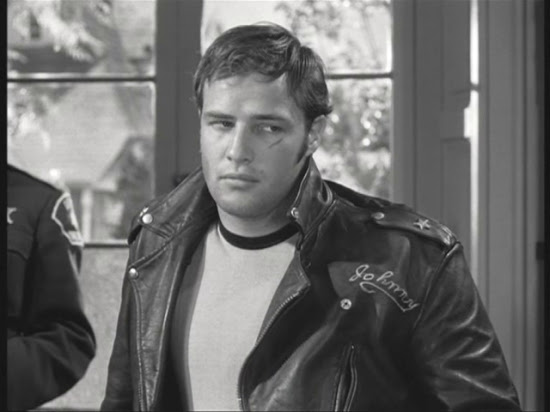