The Darkness and the Tree 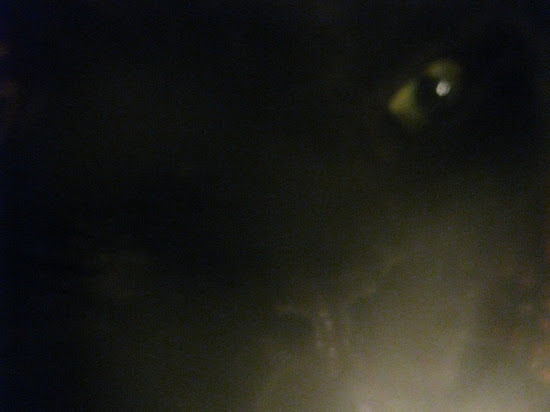 The cat who was the darkness.

It's my sister's cat, Saffy, resting with her nose on a Christmas light, actually. 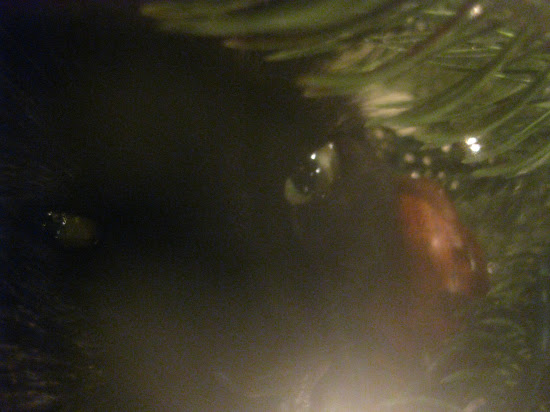 I spent about four hours last night finishing the extraordinary amount of reading assigned for class this week--and I'd read some of it for two hours each night beginning on Friday. I am a very slow reader, it's true. Though I suspect the issue is more that most people read too fast.

Assigned were Olaudah Equiano, Phillis Wheatley, Frederick Douglass, Margaret Fuller writing about Frederick Douglass, Sojourner Truth, and Louisa May Alcott's short story "My Contraband". The theme here is pretty obvious. I think of all of them, Douglass impressed me the most. I honestly think the guy was an ubermensch. Who but someone who's risen above both master and slave mentality could humanise his oppressors so, as he's able to discuss how the institution perverted the heart of what he believed would otherwise have been a kind woman in one of his owners? I was also very impressed by a bit where he advanced his education by challenging white kids on the street, saying he could read just as well as them, then receiving lessons in the form of their gloatingly proving him wrong. As a slave, he describes the situation as being an intense, continual sting to his pride, yet he was able to strategically set that aside to manipulate the kids for his ultimate benefit.

Anyway, despite all the material we're supposed to cover this week, we spent the whole class period to-day discussing Olaudah Equiano, whose autobiography I'd already read for British Literature I--his text appears in both the Norton Anthology of British Literature and the Norton Anthology of American Literature. I feel he belongs more in the former simply for the style of his writing, which seems to reflect the greater sensuality of English literature at the time as compared to American. The discussion in class to-day focused on it as a work of propaganda, as apparently many of the facts are fabricated, most notably his place of birth, in order to create an emotional appeal in the interest of abolitionism. And indeed, of the pieces assigned for this week, Equiano's is the worst written, with broad emotional ploys, little characterisation or complexity, stuff which gave Douglass' work a much greater impact. I can't for the life of me understand why we needed to spend a whole class period on Equiano--the teacher seemed a little peeved even when I tried to steer the conversation at one point to Douglass.

We finally got to talking about James Frey, the excerpt from whose book had been assigned early in the semester. The idea was to talk about the value of emotional truth versus literal truth. The conversation was somewhat awkward for me as I think Equiano was only partially successful and James Frey thoroughly failed with respect to this emotional truth. It occurred to me the outrage about James Frey was misdirected self-loathing. Oprah, and the members of her book club, forced themselves to respond emotionally to something their humanity must have at some level recognised as an incredibly inept piece of writing because they had faith in the supremacy of the "truth". When they found out they were supposed to judge Frey's work entirely on its quality after all, they were outraged by the energy they'd lost to their own shallowness, probably without understanding it.