I'm never going to understand the appeal of Agent Coulson. I don't know why articles like this take it as understood that he's the best thing to come out of the Avengers movie. All I can think is that Disney's greased a lot of media palms in order to promote the S.H.I.E.L.D. television series. He still seems like a guy from a cell phone commercial to me.

Replying to my post yesterday, Felis pointed out to me that there are other, better options than Animal Control for the ducks. So I googled and found the page for the San Diego humane society and got up early to-day to check to see if the ducks were still there before I called. When I got down to the river, the ducks were still there and there was a woman tossing them breadcrumbs. I told her about my concerns and she said she'd been raising ducks and geese all her life and had thought of taking the pair home but didn't have room for them. She told me the white ducks had been among the other ducks for about a week--it'd been a while since I'd had time to go down to the river to feed the ducks. She pointed out the white ducks were very young, that they had some fluffy down still, which is true. 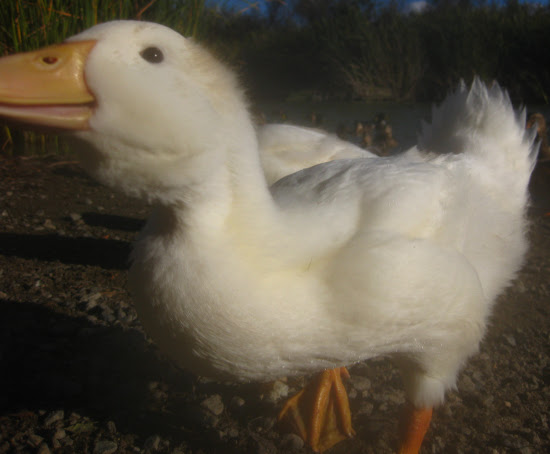 They're much bigger than the other ducks, but I guess that could be due to the breed. The woman assured me their clipped wings will grow back and that they were adjusting well.

So I walked away feeling a bit conflicted. I mean, is it weird there was a woman there who was ready to allay all my fears and suspicions? I started to wonder if she was the one who'd released the ducks and was throwing me off track. Maybe I watch too much television.

I finished the third season of The Sopranos last night. It really is a mystery sometimes what makes a TV show good. There's a lot about that show that's inconsistent or just poorly thought out. The penultimate episode of the third season ended with one of Tony's henchmen pulling a gun on his suicidal bipolar girlfriend to tell her to stay away from Tony and his family. This was after it had been established that the whole reason she started going out with Tony and then antagonising him was that she had a death wish. Then we get the business about how her negativity and how she was impossible to please was what attracted Tony to her because it reminded him of his mother. Except she didn't exhibit any of this when he first met her--he seemed into her because she was hot and that was pretty much all. All we know about her in her first couple episodes is that she's attractive and works at a Mercedes dealership. And it's a bit of a leap to say this is a pattern for Tony when his other girlfriend and his wife don't exhibit these qualities.

Carmella, Tony's wife, is possibly the most hazily written character among a group of hazily written characters. Lois Griffin has a more solid foundation. We go from the first season where she says she doesn't "mind the gumars"--Tony's mistresses--because they answer needs he has that she can't to where she's intensely jealous of every phone call from a woman she doesn't know.

We have the rape plot with Tony's psychiatrist that never goes anywhere. We have great inconsistency in how open Tony is about his activities as a mobster with his psychiatrist. Why couldn't he have told her that Ralphie, without mentioning his name, was responsible for the "work related death" he'd been mentioned in an earlier session and that's why he was upset with him?

And yet the show is compulsively watchable. Mostly when it's being pulpy and doesn't pretend to be more than it is. The episode where Paulie Walnuts and Chris are lost in the woods trying to track a Russian commando they were supposed to kill was great. These mob guys who act like they're the shit all the time suddenly faced with a real life or death situation they might not be able to handle--there's a lot of great tension and fundamental comedy to it.