After successfully keeping it out of my mind most of the day, even hours after voting, I'm suddenly obsessively watching the election numbers. Huffington Post's main site has a diabolical handy regularly updating flash election monitoring chart. Obama had 3 electoral votes to Romney's 49 when I got up to use the bathroom and when I came back Obama had 61. My superstitious nature may compel me to get up to pee whenever it looks like Romney's ahead now.

At least Huffington Post put little smiling pictures of Obama and Romney next to their numbers. 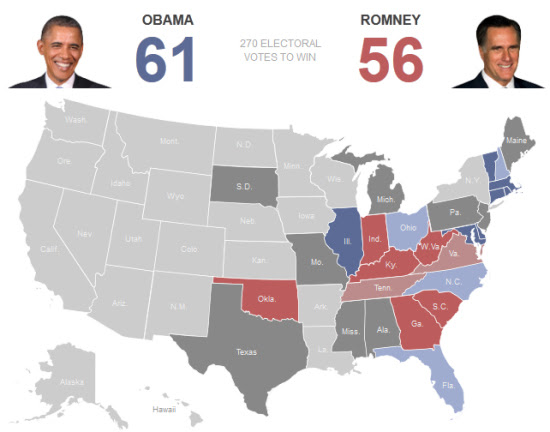 It's easy to imagine it as a primitive Final Fantasy game, especially as the intermittent updates make it feel turn based.

It'll be hours yet before there's enough information to call it, but it's hard to ignore for even a minute when the stakes are what they are. The choice is between the less effectual than one would like incumbent and a scary mayonnaise monster who seems like he'd sell people to China in condensed cubes while exhibiting the hollow semblance of glee.

I wish Florida would stop jiggling.

Andrew Sullivan is talking about how exit polls are showing women prefer Obama. I hope that bears out, if only for how annoyed I got when I heard people talking about women being "turned off" by Obama coming on heavier in the final debate, that the sensitive pink demographic were fainting into Romney's gentler binder. Good grief.

Gagh! Florida jiggle again! Oh, great, are you going to be problem again?