Where has the Credible Weirdness Gone?

If you've noticed a decrease in delightful weirdness at The Onion lately, I think it's probably because a lot of the writing staff has moved over to Thing X. Take a trip to the thing. So far I've most liked the "X How" segments.

That would have nice on Halloween. I missed it. 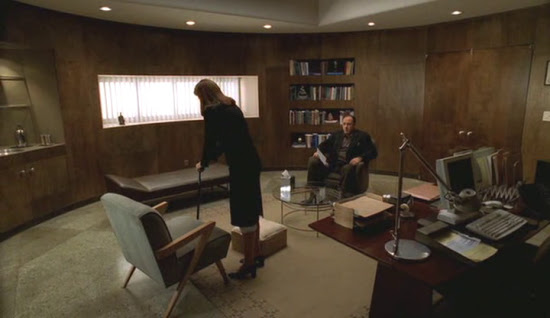 I got to the fourth episode of The Sopranos' third season last night, "Employee of the Month", in which Lorraine Bracco's character Dr. Melfi--Tony Soprano's psychiatrist--is raped in a parking garage by an unknown assailant. She identifies him--it turns out he works at a nearby fast food restaurant. He hadn't appeared on the show before and I don't know if he appears after the episode.

Rape is a tricky thing to portray. Like any form of violence, it takes skill to portray it in a way the audience will accept the reality of it. Most people don't want to imagine something unpleasant just for the sake of imagining something unpleasant so, among other things, the story around it has to engage the audience in a useful discussion. A good illustration of what to do and what not to do is Watchmen. The Alan Moore and Dave Gibbons version isn't sexy, it's oddly mundane and uglier for it, the reactions of the people involved are complicated and a little weird in the way human beings are weird. That's the way to do it.

In the Zack Snyder version, the film, the director abandons, as he often does, any notion of character POV, shooting the victim like he's directing a music video, the general composition of the scene being in line with the movie's more artificial action film quality as compared to the grittier comic. He does what so many filmmakers end up doing with rape scenes--they make it sexy. This isn't how you do it, not if you want us to consider the story from the point of view that something really ugly and terrible has happened.

The episode of The Sopranos took a safe route, basically just showing the assault happening with an understated compositional style with no music, leaning on the actors to convey the whole thing. It's brief, and most of the episode focuses on the aftermath, dealing with notions of justice when the cops are forced to release the perpetrator after a mishandling of evidence and Melfi begins to consider turning to her mobster friend in order to get revenge.

And I thought, "Okay, that'll be kind of nice, seeing Tony Soprano beating the shit out of this guy."

But this didn't happen. Melfi, at the end of the episode, is just about to mention it to Soprano, but decides not to, and the episode ends, leaving me with the suspicion that the people behind the show thought they'd made something more profound than they'd actually made. Sure enough, here's this quote from director David Chase on the Wikipedia entry;

"If you're raised on a steady diet of Hollywood movies and network television, you start to think, 'Obviously there's going to be some moral accounting here'. That's not the way the world works. It all comes down to why you're watching. If all you want is to see big Tony Soprano take that guy's head and bang it against the wall like a cantaloupe… The point is—Melfi, despite pain and suffering, made her moral, ethical choice and we should applaud her for it. That's the story."

That might be fine if the counterargument had been introduced at all. The closest we get is when Melfi's psychiatrist, played by Peter Bogdanovich, starts a sentence with the word, "Civilisation--" before he's cut off by Melfi mockingly saying, "I'm not going to break the social compact," and she goes on to talk about how satisfying and empowering it makes her feel just knowing she could sic Tony Soprano on her attacker.

And even without going further than the word "civilisation," we can sense how feeble any counterargument would be. Of course, you can say the episode has set up a strawman. We don't learn anything about the rapist beyond the fact that he raped her and that he's employee of the month at the fast food restaurant. We never learn the details of how evidence was mishandled so that he's set free. But if that's so, it's a strawman for an argument that's never executed. It's like if Captain Hook won at the end of Peter Pan. It's cheap emotional manipulation with no end but smug satisfaction on the part of the writer.

The Sopranos isn't some kind of realistic study of violence and how it effects people. We have one hastily introduced business owner after another just so we can join in the fun of the mobsters beating the shit out of him. The characters are complex and interesting, but only within the context of this fantasy world.

But even if the rapist weren't a strawman--let's say he's established as a three dimensional human being. We could then go to the question that's introduced at the very beginning of the first Godfather movie, when a man asks Don Corleone for justice for his assaulted daughter because he can't expect justice from the police. The question of whether or not it's proper to take the law into one's hands is always a subject ripe for exploration. I mean, I've known several women who have been raped or otherwise sexually assaulted, and in each case, the rapist wasn't brought to justice. Honestly, if it were in my power to take revenge on one of these guys, I would.

I'm with Melfi when she feels the urge to use Soprano as an instrument of revenge. Then Chase dismisses as shallow the very feeling he hoped to provoke in writing her.