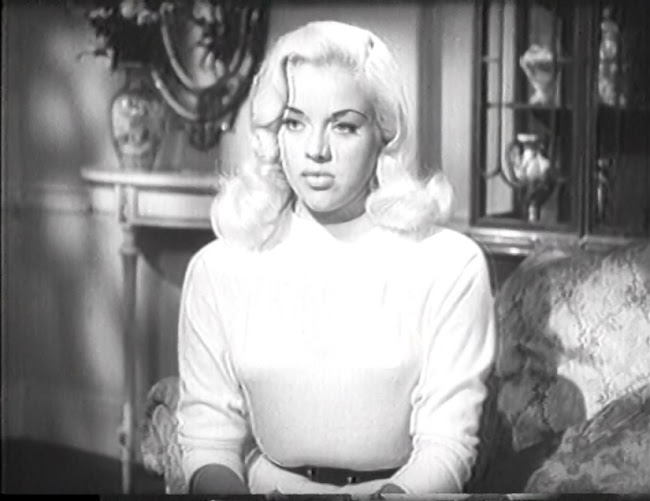 Imagine some of the most talented people working in the movie business got together and decided to adapt a dopey Lifetime movie script into a feature film. There you might have something like the anomaly called Passport to Shame (a.k.a. Room 43), a 1958 low budget British crime film. The title and subject matter, prostitution, recall Kenji Mizoguchi's final film from two years earlier, Street of Shame. But while that was an informed and thoughtful examination of prostitution, Passport to Shame hits every melodramatic and heavy handed moralistic beat in the book, enigmatically doing so with good performances and decent direction by Alvin Rakoff. 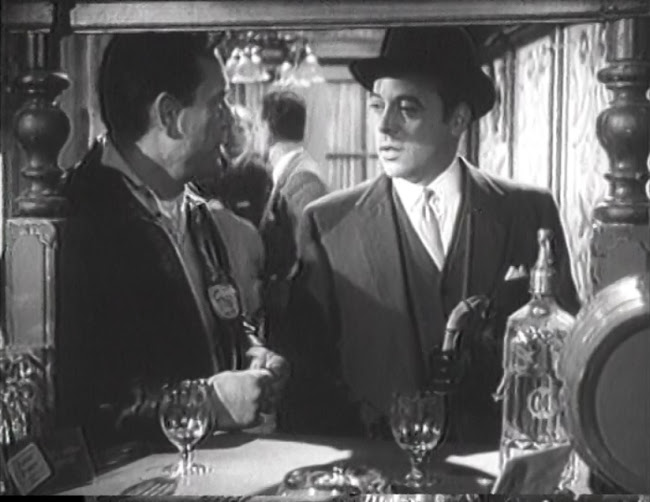 The villain is Nick Biaggi, a pimp with pretensions to high class played like someone with real breeding by Herbert Lom who had appeared as Napoleon Bonaparte with Henry Fonda and Audrey Hepburn in King Vidor's adaptation of War and Peace two years earlier. Here's his scheme, as near as I can figure;

Buy a cab, under the pretence of a bank loan (Nick owns the bank), for an American G.I. named Johnny (Eddie Constantine) who wants to start a Taxi driving business. Arrange for a truck to wreck the cab while it's parked on the curb in a hit and run, absorb Johnny's debt and use it as leverage to get him to marry a French waitress Nick wants to turn into a call girl. The girl, Malou (Odile Versois), he has his brothel madam, Aggie (Brenda De Banzie), frame for robbing the cash register so they have leverage with her too. They need to get her a quickie marriage so that she can't be extradited to France once she's become a prostitute--though presumably she can still be arrested for it. The fact that Johnny's American and the movie takes place in London doesn't seem to be relevant somehow.

So this complicated and expensive web of coercion is to recruit one prostitute while, as we see later, Nick has a whole building full of prostitutes already. And one of them is Diana Dors. 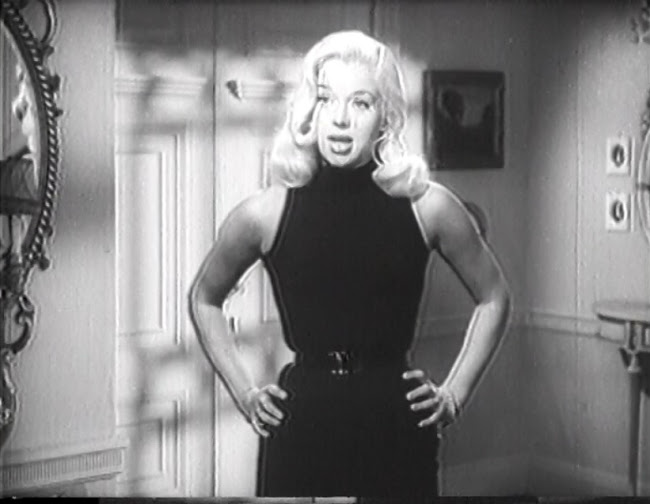 Dors comes on with a nice hard bitten edge to her when she meets Malou who still thinks Aggie is her gracious benefactor, giving her a nice place to stay and new clothes after she's forced to flee France. Dors' character, Vicki, says Malou reminds her of her sister whom we learn is the whole reason Vicki works as a prostitute--Nick burned Vicki's sister's face with acid and now Vicki needs the money to pay for an operation. 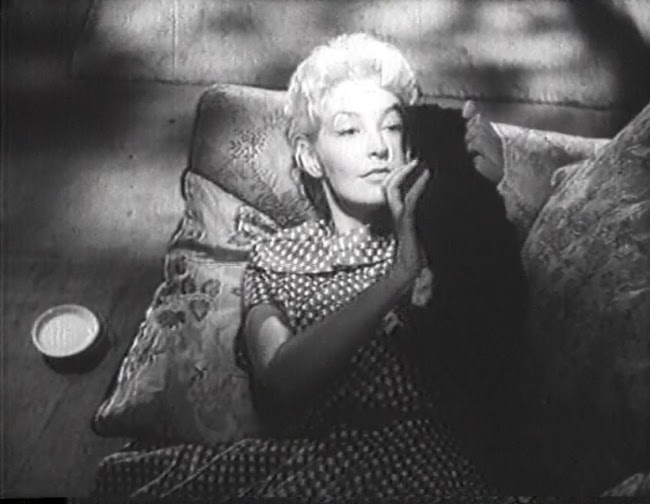 The movie's moral perspective is clear--the only prostitutes we're allowed to sympathise with are the ones who've become prostitutes for really weird and complicated reasons. 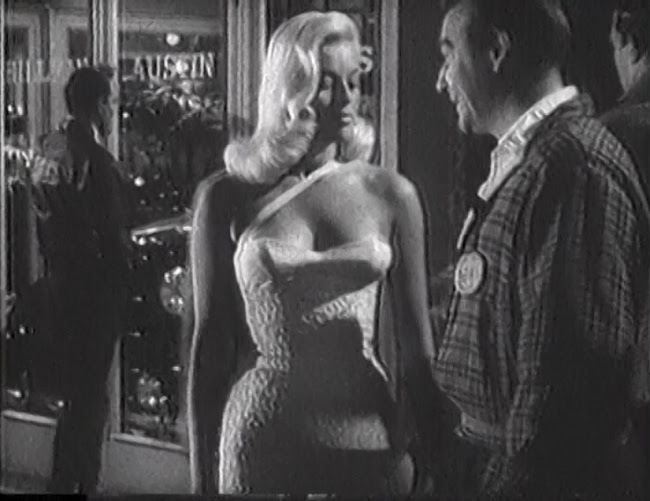 There are also a lot of surprising names in brief or minor roles. Jackie Collins plays a girl on the street and a twenty five year old Michael Caine makes an uncredited appearance as a man getting a quickie marriage. According to Wikipedia, the camera operator was future director Nicolas Roeg. 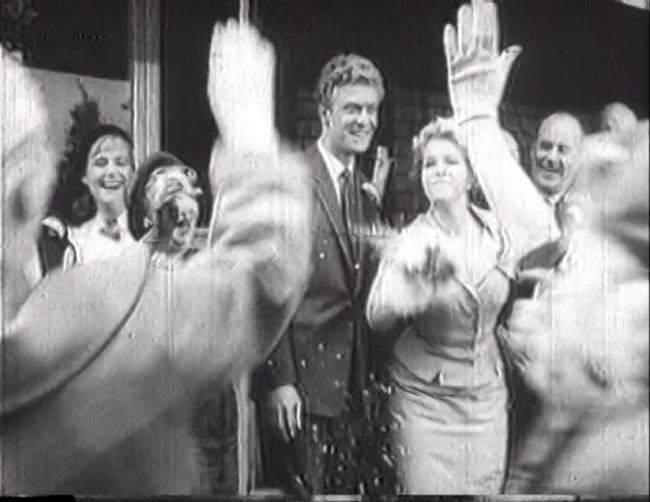 The most ambitious scene of the film is probably a dream sequence where Malou imagines falling into a life of prostitution. It looks quite a bit like the stagy interlude sequences common to Hollywood musicals of the time or like the ballet sequence from The Red Shoes that inspired them. 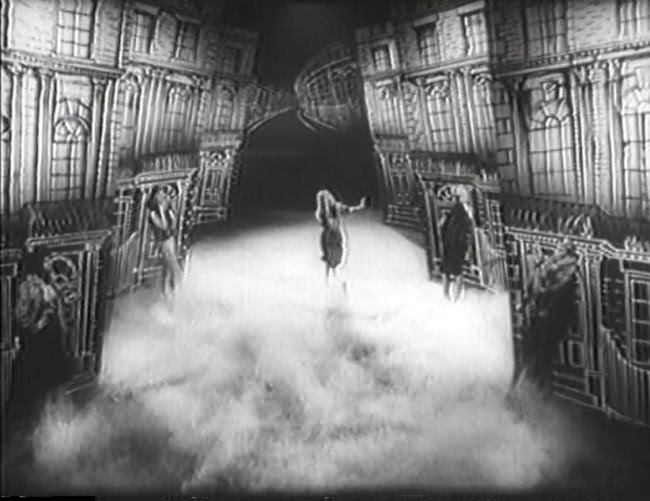 Malou runs down a street of stylised building façades like the Singin' in the Rain interlude sequence before falling into a pit of men with grasping hands like something right out of The Red Shoes. Versois had trained as a ballerina and her movements in this scene seem to be subtly balletic, a bit like Josette Day in Bele et la Bete. 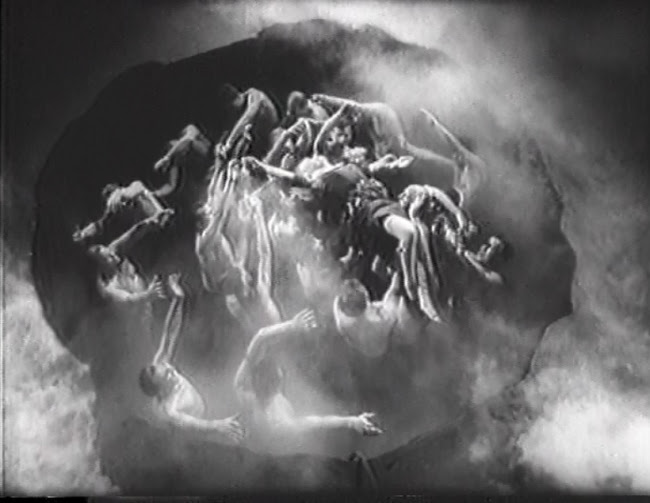