I dreamt last night I still worked at Pick N Save, a discount retail store I worked at fourteen years ago (it's been renamed Big Lots). Except the store was contained within an endless grid, in all directions--north, south, east, west, up, down--of cheap, run down apartments. And only one sector had a bathroom and whenever anyone needed to go he or she had to go this specific cluster of rooms with really small corridors. For some reason it was always crowded with angry obese people.

Posting rather late to-day--I got home before five o'clock but it occurred to me I wanted to post a specific screenshot from an episode of Twin Peaks and I remembered the Blu-Ray writer I'd gotten for my computer months ago and hadn't gotten around to actually hooking in. So I figured I'd roll up my sleeves and take a screenshot from my legally purchased Blu-Ray instead of going the faster route of simply downloading the video from a torrent site.

Little did I know the tangled labyrinth I'd set foot in.

The hardware was the easy part. The screws were too big for the holes but I had some smaller spare screws in a nearby drawer. No, the hard part is apparently the movie industry doesn't want you playing Blu-Rays on computers. I tried it in Media Player, Media Player Classic, VLC, even iTunes. No dice. I googled and found there's supposedly a way to get VLC to play Blu-Rays--I installed a cfg and a dll file into specific folders following identical instructions on various forums and sites. These instructions all had at least twenty comments saying this doesn't, in the end, actually work--which I can confirm. It doesn't work. Because all Blu-Rays are encrypted.

Now, you can get a trial version of something called Aurora Blu-Ray Media which puts a big watermark in the middle of the video and doesn't use the Blu-Ray's native menu. The full version costs thirty dollars.

Finally I just googled, "How to play Blu-Ray on PC." Google had these instructions in a box above the search results:

To do this:
Install MakeMKV as described in our original Blu-ray how-to.
Insert your Blu-ray disc. ...
Fire up MakeMKV and head to File > Open Disc and choose your Blu-ray drive. ...
When it's done, just double click on the resulting file and it will play in VLC.

Which I'm in the process of doing right now--that is, ripping the entire disk to an mkv file, which is a video file. I'm also downloading it at the same time just out of curiosity, just to see which goes faster.

So why the hell is this so difficult? Are they trying to prevent people from ripping movies? Most people seem to watch movies through streaming services now which of course can be ripped from--I've never done it but my impression is that it's a lot easier than ripping from a disk. Mainly this seems to be a plan to marginalise Blu-Ray and DVD as a format--I'm working with Windows 7, I hear it's even worse on Windows 8 which doesn't even support DVD playback.

Hmm. Looks like MakeMKV is going to take a total of thirty two minutes to rip the Blu-Ray--it's currently showing seven minutes remaining--while the torrent I'm downloading is going to take another hour and a half--that's downloading at around 400kb/s, I'm not sure how big the file is since I just selected the episode I wanted to get a screenshot from from a 76 gigabyte torrent. Though if it were a more popular file, like the latest episode of Doctor Who, for instance, the torrent would unquestionably be the faster route.

And I have to think that just maybe the industry would see less threat from piracy if watching movies legally were at least half as easy as it is illegally . . . Ah, my mkv is ready. At long last, the screenshot: 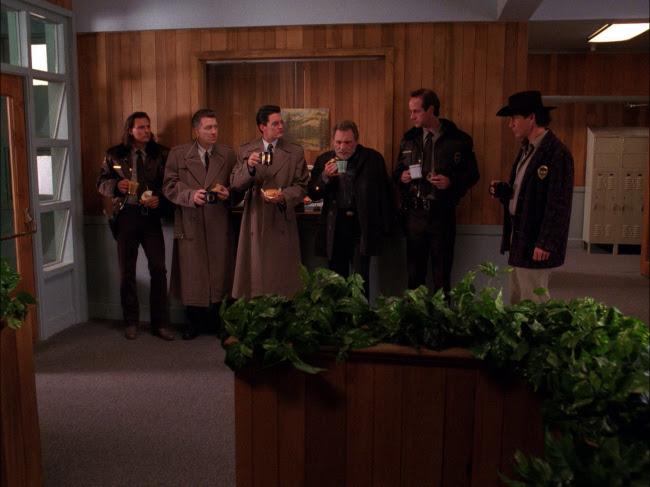 You can tell episode eleven is directed by David Lynch because of shots like this, a long take of a group of people that seems like it was meant for a big screen--or Blu-Ray--where you can see all the tiny details of people's faces. Episodes not directed by Lynch tend to use a lot more close-ups and have a very TV feel.

That's the last Lynch directed episode before the long season two drought. I usually skip right to the final episode from here but having the Blu-Ray makes me feel vaguely obligated to watch the in between episodes. They have their moments, I guess. Though I don't know if I can put up with the torture of James' relationship with the blonde femme fatale type again or Dale and Annie's gag inducing sugar sweet courtship. Cooper had a naughty streak at the beginning and you could see it in his flirtations with Audrey . . . ah, but I've lamented all this before.

Posted by Setsuled at 7:07 PM
Email ThisBlogThis!Share to TwitterShare to FacebookShare to Pinterest