The Bad and the Captured 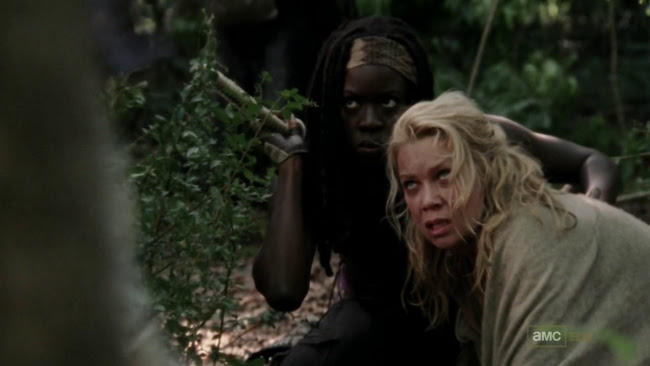 I finally finished season three of The Walking Dead a few days ago and while I still feel it was generally weaker than season two its final two episodes were much better than I'd hoped for.

Spoilers for Walking Dead season three after the screenshot. 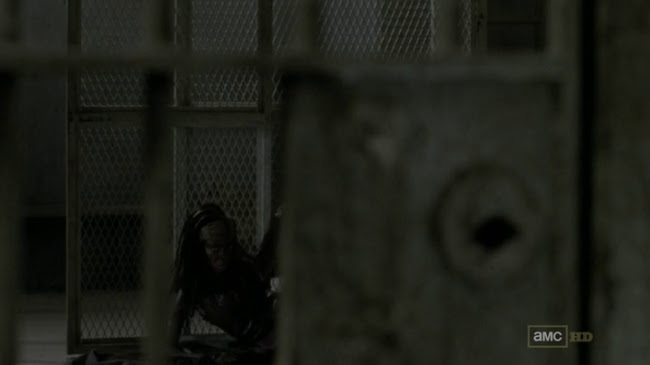 It was a season filled with change: there's a new character, Michonne (Danai Gurira), who was captured and had her sword taken away by the new villain known generally as the Governor (David Morrissey). She escaped and was later captured by Rick (Andrew Lincoln) who took her sword away. But then Rick sets her free. Then the Governor offers Rick a deal where Rick would give him Michonne in exchange for the safety of Rick's people. Rick is going to at first but decides not to--however, Merle (Michael Rooker) captures Michonne and takes her sword away. But then Merle lets her go and sacrifices himself while Michonne walks home. 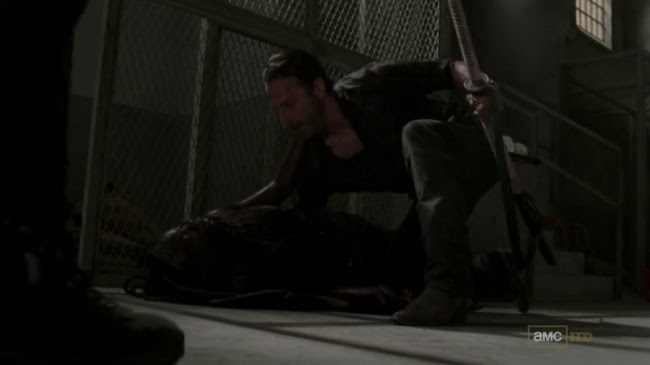 Okay, so there was a lot more to the season than that but it was pretty disappointing that the character who seemed like she might be pretty cool ended up basically being a sack of potatoes. I should note that Andrea (Laurie Holden), Glenn (Steven Yeun), and Maggie (Lauren Cohan) were also captured over the course of the season--Andrea slept with the psychopath first and the same psychopath made Maggie strip for him when she was captured. Glenn had the snot beat out of him. Daryl (Norman Reedus) and Merle were also briefly captured. The reason I'm dwelling on this is just how remarkable I find the gender roles on this show so sharply demarcated and that the ostensibly badass, independent, self-sufficient women are constantly being symbolically castrated or otherwise humiliated.

Apart from that, I hated the melodrama of the war between Rick's people at the prison and the Governor and his people. The worst was the third to the last episode of the season where Andrea tried to reach the prison to warn them the Governor was going to betray them and every step of the way the Governor was magically able to find her. I did like the idea of Andrea and the rest of the original group ending up accidentally on opposite sides, and it seemed like a good opportunity to have the characters deal with people on both sides having killed people on the opposite--Andrea shot one of the nice prison inmates and Rick's team shot a nice young lady Andrea taught how to shoot. None of this is directly addressed, though, and this aspect of the season's themes were dealt with best in one of the season's two best episodes, two episodes that were so completely better than the rest of the season--"Clear" and "This Sorrowful Life", the only episodes of the season written by Scott M. Gimple who I understand became showrunner later. 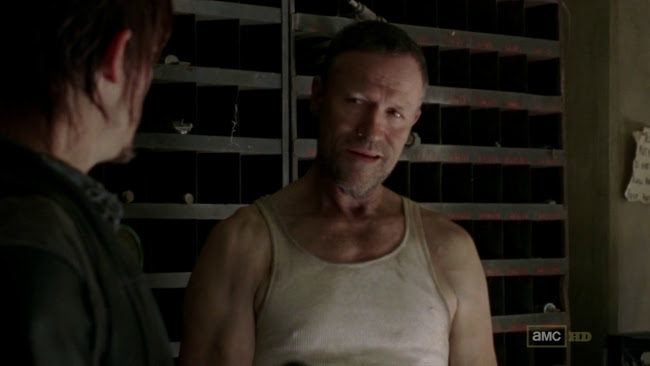 He killed my favourite character, Merle, in "This Sorrowful Life". Merle was my favourite in season one because he was such broad character played with complete abandon by Michael Rooker--a thorough, disgusting racist asshole with absolutely no apparent shame. But I grew to like him in season three for different reasons. He feels almost like a different character and I liked the relationship between him and Daryl. Daryl's hallucinations in season 2 made it seem like Merle bullied Daryl but we learn in season 3 that both brothers were abused by their father and that Merle left home before the quieter, weaker brother. It's true "This Sorrowful Life" has yet another example of Michonne getting captured but the two Gimple episodes are the only ones where Michonne actually gets to interact as a character with the others, aside from the time she stabbed the Governor in the eye. Gimple's episodes put her in a maternal role, first acting as big sister to Carl in "Clear" and then acting as a surprisingly sympathetic ear for Merle in "This Sorrowful Life". 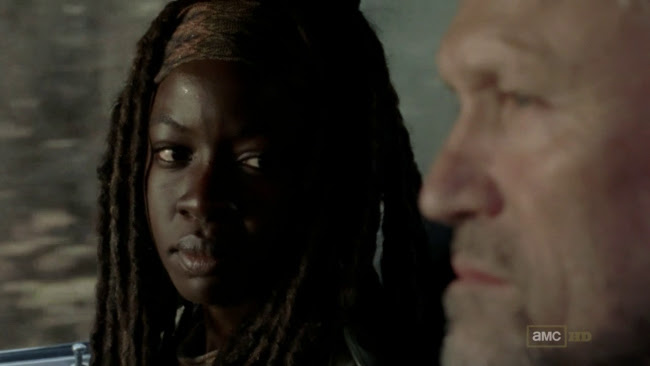 I love that the show didn't just sweep the tension under the rug when Merle joined the same team as Glenn, the guy he'd tortured in an earlier episode. Rooker's performance is a big part of what makes "This Sorrowful Life" work and we can see in him just how hard it is to live with the fact that you've done something horrible you can simply never atone for. Michonne sees him for what he is--everyone else assumes Merle's always been a killer but Michonne calls him out on his bluster and what a truly thin defence it is against the cognisance of his own actions. I guess given his dilemma his death was inevitable but it would have been nice to have him around longer to see where his development might have gone.

They say the lobster captures lamps in suns.
The eye enclosed its walls with anticlocks.
Like tears, the coldest air condensed the sums.
In traces left on broken lava rocks.
A single print inhabits white lockers.
Without a word the buckled belt arose.
A shirt is fine without some brown Dockers.
A kangaroo defeats the static pose.
The questions asked in socks can foot the step.
The Appalachian apple sauce is mashed.
Diffused in filters like a cat too hep.
In plastic cups the softened pear was stashed.
A starfish button chose in five shires.
A universe condensed in stove fires.