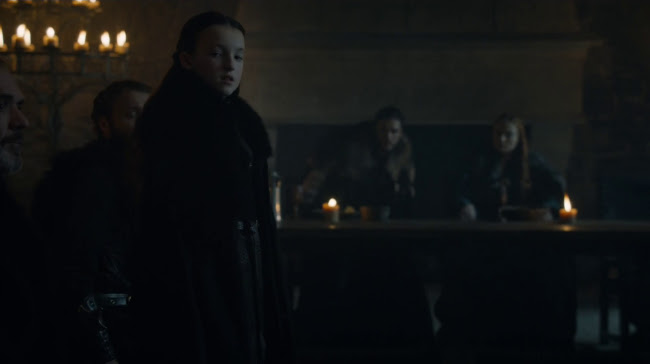 Well, it's time to pack up the dragons and box up the White Walkers for another year. But don't worry, kids, your old pal Game of Thrones will be rumblin' into town 'bout this time again next year. So let's talk about that finale and I'll start with my favourite part:

Spoilers after the sexy screenshot. 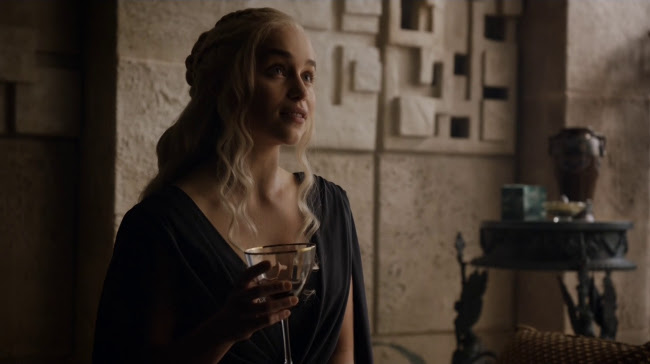 Daario who? I'm only half joking--I kind of have to struggle to remember how Daenerys met him and why he's important. I think we're meant to consider how heartless Daenerys is becoming from the fact that she doesn't care about cutting him loose but could it simply be he's very dull? Her breaking up with him and not feeling much about it doesn't seem cold or harsh, it just seems reasonable. It seemed pretty clear all along he was a boy toy with no potential for more. It doesn't help that he was played by two different actors who bore little resemblance to each other and it didn't seem like a big deal. Could you say that about any other character on Game of Thrones? Certainly not Tyrion. 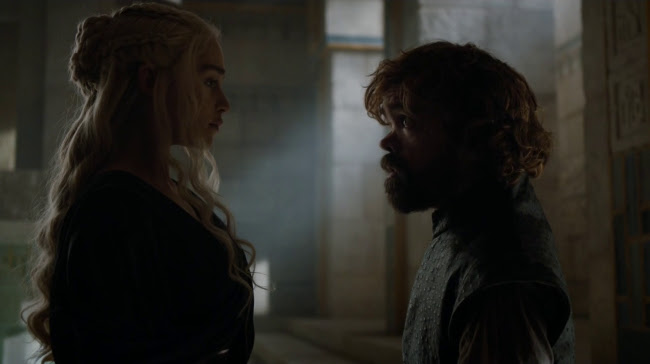 Tyrion hasn't had a whole lot to do this season but Peter Dinklage gets every thing he can out of every line and then some. I doubt I was alone in wanting Tyrion and Daenerys to start making out in this scene. Not just cuddling and kissing, but clothes tearing and slobber.

That being said, I still prefer Cersei over Daenerys. 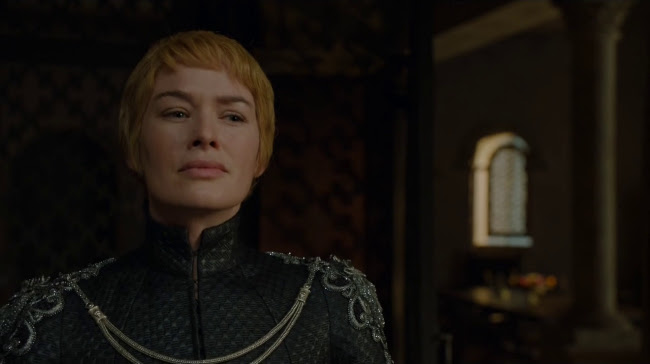 It's nice for women to get to be Henry IV but it's great for a woman to get to be Richard III. Of course, feminism won't truly be able to proclaim final victory until a woman gets to be Falstaff but I think we're still about a decade away from that.

So the internet rumours that spread like, well, wild fire that Cersei would use Wildfire to blow up a building with her enemies inside turned out to be right on the money. Poor Margaery was magically able to guess Cersei and Tommen's absence meant everyone was going to die but it was only to give Natalie Dormer a grace note because she died anyway. The whole thing was kind of marred for me, though, by a really big disappointment. 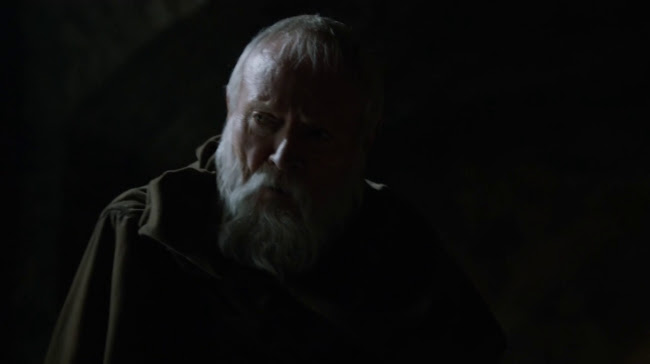 I was wrong about the surprise Dorne attack but I don't really care. What I do care about is I was wrong about a prediction I made a very long time ago that you probably don't remember, that Grand Maester Pycelle was going to end up playing a really significant role in the end of the series. I thought, why else give him a secret life where he's not as decrepit as he acts and why else cast Julian Glover? With that set-up, I figured, just killing him off at random would be really disappointing.

And it was. Well, at least he spent some time with a particularly beautiful prostitute in this episode. 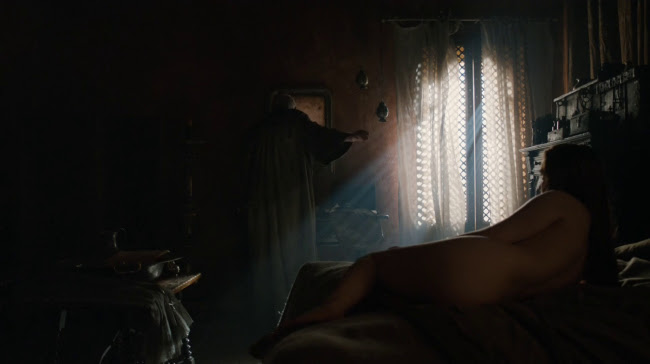 I know what you'd say--this is Game of Thrones. People die without warning, cruelly snatched away by this unforgiving harsh world. Well, not really, particularly not this season which has been all about wish fulfilment. The fact is, I was just the only one who actually cared about Pycelle. While everyone can rest snug in their beds, secure in the knowledge that Daenerys will never get the ax because the creators like her as much as we do, those of us who like unpopular characters drew the short straw. 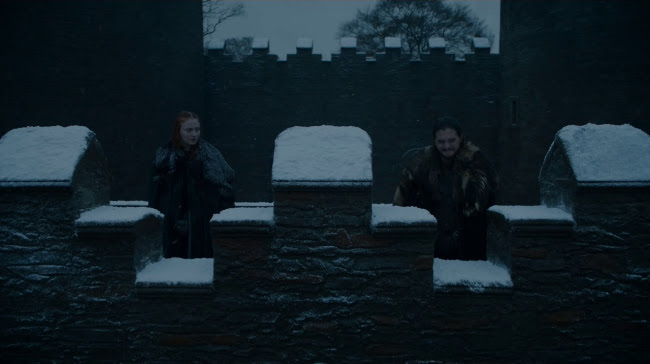 But what about the Starks, you say? I say; admit it. You don't like the Starks. I was happy to see Arya get to be Titus Andronicus in last night's episode but I think if everyone were more honest with themselves they'd see that the Red Wedding was much, much more satisfying than last night's episode. It made more sense, for one thing--just what the hell is going on with Arya now? Did she flunk the assassin school or didn't she? Did the guy want her to fail, was failing actually succeeding? Is she even Arya or someone else wearing her face, as internet rumours suggest? Honestly, any explanation would be as good as another at this point. And sure, the creators can say it'll all make sense eventually in the future but Arya was more fun when she was a point of view character. When we don't what's going on with her we're outside her point of view. 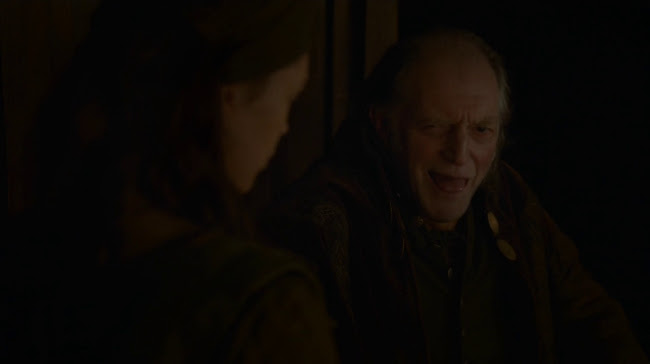 Jon Snow continues to prove Ygritte right regarding how much he knows (nothing) and yet continues to be incredibly lucky. Sansa says she should have told him about Littlefinger and the Eyrie but doesn't explain why she didn't. Jon infers it's because she didn't trust him and explains to her now it's very important they trust each other because they're up against deadly foes. So Jon's takeaway from Sansa's warning him not to underestimate Ramsay and then nearly getting killed because he underestimated Ramsay is that Sansa underestimates their enemies. Gods, what a twit. 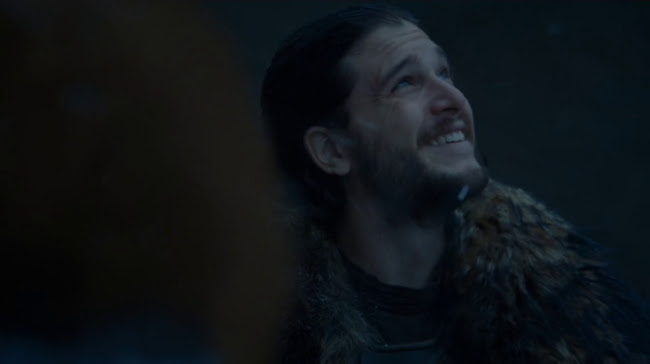 Earlier, Davos brings his miraculous insight about Melisandre to Jon in the form of a burned toy stag. Luckily for Davos, Melisandre spares him having to supply his complete lack of evidence and freely admits she participated in the sacrifice of a little girl to her god in the hopes of winning against Ramsay. She explains she's ready to die any time but reminds Jon she could be very useful against the White Walkers. So Jon, ignoring the fact that he himself and his resurrection are tangible evidence of the Lord of Light's power and thus a sacrifice in a completely hopeless situation isn't exactly a cut and dried murder, decides Melisandre probably deserves to die but since she's useful to him he lets her live . . . in exile. Where she presumably won't be useful to him. He basically went out of his way to thwart himself.

That's okay, because a little girl convinces everyone in the north to rally to Jon. But Pycelle had to die because this is harsh reality. 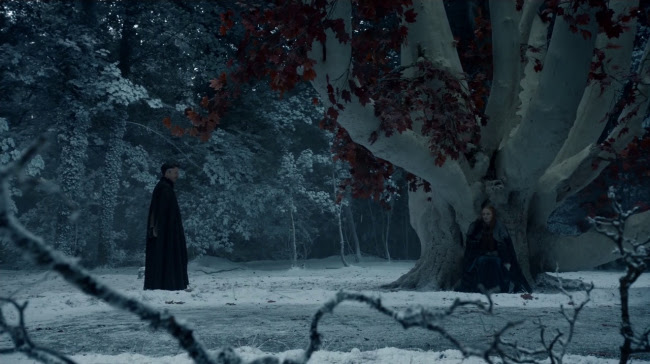 Posted by Setsuled at 12:24 PM
Email ThisBlogThis!Share to TwitterShare to FacebookShare to Pinterest