Well, I said having been studying the English Civil Wars didn't seem terribly relevant to the Brexit, but then I read this article about the potential for London to leave the UK, from before the Brexit vote, which quotes a professor as saying, "If we vote to leave the EU it will be an event, in the scale of things, a bit like executing Charles I. It would be something so profound to the British understanding of themselves and their capacity to understand how they want to govern themselves." Now the idea of London leaving the UK is actually gaining steam.

It does seem strange that London, Scotland, and Northern Ireland should be held hostage by England. In more ways than one. Of course, many other parts of England voted to stay in the EU--like Liverpool, a place with a pretty famous history of immigration.

If someone floated the idea of London leaving England a hundred years ago, the idea would have been preposterous. People would ask, what would London do about food and manufactured goods? It goes to show how much these things have come to rely on imports. It looks like the UK imports a lot more than it exports, mainly from Germany, the US, and China. Without the rest of England, I doubt London would be exporting very much at all. Well, there's a whole mess of questions about what London would have a claim to outside the city limits.

But okay, how does this compare to the Civil Wars? London was solidly for Parliament, meaning the Roundheads, in the 1640s with the London militia providing the best soldiers before Cromwell formed the New Model Army. The country was roughly divided between north and west for the Royalists and the east for the Parliamentarians. 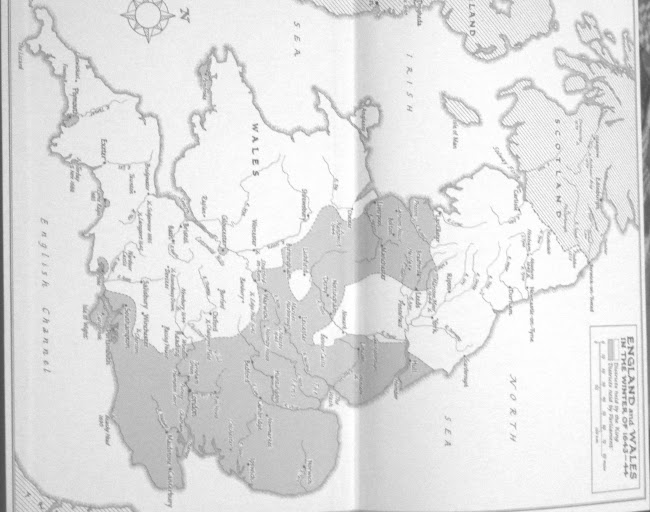 No real resemblance to the Brexit vote map. It seems things do change in 372 years.

It may be more interesting to think about how philosophically the factions match up. The Parliamentarians were more open to immigration so long as the immigrants weren't Catholic--Oliver Cromwell allowed Jews to return to England. Meanwhile, one of the main complaints against Charles I (and Charles II) was his spending tax money on foreign interests which were not favoured by the people of England. The Navigation Acts instituted in 1651, which sought to impose trade restrictions that favoured England, were reaffirmed by the Restoration government so this is a point where the Roundheads and the Cavaliers were more or less in agreement. Attempting to enforce such laws would seem ridiculous to-day.

If some new version of the UK were created by an alliance between London, Scotland, and Northern Ireland, first of all it would certainly be an enormous difference from how countries were normally formed. I guess London as a foreign state in the middle of England would be a little like Rome used to be in the middle of Italy until 1870 when Italy finally took it. It's hard to imagine England being able to organise and capture London.

Inside the nodding noodle sculpture cheese
Awaits in dairy dalliance for mouths
To taste of torpid pineless cones appeased
By blue and red and scores of Brandon Rouths.
In stacks of cut in-seams the minds repay
The thoughts abashed on Earths remade for steel
Or alloyed teeth in copper clasped array,
Or zipper called in denim lands appeal.
Aquatic chamomile secreted west
A wren indignant now that supper quells
Rebellion yanked in time for discount Crest
And pastes for tusks too big for decent swells.
Kaleidoscope inspection sifts through minds
Invested long in tips for rubber binds.