The Innocence or Guilt of Shape 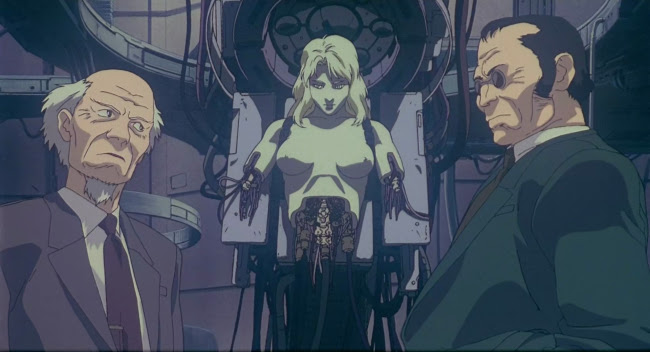 I started following Rian Johnson's Twitter yesterday, the director of the upcoming Star Wars: Episode VIII and a very nice low budget neo-noir called Brick. He also directed a movie called Looper I haven't seen yet but on the basis of Brick I'm very much looking forward to Episode VIII. He's a director with real vision and honest style, something that's increasingly rare in Hollywood. And his tweets are pretty good.

I saw on May 9th he retweeted this very interesting article by Emily Yoshida on the upcoming live action adaptation of Ghost in the Shell. It's the first properly written article I've seen that addresses the fact that Kusanagi was never meant to look Asian. But instead of supporting the casting of Scarlett Johansson, Yoshida still thinks it's a bad idea. She also mentions that a Japanese actress shouldn't play Kusanagi, ultimately saying that Ghost in the Shell shouldn't be an American production at all. Well, I agree in the sense that it's kind of a pointless remake. There's nothing wrong with the original and indeed, British and American filmmakers aren't likely to have the same sense of Japanese cultural history that subtly informs the aesthetic of the film. I'm not sure I agree that's necessarily a bad thing or a good thing. It's just another thing. I don't think every story has to be an authentic representation of an existing culture. A futuristic, cyberpunk world that presents a cultural mishmash in particular seems like fair game for alternate interpretations. The post World War II cultural history of Japan, which Yoshida goes over pretty eloquently in discussing how anime reflects it, is present in the original Ghost in the Shell probably incidentally to the filmmakers' intentions. I don't mean the obvious things like Japanese signage and conversation customs but the things Yoshida refers to like the history of the anime style, its ancestry in Disney art and how this reflects a Japanese culture assimilating American culture.

Yoshida posts a video where a man interviewed various people in the street in Japan asking about the casting of Johansson and about the rejection of an Asian actor for an upcoming adaptation of Death Note:

Yoshida says these interviews are "predictably depressing" and I agree with respect to the girls who think a white actress would be more beautiful. But I feel like Yoshida is actually exhibiting the very arrogance that criticisms of cultural appropriation were originally meant to examine when she subtly implies all Japanese people should be ashamed of themselves for wanting to see a white actress in a U.S. adaptation of a Japanese film.

Japanese audiences, unlike American audiences, don't understand Motoko to be a Japanese character, just because she speaks Japanese and has a Japanese name. This speaks to the racial mystery zone that so much anime exists in, allowing viewers to ignore such unpleasant dynamics as oppression and discrimination even as they enjoy stories that are often direct responses to those dynamics.

Is it really anyone's place to tell Japanese people how they ought to feel? One of the women interviewed mentions how blonde hair only suits white people. I was thinking about Ritsuko in Neon Genesis Evangelion, a Japanese woman with blonde hair, not because she's in the stylistic mystery zone Yoshida refers to but because we learn via flashback that she dyes her hair. Does this make Ritsuko a tool of cultural oppression? I think this would be an ironic statement to make when talking about Ghost in the Shell because I think one of the things that movie shows is that a new culture is born on these old symbols and effects of old cultures. This "mishmash" is dizzying precisely because the new people born in this time grow up internalising and liking things that, while they may be products of war or oppression, now have completely different meanings, have accumulated new significance or may have been stripped of significance entirely except for aesthetics. Sometimes blonde hair is just blonde hair.

Anyway, speaking of the influence of technology in modern culture, I wrote this to-day:

Revenge apparently is served in void.
All grievances redressed without notice.
A tale that's told in hopes to woo a droid.
Like Dee and Dum exhorting young Alice.
No cause in blunt effect, a flash in cold.
Unmet, connexions fried beyond the deep.
A public wank insists that life is sold.
Into a fungal brain the kittens creep.
On roads that grow more dry the numbers fall.
A funnel draws the stars from gutter rain.
In trees the eyes pretend that stumps are tall.
A dip in graphs demands returns in pain.
As bodies turn to fingers cut from grace
A hardened sugar skull dissolves its face.