To Dream is Better 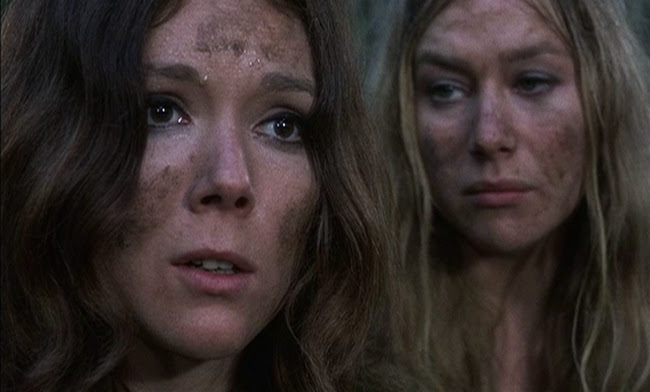 Is love only a pose, are the most passionate feelings of which the human heart is purportedly capable arbitrarily assigned by nature and circumstance? This is what makes William Shakespeare's A Midsummer Night's Dream really more nightmare than dream. Believed to have been written around the same time as Romeo and Juliet, it's arguably a devastatingly insightful parody of the kind of romance Romeo and Juliet exemplifies. I watched a very good 1968 adaptation last night. 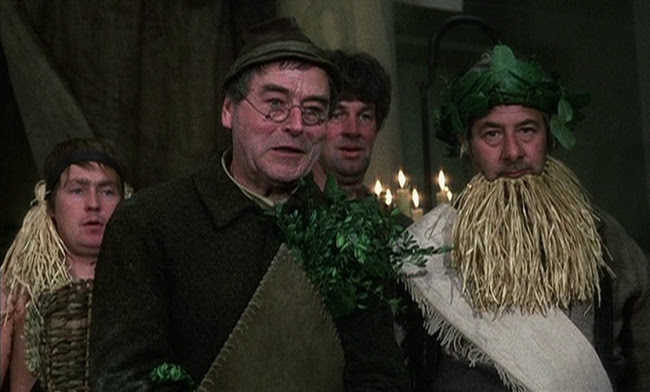 Of course, a direct parody of Romeo and Juliet might be seen in the rendition of Ovid's tale of Pyramus and Thisbe presented at the end of Midsummer Night's Dream. People point out that the story of Romeo and Juliet resembles Tristan and Isolde but Shakespeare himself may be pointing out a far earlier inspiration by invoking Ovid's tale here where the tragic double suicide of lovers is enacted by fools, one of whom is a confirmed ass, for the amusement of the main characters of Midsummer Night's Dream and at the behest of one of the play's two central patriarchs, Theseus, the Duke of Athens (here played by Derek Godfrey). 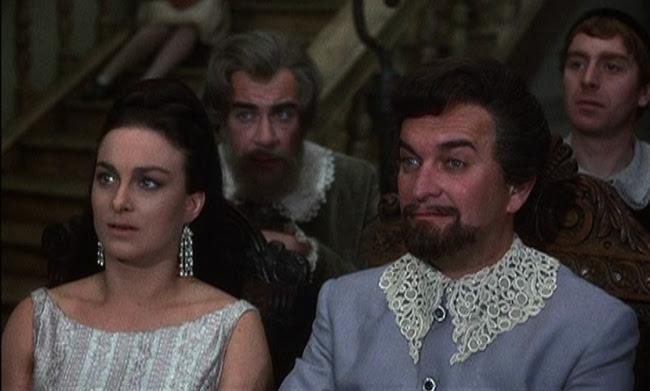 After the night's strange events, Theseus makes a famous observation about lovers.

The lunatic, the lover and the poet
Are of imagination all compact:
One sees more devils than vast hell can hold,
That is, the madman: the lover, all as frantic,
Sees Helen's beauty in a brow of Egypt:
The poet's eye, in fine frenzy rolling,
Doth glance from heaven to earth, from earth to heaven;
And as imagination bodies forth
The forms of things unknown, the poet's pen
Turns them to shapes and gives to airy nothing
A local habitation and a name.
Such tricks hath strong imagination,
That if it would but apprehend some joy,
It comprehends some bringer of that joy;
Or in the night, imagining some fear,
How easy is a bush supposed a bear!

It's tempting to impute this opinion to Shakespeare himself but it's more valuable to remember the character--the Duke controls the lives of the young lovers. If Demetrius hadn't changed his affections to Helena, the Duke had threatened to punish Hermia:

Either to die the death or to abjure
For ever the society of men. 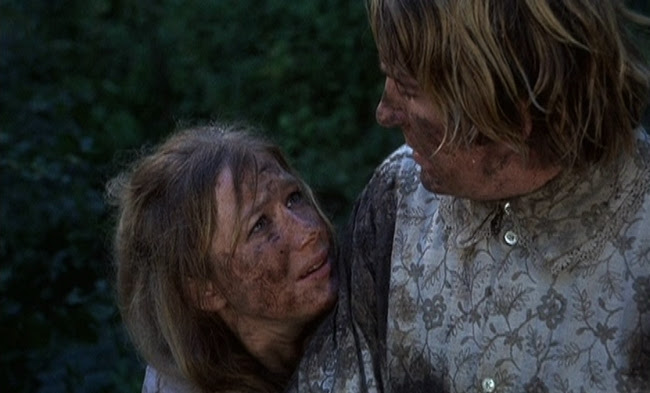 When, under influence of the faerie spell, Lysander says he won't kill Hermia even though he hates her and she responds, "What, can you do me greater harm than hate? Hate me! wherefore? O me! what news, my love!" Helen Mirren in the 1968 film delivers these lines with effective heartbreak. One wonders, if the spell only makes Lysander love Helena, why should it make him hate Hermia? It's as though the memory of his own previous love is a hateful thing to look on, as though it suggests something disturbing.

The love spell is an element from Tristan and Isolde not present in Romeo and Juliet. In Wagner's opera version of Tristan and Isolde from the nineteenth century, the potion functions as a revealer of true human nature behind the mask of civilised custom and so we might take it in Midsummer Night's Dream. The spell has its source in the film's other central patriarch, Oberon, king of the faeries. And what does Oberon want, why is he doing this? He's jealous of an orphan child his queen Titania has taken in. One might expect his response would be to use the love potion to make Titania devote herself to Oberon and ignore the child. Instead, he makes her fall in love with an ass. 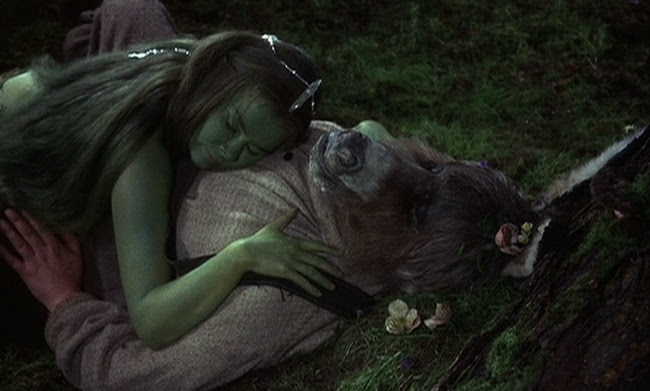 His purpose is similar to Theseus' in lumping lovers, madmen, and poets together as delusional, helpless victims of emotion--he wants to show Titania how meaningless and arbitrary her love is. And Theseus is talking to his fiancée and Oberon is talking to his wife! You might think the last person you'd want to convince love is meaningless is your spouse, unless, of course, you're asserting the control of a cool intelligence over the anarchy of feeling. Madmen and poetry might be just as threatening to a ruler. 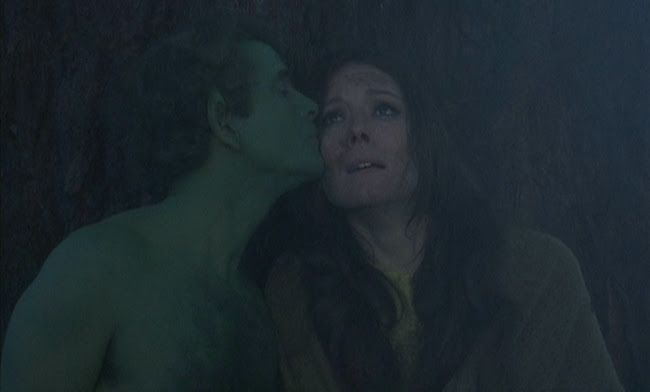 Hermia says Lysander can do no greater harm than hate her but she doesn't try to kill herself. No-one does, however intense their feelings. The faeries are anthropomorphisations of nature and the love spell then like the capricious nature of the heart. The 1968 film is directed by Peter Hall, a theatre director, which may explain the film's biggest flaw, which is its overuse of close-ups. I suspect his thought process must have followed from him asking himself what he can't do on the stage that he might take advantage of in film--of course, close-ups. It adds to the dreamlike quality of the film, though, making the forest feel more like an interior world, the actors faces often obliged to be close together, intensely intimate. Hall has the faeries painted green and they seem to blend into the foliage, an effective reflection of the fact that they are articulated nature. 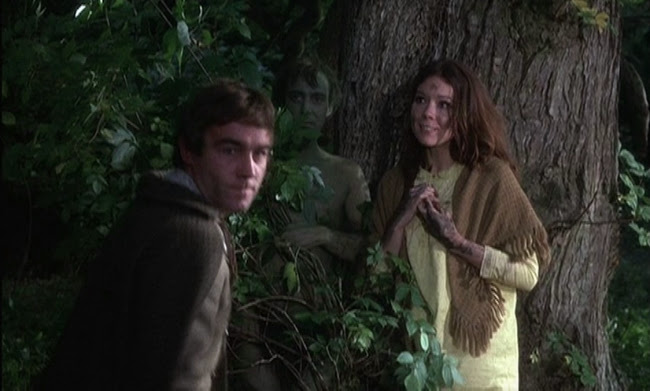 The cinematography is by the great Peter Suschitzky (he of The Empire Strikes Back, The Rocky Horror Picture Show, and most of David Cronenberg's films) who displays his genius for using flat, dark colours and small pockets of glimmer. Scenes with the faeries are often backlit by obtrusively artificial lights. 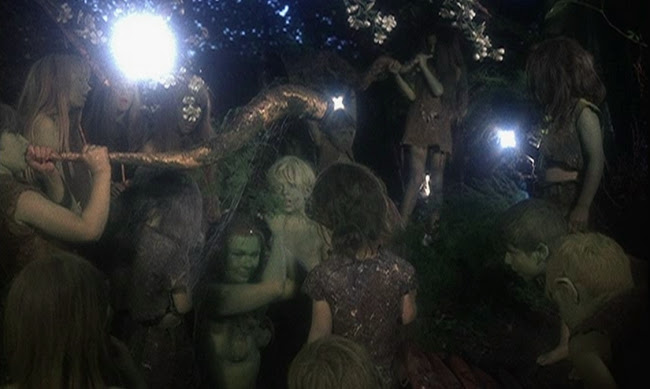 This is surely the greatest cast ever assembled for a film of A Midsummer Night's Dream, one of the greatest casts of any Shakespeare film adaptation in history--Helen Mirren, Diana Rigg, Judi Dench, Ian Richardson, Ian Holm, and David Warner are all in this film. And Demetrius is played by Michael Jayston whom Doctor Who fans might recognise as the Valyard. 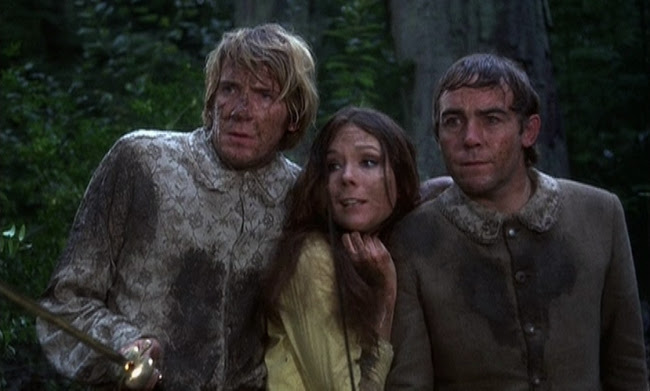 The costumes are sort of vaguely 17th century inspired 1960s--the men with lace collars and knee breeches while the women are basically in 1960s dresses and go-go boots. 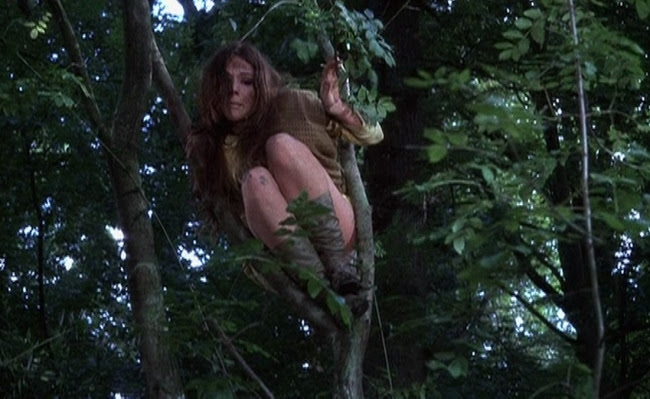 I always prefer period costume but I was okay with this. I think the goal was "unobtrusive" and I think it was achieved. 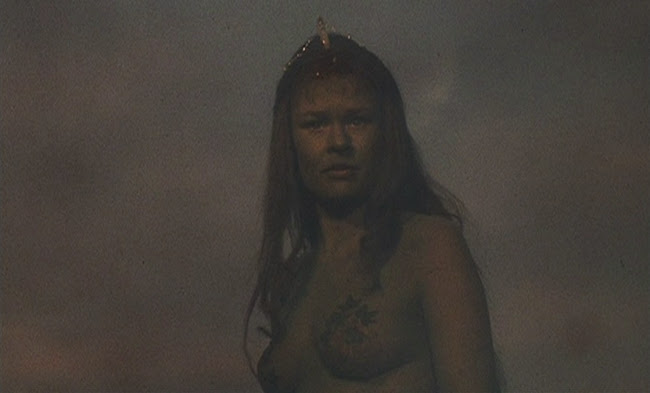 Posted by Setsuled at 6:12 PM
Email ThisBlogThis!Share to TwitterShare to FacebookShare to Pinterest