A Sexy Dame and a Twisted Scheme 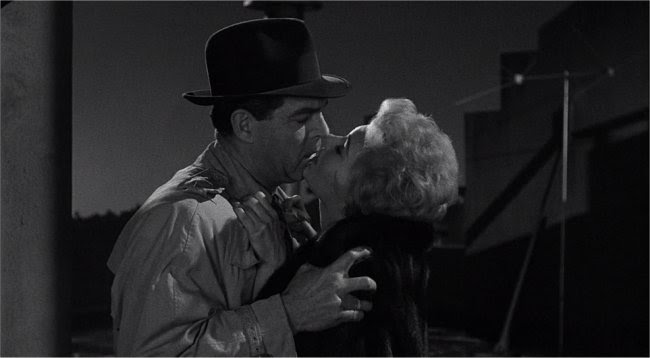 Arguably, the most interesting thing about 1954's Pushover is all the movies it's not. A film noir starring Fred MacMurray, it very obviously invites a lot of comparisons to Double Indemnity, comparisons that vividly highlight Pushover's flaws. But there are also strange echoes of great Alfred Hitchcock movies that hadn't been released yet, Rear Window and Vertigo. Pushover was Kim Novak's first film in a credited role. She's captivating; beautiful, sexy, and ethereal, and it made me think how perfect she was for Vertigo, really better than Hitchcock's first choice for the role, Vera Miles. Something about Novak's manner suggests her peculiar type of femme fatale; a kind of forceful artifice, an unabashed cunning and a paradoxical simple-heartedness. In his book length interview with Alfred Hitchcock, Francois Traffaut talks about Kim Novak as having, "an animal-like sensuality. That quality is accentuated, I suppose, by the fact that she wears no brassiere." Hitchcock replied, "That's right, she doesn't wear a brassiere. As a matter of fact, she's particularly proud of that!" 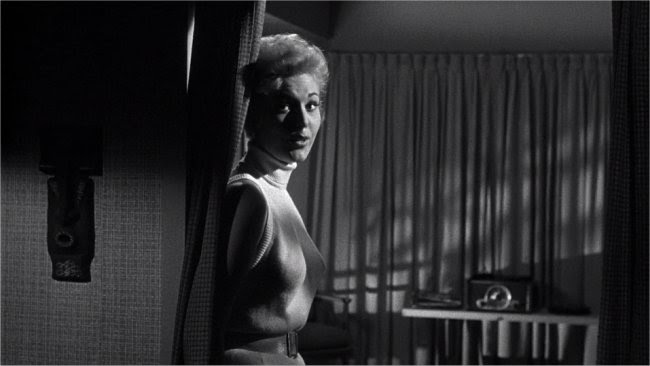 The absence of a bra is really obvious in the scene where Novak's character in Pushover, Lona, first takes home MacMurray's character, Paul. Like in Vertigo, he's a detective who's been hired to spy on her, though in this case sex seems to be "part of the plan"; there's the implication that Paul seducing and sleeping with her is all part of the undercover operation sanctioned by the department. This may have seemed slightly less morally repugnant to the audience because MacMurray maintains a professional, disinterested attitude while Novak exudes carnality, but it would be a mistake to conclude absolutely the filmmakers see nothing wrong with Paul's actions or the institutional support for them. It then turns out that Paul and his partner, Rick (Phil Carey), are conducting a long-running stake out of Lona's apartment with binoculars across the street--and think nothing of spying on her neighbours. We overhear some crude comments from a couple other detectives about the physical attributes of one of the other female tenants. There is a sense director Richard Quine is subtly criticising the presumption of moral authority that sanctions the kind of voyeurism these men indulge in. 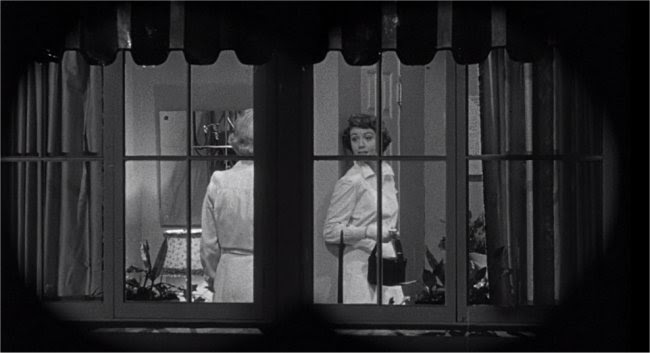 The shots remind one strongly of Rear Window, a film that would be released three months after Pushover. Something must have been in the air in Hollywood or, more likely, overheard at lunches. But Pushover lacks Hitchcock's style and subtlety that draw the viewer in to contemplating troubling questions.

Dorothy Malone has a role in the film as Lona's disappointingly straight-laced next door neighbour, Ann, with whom Rick starts falling in love after shamelessly peeping on her for weeks. Every time she's introduced into a shot, the score lamely switches to peaceful, pretty strings, making sure the audience is constantly reminded just how innocent and pure and good and sweet Ann is. The lack of nuance is the main problem with Paul, as well. His deciding to turn crook early on and then spend most of the movie improvising as his schemes fall apart is all distinctly reminiscent of Double Indemnity. But Paul lacks all of Walter's heart. Paul just seems to be coldly using everyone; the filmmakers either failed to recognise or didn't care that part of what made Walter's transgressions in Double Indemnity so fascinating is that he was also the man who cared about Dietrichson's daughter and who had a genuine and sweet friendship with his boss, Keyes. There's never really a sense of love between Paul and Rick though some effort is made to show the two have a moderately comfortable partnership. 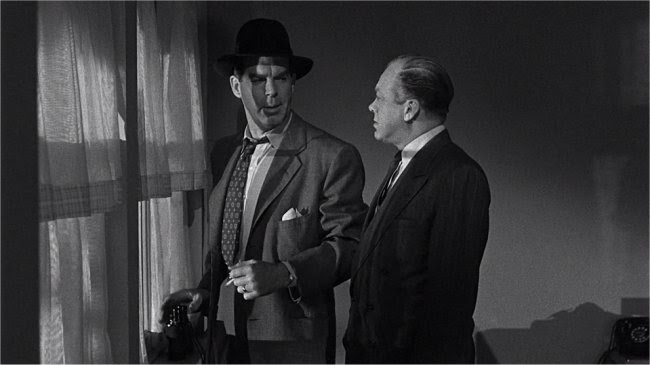 Ultimately the film comes down as too simplistic to be a truly great noir but there's a lot to admire in it, too. Pushover is available on The Criterion Channel.