There are Places I Remember Inaccurately 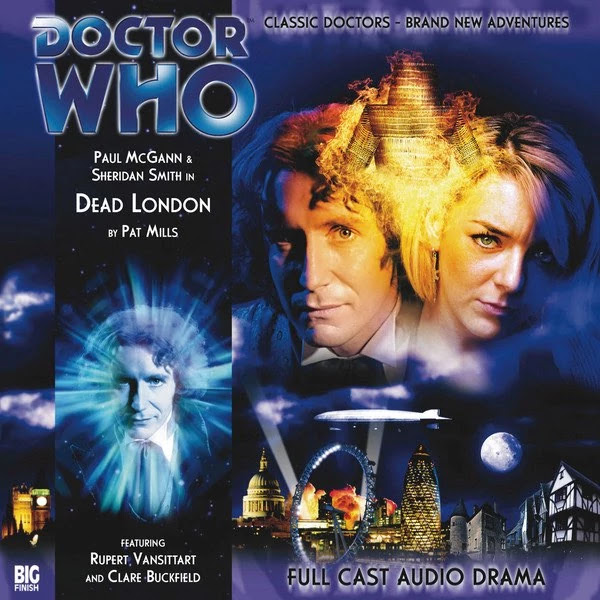 It's one of those days when all kinds of different historical periods are jumbled together in the 2008 Doctor Who audio play "Dead London". The first episode in the Eighth Doctor's second stand alone series, he returns with the nice enough companion Lucie Miller for a story that, at under fifty minutes, feels too short, as most of the stories in this particular series of audios do.

The first scene drops us into the Old Bailey where the Doctor (Paul McGann) is on the dock, answering for the crime of leaving the TARDIS in the middle of traffic while Lucie (Sheridan Smith) was away shopping. What started as a modern day preceding unexpectedly becomes a 17th century one and the Doctor is sentenced to death. Meanwhile, Lucie encounters similar problems on the streets of London, one of which, Fleet, unexpectedly transforms into its river namesake.

There's an amusing supporting character played by Clare Buckwald called Spring Heeled Sophie, presumably a reference to Spring Heeled Jack. Though I'd have enjoyed her character more if her voice were more distinguishable from Sheridan Smith's. I also enjoyed a reference to The Wicker Man when the Doctor and his companions find themselves suddenly in a Wicker Man about to be torched in pagan Britain.

On another subject, to-night is the final episode of Game of Thrones so I figure this is my last chance to make predictions. All my predictions so far this season have been wrong but I figure that's no reason to stop now (spoilers for past episodes ahead).

I think the reason we never saw Danaerys' face during her rampage last week will be explained by the fact that she'd lost telepathic control of the dragon--she told it to go for the Red Keep but all he heard was "Urg, rage, kill, kill!" and decided to burn civilians instead. I predict there'll be a shot of Drogon pulling the Iron Throne from the rubble. And I suspect that Bran might do something with time travel and alternate time lines since that kind of thing seems to be popular right now.

What do I hope will happen? That Cersei ends up being alive and rules long and benevolently on the Iron Throne. I wonder how many people would sign an angry petition about that.