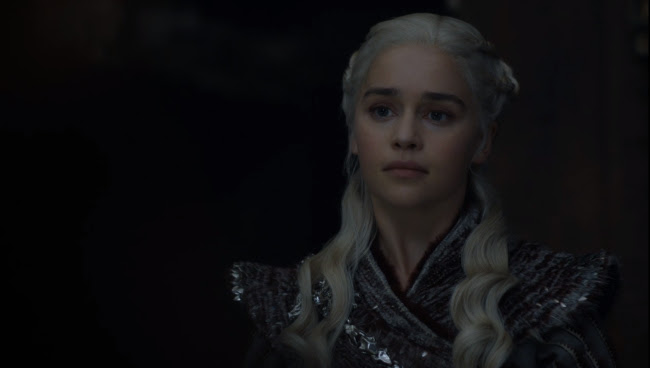 After the moral clarity of a battle with the Night King, Game of Thrones delivered a more dramatically fraught episode last night, "The Last of the Starks", the best episode of the season so far and my favourite since season six. 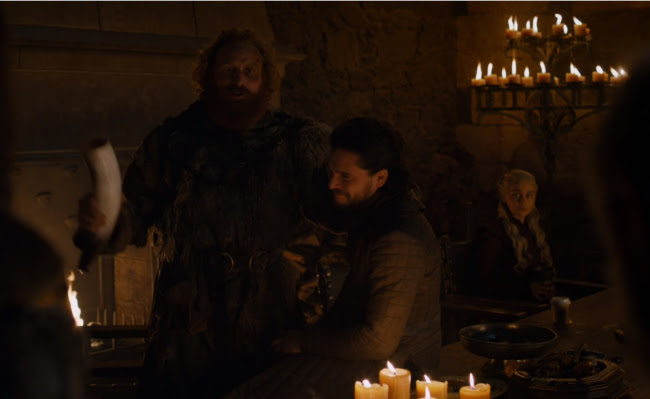 First of all, what a great party (complete with coffee, as sharp eyed viewers observed). It was fun seeing everyone drinking and relaxing, particularly the Lannister brothers and Brienne (Gwendoline Christie). Inebriation finally brings out some of Tyrion's (Peter Dinklage) old cruelty and he loudly informs everyone that Brienne is a virgin, not an observation requiring the keenest of insights. Jaime (Nikolaj Coster-Waldau), fortunately, is more of a gentleman and assists his former captor in changing this lamentable state of affairs. 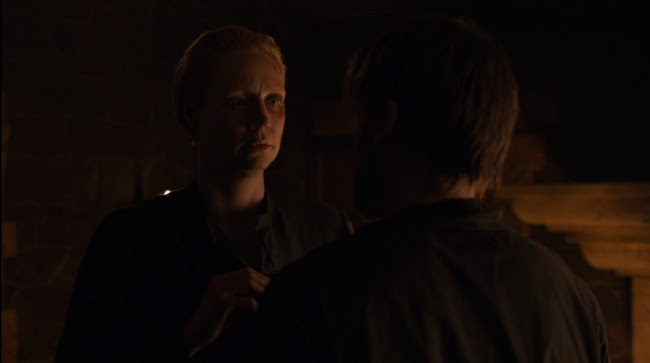 This ends up being a set-up for Jaime's departure for King's Landing. There are evidentially some viewers who believe he's going off to join up with Cersei (Lena Headey) again, despite that prophecy still hanging over Cersei's head about being strangled by her brother. Though that might be difficult for Jaime to accomplish with one hand. Anyway, poor Brienne. 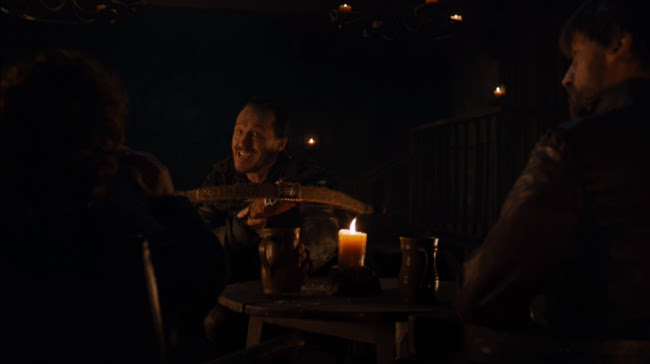 Before he leaves, though, we get the amusing confrontation between the Lannister brothers and Bronn (Jerome Flynn) who basically uses his order to kill the two fellows as an opportunity to demand more money. I do hope we haven't seen the last of him.

It looks like this was likely the final episode for Sam (John Bradley), Gilly (Hannah Murray), and Tormund (Kristofer Hivju), who all make their farewells, which makes sense--none of them really have any stake in Daenerys (Emilia Clarke) taking the throne. Less explicable is the departure of Ghost, the dire wolf. 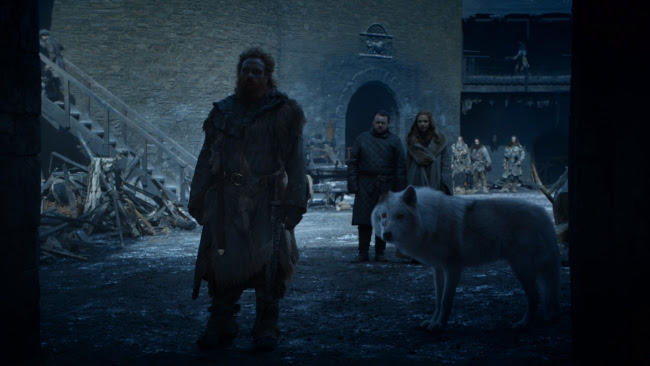 He's aptly named. Watching the rarely glimpsed significant plot element from season one, he's like the ghost of the Game of Thrones we'd have had under George R. R. Martin's unfettered stewardship. Seeing the beast go for no apparent reason seemed symbolic of the show bidding farewell to its book origins finally and totally. The characters say something about Ghost having no place in the south but that doesn't explain why he can't stay at Winterfell. 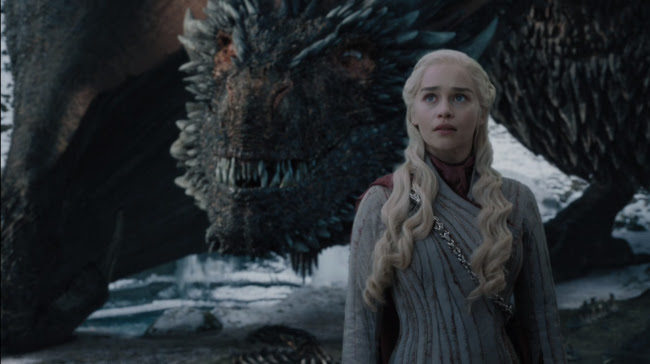 At the heart of last night's episode, though, was Daenerys (in another terrific outfit), who I really started to feel for. Seeing her watch Jon (Kit Harington) being Mister Popularity at the party following her foray into cleverness by making Gendry (Joe Dempsie) a lord and then Tyrion and Varys (Conleth Hill) having a sober (despite Tyrion's vigorous attempts to drink it down) debate about her viability as a ruler all contributed to a dark cloud over her future. It made the usual paradoxes of her character a bit poignantly sad--you could sense everyone's chagrin when she demanded she could use the might of her dragons to force herself as sole reigning Queen onto the kingdom as part of a project to "end tyranny", an evident and all too common contradiction Varys points out to Tyrion as gently as possible. Everyone is finally, belatedly wondering what makes Daenerys such a good bet anyway, and even if Jorah (Iain Glen) were still alive, the writers had long since lost the will or ability to use him as her cheerleader. 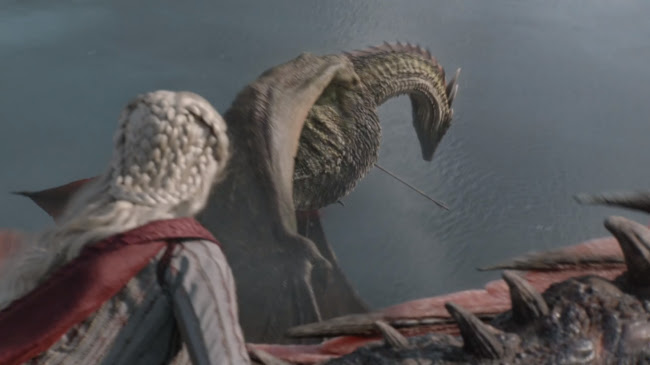 And then Daenerys loses one of her dragons in another stupid surprise attack from Urine--I mean, Euron (Pilou Asbaek). A fleet of ships on a beautiful day like that ought to be visible on the horizon, long before they could get into firing range. Lookouts at Dragonstone should've been able to spot them in ample time, particularly in broad daylight, to say nothing of Daenerys' own ships or the birds eye view offered by dragons. And once Euron is in range, what exactly stops Daenerys from attacking them from behind or above? Plot armour, I guess. 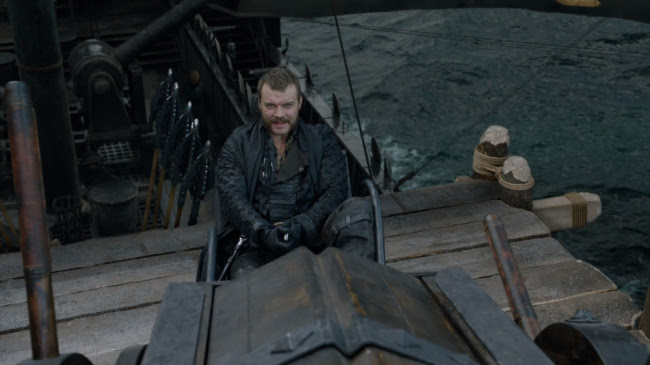 I don't necessarily need a plot to make sense but in a case like this it's crucial. The reason something like the Red Wedding works and something like this doesn't is that the Red Wedding made sense. We knew everyone's motives, we knew how the Starks misread the situation, we knew how it could happen logistically. All of these questions need to be answered because it's painful for people to see their favourite characters get killed. If they get killed for no reason, it's like a cheap prank pulled by the writers. If you show reasons, then it might still be painful but the viewer is forced to recognise how it reflects the way things work in reality, which ultimately makes it a cathartic experience. This is why the best part of last night's episode was the troubling questions surrounding Daenerys' fitness to rule and Jon's complete inability to keep his heritage secret. 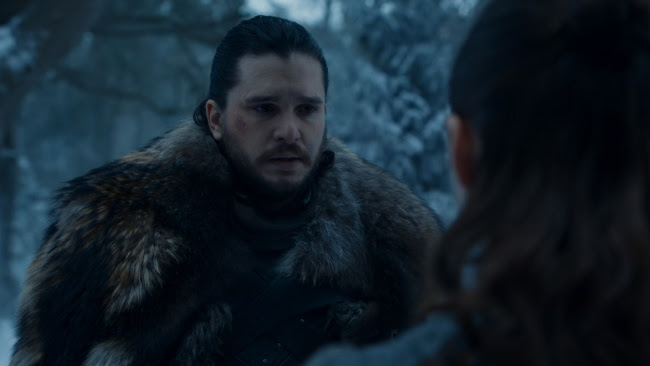 He is such a dope. That's part of what makes him likeable, but do people really want a dope on the throne? It might be nice for a change, I suppose. But no-one really comes off as very clever on the show anymore, I think because Benioff and Weiss simply aren't very clever. Which doesn't necessarily make them bad writers, but I wonder if they were themselves aware that Tyrion was basically responsible for Missandei's (Nathalie Emmanuel) death. 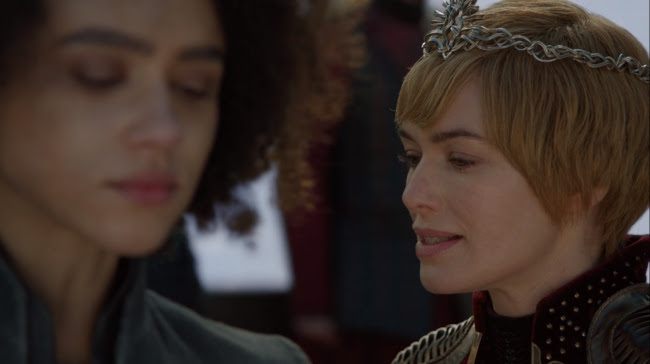 Tyrion walks up to the gates alone, Cersei wants to execute him the spot but she can't bring herself to do it. She really does love her family or, more likely, she doesn't want to be seen publicly doing something so cheap and cruel. Which is exactly why Tyrion shouldn't have publicly declared that the people hate Cersei and Cersei hates the people. After that, any concession Cersei made to Tyrion would be as much as to say, "Yeah, you're right, I do hate the people." Tyrion is talking like someone so blinded by the ideology of his chosen side he longer has any ability to negotiate. This would be more interesting if Tyrion had made one useful contribution in the past three seasons, but at this point he's another character whose capabilities we're supposed to take on faith who continually fails to demonstrate them. Tyrion forced Cersei to choose between executing Missandei and losing public support then and there.

I guess it was sad to see Missandei go. Her and Grey Worm (Jacob Anderson) are both really cute though not the most exciting of characters.

Anyway, it was nice to see an episode that was predominately about thoughtful debate and negotiating emotional stakes. I'm looking forward to seeing where it goes next week.

Posted by Setsuled at 5:54 AM
Email ThisBlogThis!Share to TwitterShare to FacebookShare to Pinterest
Labels: fantasy, game of thrones, television, tv show