The Wall Between the University and the Hairdresser 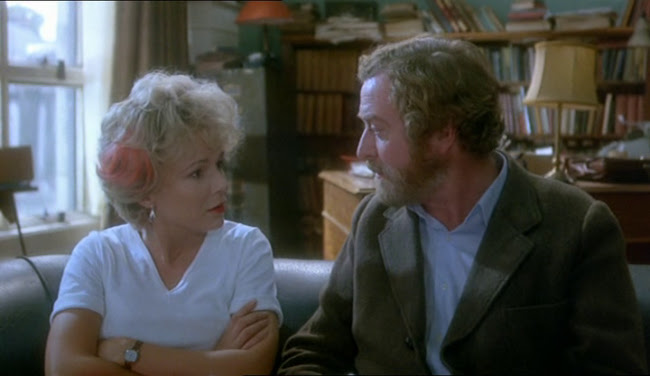 A young hairdresser takes lessons from a dishevelled professor in 1983's Educating Rita. Lightly touching on the class consciousness inherent in conceptions of higher education, the appeal of the film is mainly due to the chemistry between stars Michael Caine and Julie Walters and the gulf between their respective ideas of self-improvement. 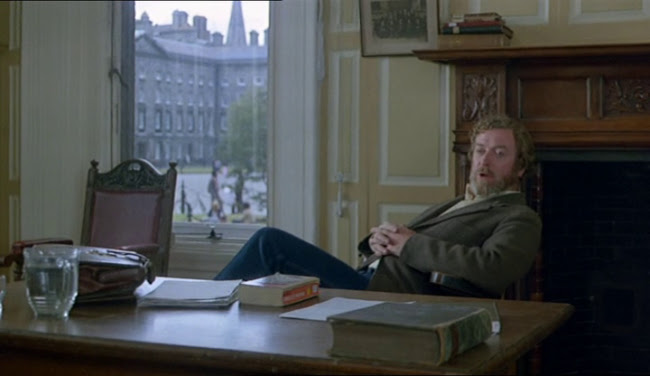 Caine plays Frank Bryant, a literature professor at an unnamed university in England--Trinity College, Dublin served for exterior shots. What a beautiful school. And I loved Frank's office but I was amused at how disorganised his shelves are. 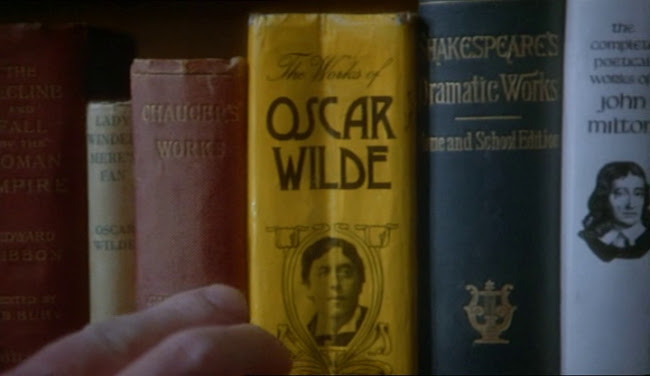 Chaucer between two Oscar Wildes and then Shakespeare and Milton. It's as though someone just decided to stick Oscar Wilde in random spots.

Frank is shown disgusted that one of his students would like to discuss William Blake's metaphysical qualities and wonders why everyone isn't playing outside instead. He seems to have lost interest in his vocation entirely, his disorganised books apparently serving only to hide liquor bottles. Then in walks a pretty working class woman in a tight skirt who calls herself Rita (Walters) though her name is in fact Susan. She wants Frank to tutor her. 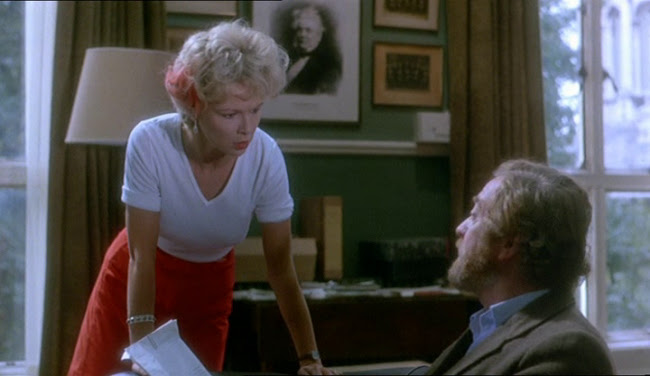 She's so unlike anyone Frank usually interacts with that it's easy to see why he's charmed by her practical advice about the hinges on his door or her inference that there's something dirty about the title of Howard's End. But he imputes something much grander in her simple-hearted, first exposure to the classics. He regards it as a purer love than the carefully orchestrated opinion machines of his students while she is amazed at the students' ability to see so much in a text and discuss it from so many angles. 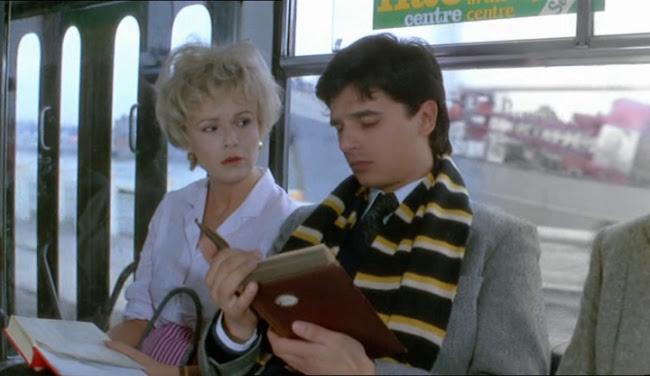 The movie doesn't get into a lot of specifics about critical theory, though it does more than most. He tells her one of her first essays, in which she uses a variety of cheap Romance novels she's read as points of comparison, is fascinating to him but would never pass muster in official examinations. My impression is that academic opinion nowadays seems almost opposite to this, as many voices are keen to discard Chaucer, Shakespeare, Milton, and even Wilde. Like the relationship between Frank and Rita, you could say the grass is always greener in some other critical perspective (though I would say Chaucer, Shakespeare, Milton, and even Wilde have endured for good reason). 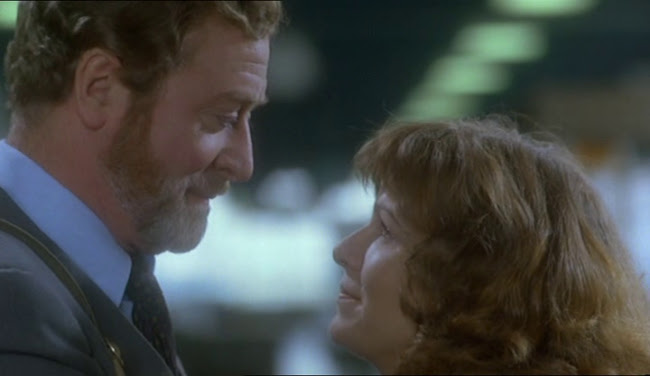 There's some teasing about the idea that Frank and Rita could become romantically attached but it doesn't really feel necessary, they're sweet enough as friends. Caine really does come off as a good teacher--patient and warm but honest and severe when necessary while Walters uses a light touch that makes Rita's determination and uncertainty seem admirable. Frank never quite seems to understand the feeling of being trapped Rita has in her working class family and home where she's expected to have a baby just because she's twenty six. Ironically, his feeling that his students are so disconnected seems due to his being out of touch but the movie could certainly have said more about how reducing beautiful works to lab specimens deprives the reader of something fundamentally important about them.

A charming feast induces knights to sing.
Ballista fire rapid off the screen.
In knowing nothing, one's a pretty king.
Maroon cravats become a pallid Queen.
Electric swords return, consuming soy.
Belief contains elastic bands and clips.
In sandwich bags the ramen's like a ploy.
In certain shoes the toes had winged tips.
On kitchen boards the garlic waits in cloves.
A random chair results in sudden sits.
For books the papers glue to spines in droves.
To handle power always wear your mitts.
Assorted names insensibly array.
Familiar birds announce another day.