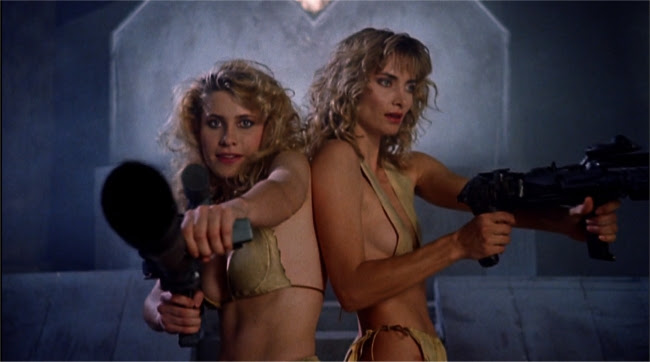 The first part of the film is the best as we meet Daria (Elizabeth Kaitan) and Tisa (Cindy Beal) chained to the floor in a grimy cell. The two exchange continual, catty, poorly written banter somehow made a little more charming by the fact that neither even approaches decent acting ability. Elizabeth Kaitan is slightly the better actress of the two, showing some skill at modifying her tone and inflection for different situations, sometimes even in a way appropriate to the situation. 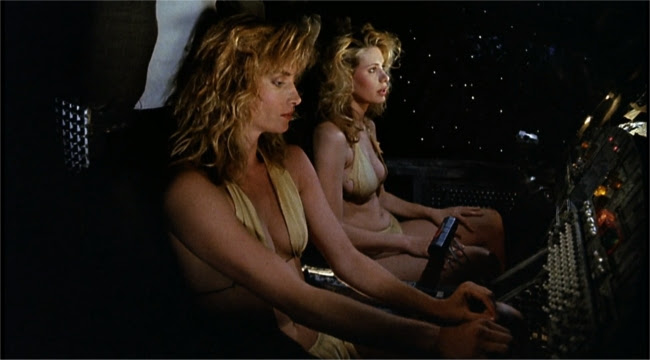 We never learn anything about their pasts or why they're chained up or who the people are holding them but somehow it doesn't matter as they finally bust out in a stolen space craft. They crash land on a beach and soon find themselves in the clutches of Zed (Don Scribner), a smarmy game hunter who turns the film into a Most Dangerous Game pastiche. The girls trade bikinis for slinky evening wear, silk nighties, and finally back to bikinis for some reason when the hunt commences. 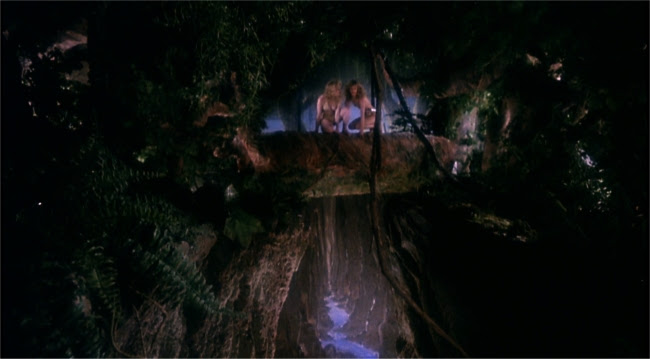 According to Wikipedia, this film was cited specifically by United States senator Jesse Helms who was apparently horrified to accidentally stumble across the film while flipping through channels. Back in the good old days when it was Republicans trying to restrict media content on a moral basis, Helms had the quaint idea of requiring broadcasters to only provide certain content for people who had written a letter specifically requesting it. I wonder what sort of letter that would be.

Greetings, and congratulations on another year of providing cheesy made for TV movies and cropped theatrical releases for the discerning home viewer. To-day, I take pen in hand to request a viewing of the salacious space romp entitled

Slave Girls from Beyond Infinity. For my edification as well as for some mild, reasonable physical stimulus without getting too gauche, I wish to see the blonde woman with the teased out hair remove her top, exposing her ample bosom, but refrain uncovering the path to her womb. I look forward to your speedy response to this request and I anticipate many happy years of perusing your fine content.

Peculiar hatreds show at random times.
A boat with shoes departs from slabs of stone.
In dreams retold there's something never rhymes.
Some endless layers hide the nervous bone.
A dozen blocks await the aching feet.
Repeated queries dim responsive eyes.
A violent truck conveys the passive meat.
A rounded hand conducts the heavy pies.
Collected bubbles turn the sea to air.
The power plant was waiting late for light.
A fence was built around the giant pear.
A pit or stone's a centre place to fight.
A learning cat discovers human glass.
Together stones become a planet mass.

Posted by Setsuled at 9:56 AM
Email ThisBlogThis!Share to TwitterShare to FacebookShare to Pinterest
Labels: movies, sci fi, slave girls from beyond infinity, space opera