The Doctor Beat Goes On 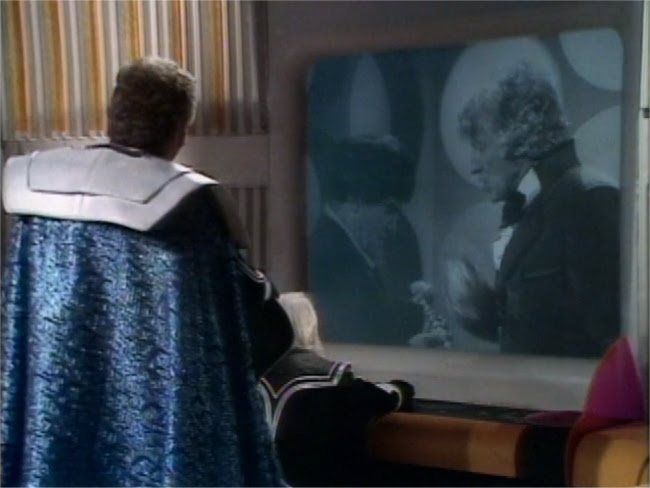 Well, it's been over a week now since what many are calling "the end of Doctor Who". Of course it's not. I was perfectly able to watch and enjoy The Three Doctors this week, the story of one of the founding Time Lords, Omega, and his bitterness over the fact that the Time Lords have rewritten and suppressed part of his history. Sounds familiar. The story also involves the First, Second, and Third Doctors, since it is an anniversary episode, the ten year anniversary, from 1973. The Time Lords also refer to William Hartnell as "the earliest Doctor" in the episode, too, though maybe these Time Lords are simply not among those in the know regarding the Doctor's great secret past.

It occurs to me that everyone angry over the idea that Rey in Star Wars had to have a lineage of Jedi behind her should probably also be angry that the Doctor couldn't simply be an average Time Lord but had to be the foundation of the Time Lords as a species or caste. I suppose it's not considered the same thing, though, because suggesting people inherit personality traits is more politically dangerous than suggesting someone might regenerate into another person with similar personality traits.

"The Timeless Children" is a bad episode though I feel many of the criticisms I hear of it don't quite get at the heart of what's truly lame about it. Sure, it screws up the canon but the show has done that before, many times. The visions of earlier incarnations for the Doctor in Brain of Morbius seem to contradict previous references to Hartnell as the first incarnation, as do the chattering voices of the Third Doctor's subconscious in The Time Monster. Of course, the idea that Doctor Ruth comes before William Hartnell still doesn't make sense of the fact that her TARDIS looks like a police box--Hartnell very clearly indicates it gets stuck in that form for the first time in the 1963 premiere. But Chibnall or another writer could say the Doctor subconsciously sabotaged it to keep a favoured form from earlier. There are a million possible explanations, none of which would probably be satisfying because it would feel like the show covering its ass. It was obviously simply an oversight by Chibnall.

The bigger problem is that the actress playing Doctor Ruth is just so boring she takes some of the magic out of it. In that sense, it is a bit more like the backstory for Rey suggested by Last Jedi--Rey's parents could have been nobodies, the Doctor's previous incarnations could have been wholly unremarkable. But who wants a story about someone unremarkable? Even Bartleby the Scrivener was interesting in the end.

Jodie Whittaker wasn't very exciting in that finale, either. It seems like she spent 90% of the episode speechless and slack jawed. Can you imagine Tom Baker spending forty minutes that way? Or David Tennant? Why couldn't Chibnall put as much life into the Doctor as he did the Master? Why wasn't Yaz as goofy as Ryan and Graham? Maybe Chibnall is very careful about how he writes women. Ryan and Graham are reportedly leaving in the Christmas special so maybe this will give Yaz a chance to become more well-rounded. Somehow I doubt it. Considering "Timeless Children" had the lowest ratings of any finale in the series' history, classic and revived eras included, maybe Chibnall won't get a chance. Jodie Whittaker has said she's leaving if Chibnall's ousted. I wonder if the next actor or actress will have to lie face down on the floor with a blonde wig in the regeneration scene.

Posted by Setsuled at 12:40 PM
Email ThisBlogThis!Share to TwitterShare to FacebookShare to Pinterest
Labels: doctor who, television, tv show