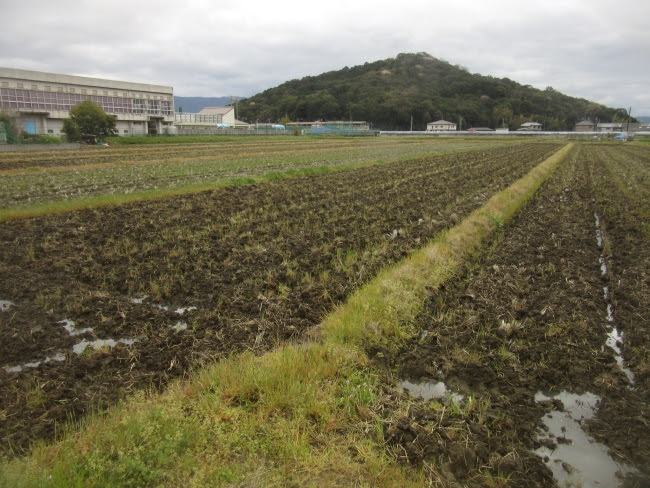 There are so many rice fields here it's amazing. Between schools, apartment buildings, shopping centres, parks--if there's a free spot, there seems to be a rice field. Lots of gardens, too, with food crops. Yesterday I passed some very tasty looking daikons.

I do avoid going out but yesterday I needed to go to my future apartment building and to-day I had to get a phone. I only recently bought a smart phone when I was in El Paso last week, the first I've ever owned, but even though I paid it off, apparently Verizon won't unlock it for sixty days. Their service also won't take calls from overseas or let me log onto the website to cancel service, supposedly for security reasons but more likely so people can't stop them from sucking out money they're not earning.

So I had to get another phone for a Japanese phone service and I managed to get an iPhone 5 for 5,500 yen (around 50 dollars). I hope that's a good deal. I got it at a shop called Hard Off that sells all kinds of used electronics, furniture, clothing, and luggage. I suspect I'll be going back there. It's fitting since, before leaving the U.S., I sold most of my books, DVDs, and CDs at Book Off, another store owned by the same company.

I was walking through a lot of areas where I saw only one or two people. There's no lockdown here but I don't know how much the scarcity of people was due to self-quarantining. I've seen a lot of people not wearing masks, particularly older people and working class people. One guy without a mask loading a truck even did the deliberate cough when he saw me wearing a mask. I've heard about this sarcastic reaction from working class people in the U.S., too. I can understand it. A lot of well-off liberals are as quick to show their asses in response to right wing concerns about the economy. Few groups of people are as bad at reading the situation as rich liberals who see the economy as some abstract thing that Wall Street guys talk about on the golf course, not realising that what it actually means is the system by which blue collar folks put food on the table.

On elevator feet the monstor stopped.
Arising 'fore the stream he built a bridge.
A sugar switched, became the healthy pop.
The cans were left along the mountain ridge.
The information's shoved between the teeth.
A lasting lump distorts the floppy wig.
A team of rabbits hide amid the heath.
The lobby hands in plaster start to dig.
A stripey brain contained a line of thought.
A looser walk delayed an amble straight.
As eagles learn the lofty egrets taught.
A fortune fish in hand'll serve as bait.
The wild koi is swimming hard in place.
A morning mind presents a coffee face.

Posted by Setsuled at 11:36 PM
Email ThisBlogThis!Share to TwitterShare to FacebookShare to Pinterest
Labels: coronavirus, hard off, japan, rice