The Doctor Without a Secret

So it seems, when it came to the finale, the people behind Doctor Who this season had nothing. They set up a bunch of dangling threads and tossed them into the wind.

What a mess. Where to begin? The subplot in Ireland which appears to have been merely visions experienced by the Doctor (Jodie Whittaker) implanted to cover up or hint at the secret history of the Time Lords . . . How, why? The secret history of Regeneration which doesn't seem to have anything in it worth keeping a secret? Doctor Ruth not making any sense and having a pretty insubstantial presence anyway (I'm sure enough people have pointed out how her Police Box TARDIS and sonic look like cock-ups now for me to rehash it)? The Doctor escaping the Matrix by using flashbacks from the series?

So Chibnall definitely watched The Deadly Assassin but seemingly not The Three Doctors or Brain of Morbius. Or maybe the reason no mention was made of Rassilon or Omega in "The Timeless Children" was that the "official" history, the one pasted over what the Master () uncovered, is actually much worse than reality.

It is more than a little ironic that an episode about how terrible it is to ignore and rewrite history is an episode that ignores and rewrites the show's history.

I'll say something nice about the episode, though. I still think Sacha Dhawan is good as the Master, even if he's no Missy. I like the return of his shrink ray. I like how the Master saw bringing about the destruction of the universe as a sort of recompense for not being as important as the Doctor. That motive has a real sense of egomania to it. Though this is lost somewhat in the Doctor's big speech about how it's fear that caused the Master to think the secret history is so horrible. It's true, anyone thinking it's horrible, particularly the Doctor, that she'd actually had several lives before William Hartnell doesn't make sense. It's understandable being angry about having one's memory erased without their consent, sure, but not that they had a bunch more lives. It seemed more like a thinly veiled attack on fans who would have any problem with it, essentially saying, "If you hate this, you're racist."

The episode spared a moment for Ryan (Tosin Cole) to look like an idiot and for Yaz (Mandip Gil) to get some unearned validation from Graham (Bradley Walsh) which descended into an awkward joke about Yaz being from Yorkshire.

The episode ends with the Judoon somehow easily entering the TARDIS and taking the Doctor prisoner. Because why not? It's not like the show has to follow any kind of canon. 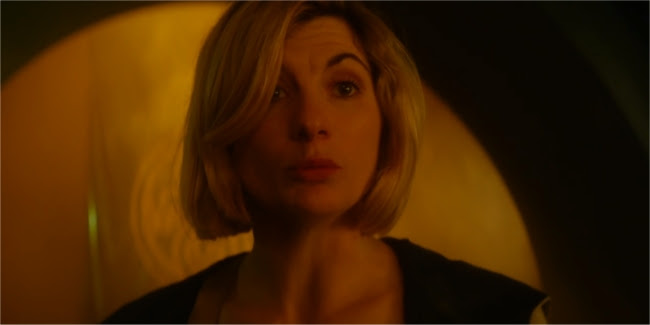 So, in two seasons, the Thirteenth Doctor has managed a more precipitous drop in ratings than the Twelfth Doctor in three seasons. You have to search carefully to find positive comments about it on the internet. Its Rotten Tomatoes user rating is under 20%. Just how far is the BBC willing to go with this bullshit before they finally put the show back in the hands of a good auteur? Are they really going to play chicken with a slow, boring death next season? Time will tell, it always does.