Four Faces in the Devil's Drama 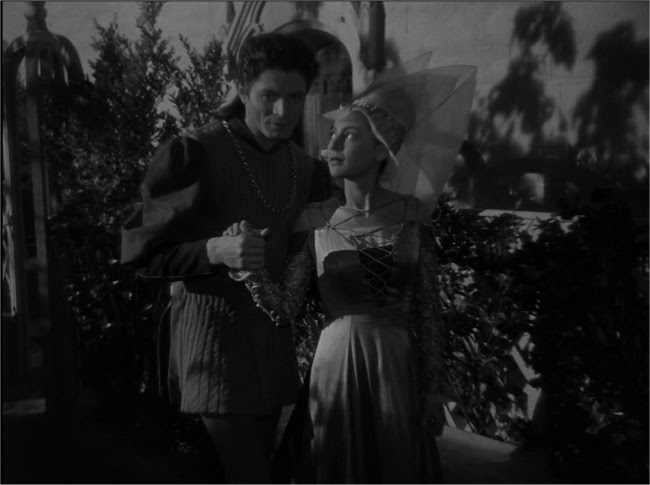 Sometimes a movie is carried so beautifully by the charisma of its stars. 1942's Les Visiteurs du Soir (The Devil's Envoys) has lovely cinematography and a fascinating screenplay but its magnificence resides in its inimitable four leads, Alain Cuny, Arletty, Jules Berry, and Marie Dea. The story of two servants of Satan and their entanglement with mortal affairs needs very little in the way of special effects when it has faces like these. 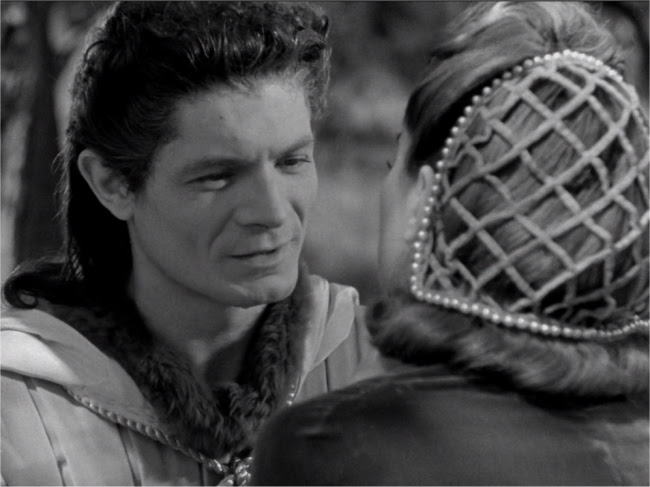 I'd only seen Alain Cuny when he was older, like in Dolce Vita and Emmanuelle. In 1942 he looked just like one of Tolkien's elves. With him is the beauty from Children of Paradise, Arletty, here being perfectly cruel, exhibiting deliciously subtle, sadistic amusement. 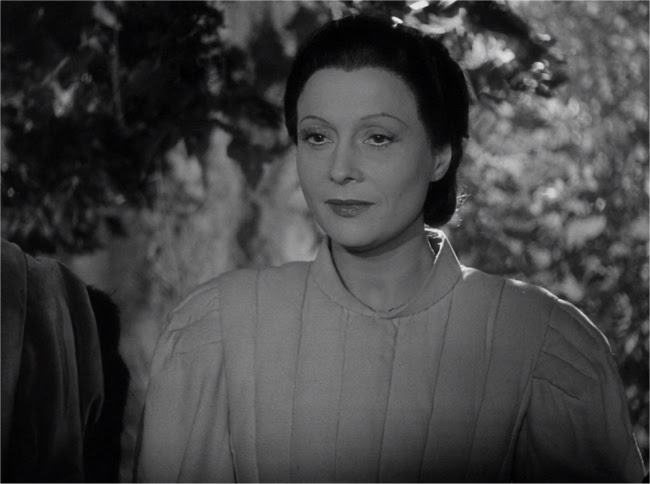 His name is Gilles and her name is Dominque and they disguise themselves as minstrels to wreak havoc via seduction. They come to a peculiar white castle where a Baron (Fernand Ledoux) is holding an enormous banquet. Everyone laughs hysterically when three hideously deformed dwarves are unmasked. 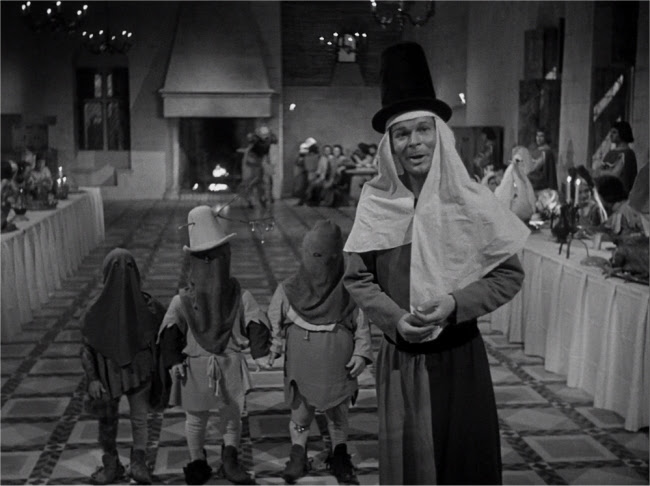 It's perhaps for this cruelty the people here have become Satan's prey. But there's an exception--the beautiful Anne (Dea) recoils in pity and horror from the dwarves. The dwarves, by the way, turn out to be servants of Satan too and they deliver messages to Dominique and Gilles. There's a wonderful, understated logic of fairy tale to the movie and I particularly like how it's used to reveal or reflect the way characters are thinking. When the Devil (Jules Berry) arrives and taunts Anne in her bedroom, she doesn't believe he is who he says. Then he shows her he can be two places at once--talking to her in her room and also in the nearby garden, sewing seeds of violence between two noblemen. 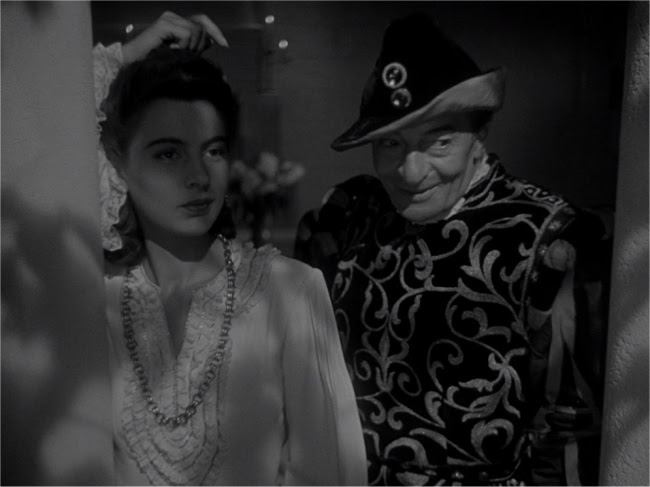 Without missing a beat, she tells him this isn't so wonderful because she's in two places at once, too--trapped in her room and, in her mind, at the fountain with her love, Gilles.

The movie comes back a lot to the idea of free will, that "the mind is its own place", as Milton's Satan put it. Gilles, as a servant of Satan, still randomly decides to do a good deed at the beginning of the film. Both he and Dominique do what they do because they choose to and they can stop any time. Satan can threaten and coerce but he can't really force people, in their hearts, to think or feel a certain way. It's no wonder many saw the film as an allegory for the Nazi occupation of France, though the director, Marcel Carne, denied it. Certainly Jules Berry as the Devil is much more charming than Hitler ever was. 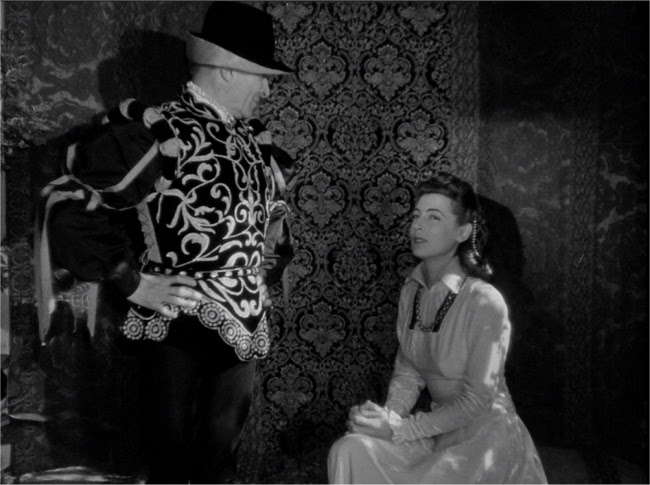 But of the four leads, I have to give top marks to Marie Dea. When she looks at Gilles at the beginning, I've never seen such an intensity of passion in a relatively still face. A screenshot can't communicate it, you have to see the subtle motion of her breath and her eyelids. Something about the proportion of her nose and her beautiful big eyes suggest a girl whose heart is right there on the surface. 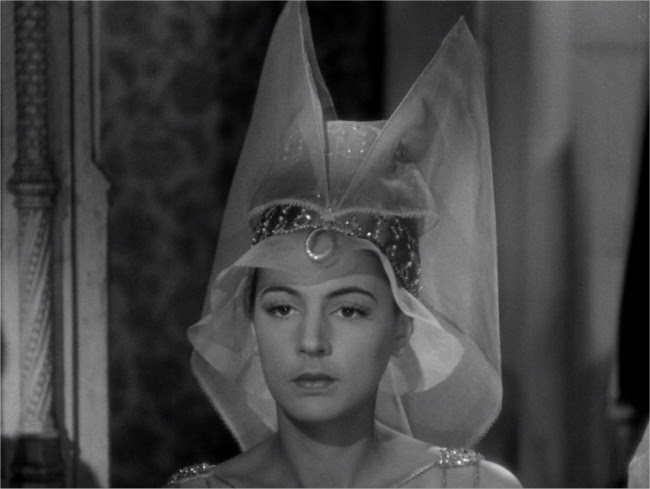 Les Visiteurs du Soir is available on The Criterion Channel.