I ended up downloading and watching Gunga Din yesterday. What a great movie. Well, mostly great. It could've used more Cary Grant and a lot more Joan Fontaine, but I do like Victor McLaglen and Douglas Fairbanks Jr. I was amazed at how much Indiana Jones and the Temple of Doom owes to the movie.

I think I may try and catch a showing of Wall-E to-day and finish colouring Chapter 3 of my comic. I'm really looking forward to working on Chapter 4.

The Code Geass to-day was one of the sillier episodes, but silly intentionally, at least. It's really amazing this show's any good. As I was said to Tim on Friday, at times it's like a screwball comedy about a conflict between Sunnis and Shiites.

Last night was a little clothes shopping in Second Life, and half a game of chess. A complete stranger offered to bite Toubanua's neck at one point. Tou looked like this at the time; 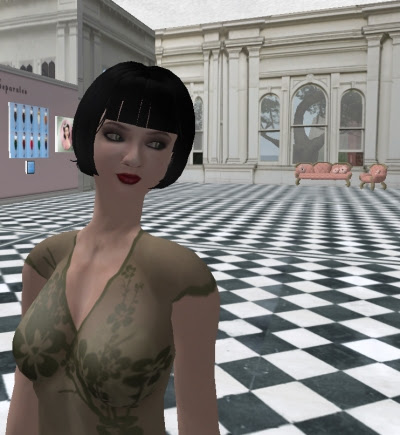 So I can see why someone might think she was game. But I think we all know what biting leads to.

It seems like there's an invisible presence behind Tou in the picture, doesn't it? I've decided it's Fred Astaire.

I bought a gingham top for Tou last night and I've been hungry for pizza ever since . . .
Posted by Setsuled at 3:05 PM
Email ThisBlogThis!Share to TwitterShare to FacebookShare to Pinterest