I had time a couple days ago to watch the first Rebuild of Evangelion movie (which I talked about in this entry, in case you missed it). And wow, what a difference. The story's much tighter--everything that was trimmed was genuinely excess, and several of the characters, most notably Misato, come across much better. The series Misato, particularly early in the series, would shift between a bouncy cartoon lady to a woman with depths of psychological damage. This movie makes those two aspects of her personality seem more of piece. One particularly interesting scene, where Shinji spends some time wandering about the city, has been altered so that when he comes home, his remarks to Misato are slightly more insolent. Instead of hitting him as she did in series, he makes a remark that seems to effectively expose a piece of self-loathing in her, and when he leaves the room, she hits herself instead. It was a marvellously effective moment that did lot for establishing her character.

The music's been changed in places, too, but almost always it's an improvement. Shiro Sagisu wrote new music for a scene in the first episode where Shinji speaks to his father that had previously featured a tune that had awkwardly resembled "God Save the Queen". The only real complaint I have about this new movie is that some of the music features choir singing in English, extremely silly and simplistic lyrics that I'm sure must sound exotic and interesting to Japanese ears. But then, I wouldn't have been able to make out the words if the fansubbers hadn't thought to include subtitles for them.

Otherwise, You are (Not) Alone is an improvement on the first six episodes of the series in almost every way. The relationship between Shinji and Rei has a great deal more nuance, and there's something almost inexplicably tender about Rei now with a slightly different performance by the always brilliant Megumi Hayashibara (who was also Rei's original voice actress). I think some people might miss her almost blank slate quality early in the series, but I definitely think this is an improvement and does a lot for good continuity with Rei as she behaves later in the series. As with so many of the characters, it seems as though this new movie is filling spots in characterisation that had been left empty before because the creators hadn't yet learned the personalities of these people.

The sound is vastly improved and is of the same rather breathtaking quality as the beautifully inventive sound effects of Top o Nerae 2, another Gainax production. But more than anything, You are (Not) Alone is an improvement for the quality of its visuals. Colour is vastly superior, backgrounds are lush and Tokyo-3 feels much more like a city. The Evas and Angels feel much, much larger--as in, more like the size they're supposed to be--for subtle things like lighting them better at the bottom in night scenes and leaving their tops almost completely dark.

Here's a particularly good example of the improvements. This is from a scene originally part of episode 3 that had featured really awful, artificial blue shadows on the characters' features (original episode on top, movie on bottom); 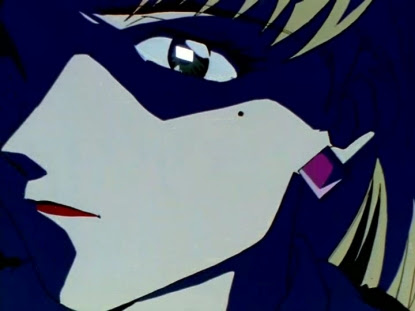 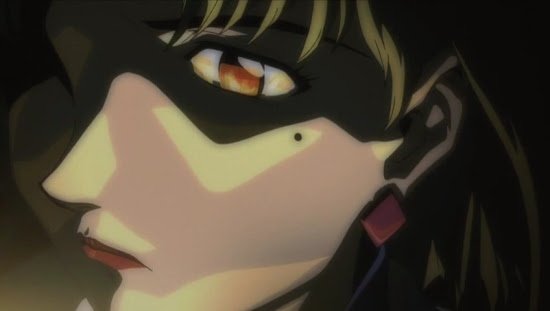 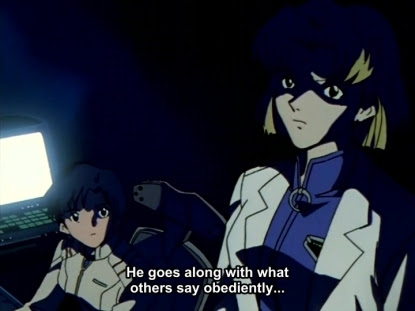 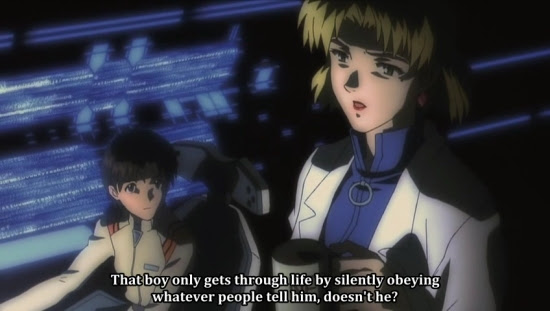 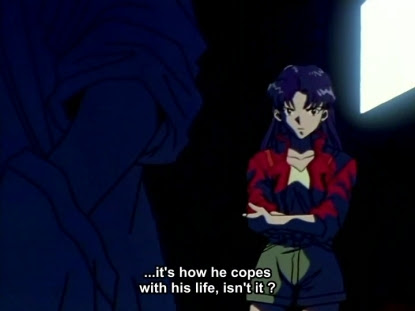 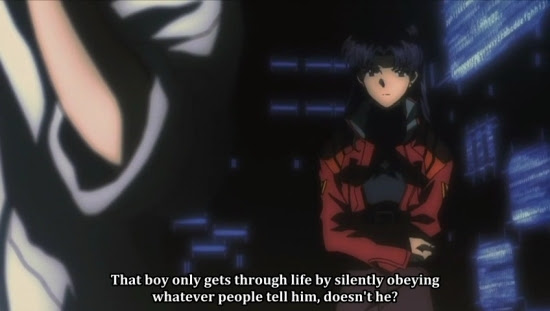 And as you can see, it's not just new colouring. They're new, better, drawings of virtually the same things. I can't wait for the next movie to come out.

I'd better get to work now. Yesterday I wrote the script for chapter 2 and worked some more on the web site design. To-day I shall do rough sketches of chapter 2's pages and do more web site design. I already spent time converting the history into html while eating breakfast. It's gotten so I think about how I can make every part of my day useful . . .
Posted by Setsuled at 8:41 PM
Email ThisBlogThis!Share to TwitterShare to FacebookShare to Pinterest