One covers large distances in Second Life by teleporting. There's a "home" location one can set to which one may teleport at any time by clicking "teleport home". But last night, doing this put Toubanua in some defaultish area where other avatars were rapidly appearing next to her, some exclaiming, "This isn't my home!"

More and more people appeared and no one could teleport out. "I guess we're stuck here!" someone said. "If someone's killed," I said, "we'll all start pointing fingers and have a murder mystery!"

Someone else pointed out a little later that 8% of everyone currently in Second Life had now teleported in. Some of us were trying to get away, but progress was dreadfully slow. Toubanua was floating away like an escaped parade balloon. I think everyone got a nice view of her underwear as she was wearing this outfit; 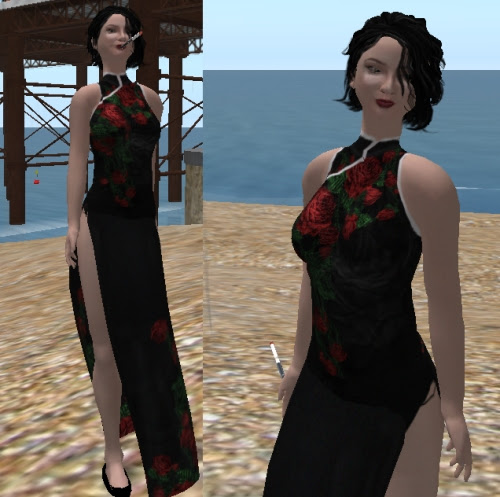 Just another incredibly cheap, amazingly well made outfit from Bare Rose that also came in two variations. I'm more excited about the hair, which I got before I knew how to adjust clothes and other things on avatars and just remembered to work with it last night.

I'm out of oatmeal this morning. I'm making do with strawberries. At least the coffee pot's agreeable to-day.

Pieces fall inevitably and she
Expected them, of course, she had a plan
Immediately in force that would be
Devious and pretty, making a man
From silly stones dropping in lines, but holes
Appeared between bulwarks, of course, but this
Meant greater gain when the right piece will close
The gap, though more gaps appear and a wish
Becomes a dumbly crooked stack, wicker
Now taken for man, torch fire for love
As she's saved from life at the bottom tier
And the stuff good lines are really made of
Shapes once elegant are now a jumble
And timidity sours to treacle
Posted by Setsuled at 3:18 PM
Email ThisBlogThis!Share to TwitterShare to FacebookShare to Pinterest