Kind of a domino effect of problems to-day. First I thought I'd download some Rolling Stones to listen to while I worked, but the torrent site my search took me to put a virus of some kind on my computer that immediately took me to the Blue Screen of Death--or so I thought. After several restarts, installations and complete scans of two antivirus programmes, none of which affected the thing, which would still randomly reappear, I discovered that it was in fact a screensaver made to look like the Blue Screen of Death followed by a 620x480 Windows XP startup screen. It had, the first time, managed to adjust my screen resolution to 620x480 as well as change the wallpaper to empty blue with an alarmed yellow box in the middle telling me I had a horrible virus. But after the virus scans, it was merely a screensaver.

Somehow, the ability to change the screen saver seems to have been removed from Display Settings, maybe a side effect of the virus or maybe it'd never been there--I'd never cared about the screen saver before. I eventually installed a very default looking XP screen saver from the Microsoft web site that came in an exe file that automatically installed it. I would have preferred a good Sayonara Zetsubo Sensei screen saver to go with my wallpaper--this one; 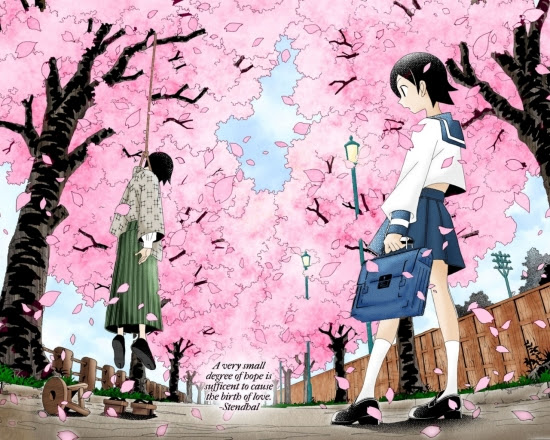 Normally I don't like quotes on my wallpaper, but that one was used in the series and I love the juxtaposition. It's useful, I think, to be reminded that a little hope, like love, can be a painful thing.

I read yesterday that there were more than 33,000 suicides in Japan in 2007, which is average for Japan. I was reminded of a quote from The Bell Jar; "They understood things of the spirit in Japan. They disembowelled themselves when anything went wrong."

David Sedaris mentioned on The Daily Show a couple weeks ago how everything was cute in Japan, and I suppose some might wonder how that can coexist with a high suicide rate. It seems perfectly natural to me; so much of the popular art in Japan seems designed to combat despair. It seems natural that the vast majority of art and decoration should be a little ham-handed and therefore probably a bit counterproductive.

There's ridiculous, enormous pressure on success in Japan, too. The manga Maison Ikkoku shows a college student, Godai, desperately trying to get through college in order to gain the slimmest of hopes of being hired for a decent job. He and Kyoko can't even acknowledge their affections for each other until Godai somehow maybe succeeds professionally and neither of them seem to fully understand the reason behind their own behaviours. The manga somewhat idealised the situation, and we never for a moment really think Godai will fail, but it's clear to see what would happen if he did; Kyoko would never acknowledge her affection for him, spared embarrassment by society's ingrained defence mechanism, and Godai would either kill himself or get lucky finding a far more humble line of work. I was disappointed when the anime version defused this tension a bit.

Yesterday I watched more xxxHolic, having downloaded first season episodes finally, and I'm enjoying it more and more. To-day I watched some Slayers because I had a dream about it last night and the first episode of a Magical Girl series called Princess Tutu, which is very nice, but you can clearly see the tense battle with despair here, too; ostensibly for children, the show's suggestive crotch shots and typical nude transformation scene have a vaguely paedophiliac quality, reminding one of the relationship between otaku and paedophiles. I'm not sure if this is an attempt to deal with the psychological need by confronting it, or exploiting it innocently. Either way, it seems strange in light of the fact that Princess Tutu is actually very good, with good characterisations and nice fantasy elements.

Waiting for one of the virus scans to complete, I decided to walk to the grocery store in order to save money on gas. Of course, to-day it would happen to be 104 degrees Fahrenheit outside. It's starting to feel a lot like Comic-Con--the time of year when more than a hundred thousand people in costumes shall need to wait outside for long periods in 100 degree weather. I don't mean to suggest all otaku are paedophiles; I won't be in costume, but I'm certainly a sort of American otaku myself.
Posted by Setsuled at 9:39 PM
Email ThisBlogThis!Share to TwitterShare to FacebookShare to Pinterest