So I guess Barack Obama's going to be president. Sounds good to me, except I still feel like I don't know much about the guy. Or maybe it's just that I don't know anything strictly bad about him, which is pretty damn strange for a prominent political figure. I even like his wife; she seems more relaxed and organic than any other first lady lifeform in recent memory.

This is the actual picture Huffington Post is using for the story; 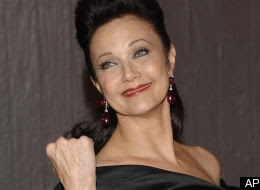 "Ms. Carter! Ms. Carter! Can we have a comment about the body you found in the river?"

"Oh, Darling, it was just one of those things, tra la!"

"Do you have any plans now with respect to this development?"

"Now, now!" Chuckles, flashbulbs. "But really, I'm just going to curl up by the fire with some chocolates, my schnauzer, Scratchers, and a good book. Farewell!"

And this is the other photo Huffington Post is using for the story;

Er. Score?
Posted by Setsuled at 6:41 PM
Email ThisBlogThis!Share to TwitterShare to FacebookShare to Pinterest