Bad paint looks normal on dented plastic.
Grey continents in a sea of black glaze.
Air is the baby in mankind's basket.
Going now into a dull opaque phase.

Ugh. I slept badly yesterday because I tried eating some spaghetti with vodka sauce and I ended up feeling bloated as a days old corpse. I googled a bit and found a bunch of sites that told me, "You're in the first stages of pregnancy!" I was so tired, a part of me seriously started to contemplate that possibility.

So I'd started my next chapter a day early so I'd have Friday and Saturday to unwind after my mind and spirit being in a pickle jar for about a week. I went to Tim's last night, and a few hours in, while I was trying to enjoy Oblivion through the haze of sleep deprivation, Tim's doorbell rang and I met outside a teenager who'd just backed his obnoxiously large truck into my car. 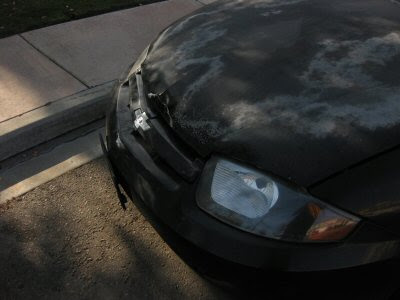 The little Chevrolet symbol's broken, too. The corroded paint job was already there--I've been putting off getting it repainted.

I felt like I was barely present while we exchanged insurance information and he tried to convince me to let him fix my car himself at the local high school. I felt bad for him, I know insurance is expensive for teenagers and this was likely going to hurt. But I ended up calling my insurance when I woke up to-day. I still have a bad feeling I'm just going to be stuck with this somehow.

This is the second time a car's hit mine when it was parked outside Tim's. Last time, the car wasn't drivable. At least I can still get around this time.

Of course, I once again missed a full day's sleep, as I always have a hard time getting to sleep when I have to get up early, in this case to get photos of my car and make phone calls. I kept getting up to pee, I think, psyching myself into thinking the urinary tract infection was back. I propped up a bunch of pillows to try to sleep like Joseph Merrick because my stomach actually felt a bit better like that. It actually kind of worked for a while.

But, please, Oden, Belldandy, Apollo, whoever's listening. Let me have to-night off. Please.
Posted by Setsuled at 6:52 PM
Email ThisBlogThis!Share to TwitterShare to FacebookShare to Pinterest