I guess yesterday wasn't so bad. Tim finally got Oblivion running properly, and I watched part of a new copy of The Godfather I got last week. It's the new "Coppola Restoration"--I didn't finish watching it because the headache I'd gotten from all the sleep deprivation was preventing me from really enjoying it, especially since it's one of those movies that I've watched so many times I feel as though I've sucked it dry. In high school, it was one of those dependable things I could always put into the VCR and expect a nice time. But the picture on this new edition is hugely better than the previous DVD release. I noticed again how curiously high contrast a lot of the photography looks, especially in the wedding scene and the exteriors for Woltz' mansion. The sky's usually turned into a white void. 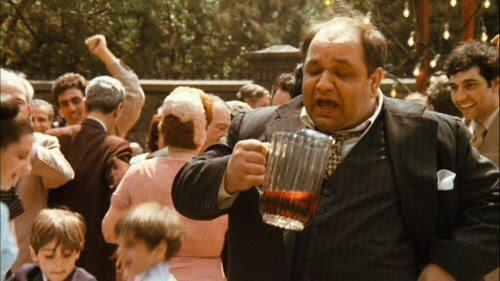 The difference between the movie blood and the real blood of the real horse's head in Woltz' bed came off very strongly for me. A lot of people don't know that's a real horse head, so I bet audiences found the scene disturbing in a way they couldn't quite explain in the original theatrical run.

"Villains", the episode of Buffy the Vampire Slayer I watched last night, put a big smile on my face. Willow torturing Warren was so fun and satisfying--the show just completely fails to make any argument as to why Willow shouldn't kill him, so it ends up having some of the glee of a Tarantino or grindhouse revenge film.

I also played a bit of World of Warcraft, playing some really annoying quest in Western Plaguelands that had me trying to find a specific book among a bunch of "musty tomes" that summoned a pair of difficult ghouls whenever I picked up the wrong one, who usually managed to kill me whenever my Retaliate ability was in its five minute cool down. They kept putting some kind of curse on me that reduced my strength and stamina by 100.

My headache was pretty amazing last night. I had some Alka-Seltzers, but I might as well have just been drinking water for all the effect it had on me. It wasn't a migraine or anything, it was just constant and reduced my ability to engage with the world by about 100, I guess much like the ghouls. I really was getting mixed up last night--when my undead warrior sat down to eat some bananas or corpses to regain health, part of me really did think, "Maybe this'll help my headache."

What did eventually help was going to bed. It was extraordinary--my headache instantly disappeared when my head hit the pillow. When I sat up, it came back, and went away again when I lay back down. It was like a light switch.

But to-day's one of those lately rare days when I actually feel like myself, which is very good because I'm drawing the 300th page of Venia's Travels to-day. I made a commitment to myself to do this comic for around two years, and I do feel like it's around three fifths done. I'm excited.
Posted by Setsuled at 6:59 PM
Email ThisBlogThis!Share to TwitterShare to FacebookShare to Pinterest