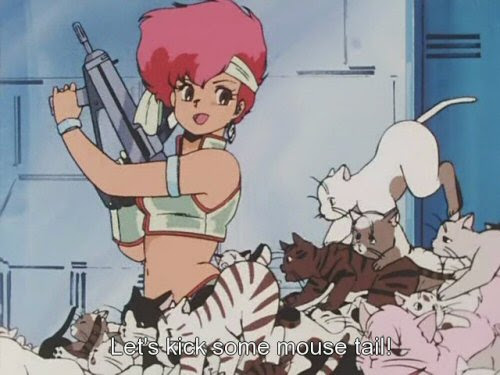 I feel like myself to-day for the first time in a week. I had a cup of coffee with breakfast, the first caffeine I'd had in three days. I feel like I almost kicked my caffeine addiction, but my head still had this weird triangular feeling, like there was a big empty compartment on the top with two lower compartments filled with condensed brains. I had a rice and bean burrito for lunch that seemed to help--on a diet of oatmeal, cous cous, and bread, I don't think I'd had much protein for days.

Let's see, how can I relate to-day's entry to cats? Someone in Russia finally finished subtitling in English the high quality videos of the original, 1985 Dirty Pair television series, and I watched the twelfth episode to-day, about a government manufactured, super intelligent security mouse gone rogue. Kei and Yuri briefly enlist the aid of an army of cats, who prove to be no match.

I also got some footage of Snow last night walking away from me. Nothing I can really post, though. He's just so anxious nowadays whenever he drops by, coming to the door for attention, then pacing indecisively before leaving.

I've been reading more War and Peace. Rostov, the young soldier, has come home to Moscow to find Sonya, his childhood crush, waiting for him. Only now he doesn't have time for her because he's too busy socialising with older society, who accept him now that he's seen action. Poor Sonya, this after Rostov basically told her through his sister that he still liked her.

She was very pretty, charming, and evidently deeply in love with him, but he was at that stage of youth when there seems so much to do that there is no time for that sort of thing, and when a young man dreads being bound and prizes his freedom, which he needs for so many other things.

I can kind of remember thinking that way when I was in high school. Now I think back with some regret about girls who were interested in me.

Last night's caterpillar in my bathroom;

You cannot touch the Baker's tomatoes.
The bad vision has stark hue gradients.
Madness expels the cheese from burritos.
Zip codes are unwise droid ingredients.
Posted by Setsuled at 8:53 PM
Email ThisBlogThis!Share to TwitterShare to FacebookShare to Pinterest