It's weird how time seems to get away from me even faster now that the clocks tell me I have an extra hour. Maybe it's because I can't set one of the clocks in my room--the VCR clock can only be set by a remote control in which I have found what appear to be two exploded double A batteries.

To-day I dreamt Laura Palmer and Aquaman were imprisoned on a converted cruise liner in the future. One night, they manage to escape by diving together into the ocean. Aquaman helps Laura Palmer breathe in the depths with glowing purple breath flowing from his mouth to hers. The two start to have a really nice time, and I dreamed slow moving, shadowy imagery of the two swimming nude thousands of leagues below the surface. Then some device strapped to Aquaman's chest prevented Palmer from breathing, and I woke up when the two were in a mad rush for the distant surface. I suppose the bends would've killed her first, but I think Aquaman's magic was still protecting her from that.

With breakfast, I watched the online only, thirteenth episode of Bakemonogatari. After the big resolution with Senjogahara, it looks like they're concentrating on subplots, now a continuation of Hanekawa's problem with getting possessed by a cat demon. It seems to possess the very straight laced girl whenever she loses a grip, in this case it apparently might be due to some jealousy she feels for Araragi's relationship with Senjogahara. I don't know why, but somehow I find her to be one of the best looking cat girls I've seen in anime; 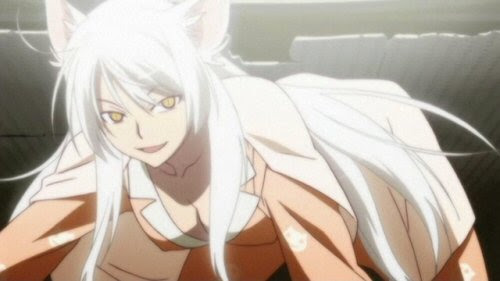 I was reminded a bit of the episode of Buffy the Vampire Slayer I watched last night, "Entropy", which seemed to continue the season long theme of retribution nicely. I'm in trouble--I find I'm actually mostly enjoying the notorious sixth season.

In life there are infinite sandwiches.
Delivery schedule's always changing.
New plan from a hen randomly hatches.
While the provolone continues aging.
Posted by Setsuled at 7:37 PM
Email ThisBlogThis!Share to TwitterShare to FacebookShare to Pinterest