Sinking or Swimming in Colour

I would so play this game;

One of the things I liked about Daggerfall*, the predecessor of Morrowind and Oblivion, was that it was actually feasible to be just a boring merchant, getting by buying and trading. Of course, I never actually wanted to play the game that way but it was nice somehow to know I could. And I've always been a proponent of having to handle basic needs like food or sleep in RPGs. It seems we're getting further and further from that.

I watched Tim play the new BioWare game, Dragon Age: Origins last week. It seems to have blended a lot of the best qualities of Baldur's Gate and Knights of the Old Republic, with convenient party options, interesting spells, and dialogue that reacts to a lot of user customisations of character. But, once again, the dialogue is so awful it gave me douche chills. I heard poor Claudia Black, a talented actress, deliver the line, "Chaos is nature's fundamental nature." I can't speak to the overall plot, but Tim did mention that there's practically no explanation for the main villain's turn as traitor.

Even worse is the intensely ugly wardrobe. The haphazard attempt to makes things look medieval at least limits their colour palette somewhat as it buys into the current idea that no-one liked using dyes in the Middle Ages, but that doesn't stop Dragon Age from including ordinary bikinis, dowdy sports bras, and unflattering, physics defying halter tops. 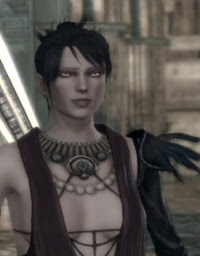 The men's clothes aren't any better, all the patterns and textures being too complicated or lacking in contrast so as to reduce everyone's outfits to variations of almost skin-tight jumpsuits, with big spiky pauldrons (shoulder pads) to indicate plate mail.

For all that, though, I do remember Baldur's Gate and Knights of the Old Republic as having stories and characters that did engage me and make me care about them. I think the format is more responsible for that than anything else, which makes me think about what an amazing game could be made if they got some decent writers.

Had trouble getting to sleep again last night, feeling like I was pregnant again. I wonder if it could be like Cronenberg's The Brood, and there are a bunch of demon children made of my repressed anger. If that's the case, apparently they hate Alka-Seltzer--I had a glass of that while watching another part of The Godfather and I very soon felt better. It may have been in part because of Michael Corleone--the guy's so cool, so collected, it's very reassuring.

I was admiring Coppola's strategic use of light and colour, going from the beautiful amber and black images of Sicily suddenly to a bright yellow and red taxi outside the muted tones of the Corleone home. Really nice.

Black liquorice should ever avail us.
My stomach is confused by an apple.
Digestion is watched by a backwards bust.
There are always marble men to grapple.


*Daggerfall can be downloaded for free now from the official Elder Scrolls website, here.
Posted by Setsuled at 7:59 PM
Email ThisBlogThis!Share to TwitterShare to FacebookShare to Pinterest