Woke up early to-day to go to the movies with my family for Thanksgiving (father's working to-morrow). We saw Blind Side, which my mother, being a big Sandra Bullock fan, was keen on seeing. It wasn't exactly a bad movie--it delivers exactly what I think most people bought their tickets to see; an "uplifting" tale of a good guy born in bad circumstances getting a break from a kind hearted woman. It's the true story of a football player named Michael Oher who was taken in by an upper middle class family when he was a teenager and, thanks to the opportunities they were able to provide for him, eventually found success in college football and the NFL.

If you dislike seeing movies that ask you to care about people with any perceivable personality defect, you love football and the particular radioactive variety of blonde hair dye seen on Fox News anchorwomen, this movie's for you. The most interesting aspect for me was that it appears to be propaganda for the idea that college football players always earn the grades they receive to get into prestigious universities. In one scene, Sandra Bullock, without the slightest bit of shame, confronts Michael's history teacher for not giving him better grades, asking him why he's not "on the programme" like the rest of the teachers. When Michael eventually does turn in an essay we see the teacher grudgingly giving a respectful grade too, it's a handwritten, single-spaced on notebook paper piece on "Charge of the Light Brigade" that features bits like, "I think this story is about . . ."

But I thought to myself, is this so wrong? Why should anyone really need a well-rounded education if they know all they want is to play football? Sure it might make him a more well-rounded person, enrich his life and make him more tolerant of others, but maybe that's a bit much to expect of humanity. I'm pretty sure that's not how the filmmakers would put it, but I'm pretty sure it's how they feel, judging from the neatly sanitised world they present, with happy, psychologically flawless white families in their huge houses contrasted with a black community concerned with drugs and ball busting 24/7. Not since Terrance Howard in Glitter have I seen a crew of such conspicuously phoney thugs, their dialogue running the gamut of ten year old, stereotypical gangsta dialect, everything from "In the house" to "bust a cap in yo ass."

Actually, what got me through the movie was imagining Michael having hardcore, rough, animalistic sex with Bullock's movie daughter, played by Lily Collins, who conspicuously refers to Michael as "bro" several times to make it absolutely crystal clear to the god fearing audience there's no possibility of hanky panky. But, man, she's so fucking hot. 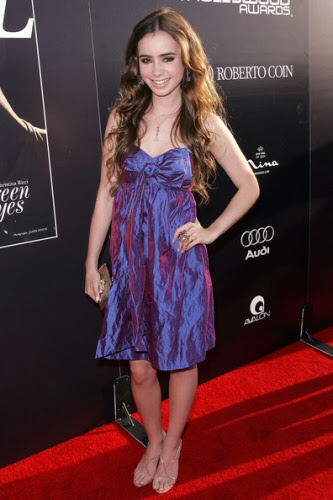 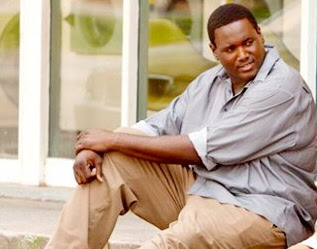 She's got those big, Audrey Hepburn eyebrows I go for. And she's half the size of the stock gentle giant character Michael Oher, played by Quinton Aaron stiffly but with a twitchy vulnerability. It's mentioned a couple times in the movie Michael scored somewhere a "98% in protective instincts," which ends up being his trump card as a defensive lineman. I had a whole scenario running in my head of her wanting to rebel against her friends and society, but not too much, so she figures Michael's a good compromise. A scene in the movie mentions how football coaches hoping to recruit Michael took him to strip joints, which only caused him to have nightmares, so I saw Collins luring him into her room when everyone else is out, coming up with some innocent game that ends in one or both of them stripped, and him being afraid of hurting her while she makes him her plaything. Then he gets flustered as he finds himself enjoying how easily he can manipulate her sweet little body. And enjoying how flushed and excited he can make her when he touches her . . .

Ah, why couldn't that have been the movie?

Melted cheese has outlived its usefulness.
Leaves spread before us like linoleum.
My friends, chlorophyll is ours to harness.
Sweeter and greener than petroleum.
Posted by Setsuled at 9:10 PM
Email ThisBlogThis!Share to TwitterShare to FacebookShare to Pinterest