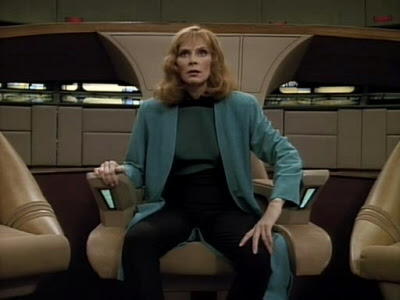 Wooden eggs think numbly of Orson Welles.
Some dry substances greatly fear water.
The melted world slug beside Kraken gels.
A fountain pen gestates the big blotter.
Warn me if you're going to CAT scan me.
They move chairs and lasers while I'm insane.
Sorry about flashing anatomy.
Somehow, hospital yoghurt is not plain.
Cashews are concrete clouds when they are raw.
Carrots and spinach are produced by elves.
There's reason for what starship sensors saw.
Dogs have determined a lot by themselves.
Perspective rules the world of each redhead.
The universe shrinks from things left unsaid.

I ended up, by coincidence, watching an episode of Star Trek: The Next Generation last night very similar to the episode of Buffy the Vampire Slayer I watched with dinner--both had to do with a character finding people in her life were inexplicably vanishing, only to discover by the end of the episode that she had subconsciously created the crisis herself.

The Star Trek episode, "Remember Me", is a fourth season episode wherein Doctor Crusher, due to a warp bubble experiment, finds people are disappearing one by one, while everyone else who remains has no memory of the people who've vanished. Eventually, Crusher's alone on the Enterprise, and planets start to disappear as the universe eventually becomes a small grey bubble surrounding the ship.

The Buffy episode. "Same Time, Same Place", deals with Willow coming back from England after "rehabbing" from being Evil only to find her friends have vanished. The reality turns out to be that she unconsciously cast a spell that made her friends invisible to her and herself invisible to her friends. As in the Star Trek episode, the spell or warp bubble was created based on the character's preoccupation at the time--in the Star Trek episode, Crusher had been with an elderly friend earlier in the episode who talked about the death of his wife and how the people in his life seemed to be disappearing, at which point he often realised how little appreciated them at the time.

The entire universe becoming smaller as friends vanished is actually a pretty nice bit of Science Fiction as poetry. I see from the Wikipedia entry that, "this episode was heavily influenced by several chapters at the end of the classic science fiction novel The Demolished Man, by Alfred Bester."

Just finished a lunch consisting of two radishes, half a cucumber, carrots, and a pile of spinach. Actually not too bad.

Thank you, to anyone who has donated so far.
Posted by Setsuled at 9:10 PM
Email ThisBlogThis!Share to TwitterShare to FacebookShare to Pinterest