Everything About War in One Easy Lesson 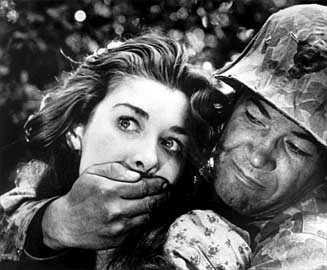 I'm back from watching Fear and Desire. And I can see why Stanley Kubrick didn't want people seeing this movie, wow. Amateurish indeed--if I'd seen it without knowing whose movie it was, I'd have said this kid has no future making movies. I guess this goes to show there's hope for everyone.

Mind you, acting as his own cinematographer here, Kubrick shows himself to be a very skilled still photographer. No wonder, considering he'd been working at it for seven years at this point. But the heavy handed characterisations loomed bigger than the pretty compositions. We can sort of see a precursor to Full Metal Jacket in the soldier who loses his mind, but this guy cracks far less believably, pretty much heading for the deep end with the starting pistol. Though one shot of him, black silhouette standing in the river, the sun at his back, is effectively creepy.

Kubrick experiments a lot with POV. Acting also as his own editor here, though, the inserted shots of soldiers punching at the camera come off as silly. And Kubrick just wasn't a very good editor technically at this point--some shots cut off weirdly in the middle of dialogue, and there are even quick flashes of deleted scenes.

The story, about soldiers from an unnamed country engaged in a war with another unnamed country, kind of reminded me of Les Carabiniers, another minimalist commentary on the nature of war. Both attempt to discuss war with their stripped down symbols, neither film really succeeding in my opinion, though Kubrick's feels more like a filmmaker biting off way more than he could chew. Characters maniacally discuss their motives of self-fulfilment and survival, too vehement too quick. There are references to The Tempest that don't quite make sense.

Certainly it's an interesting movie to the avid Kubrick viewer. Now the only Stanley Kubrick movie I haven't seen is Killer's Kiss. I'm keen to see how he went from this broad, young man's work to the subtler and more complex The Killing, though I can see some of Fear and Desire's heavy handedness in moments in The Killing like Elisha Cook falling wide eyed to the floor. But you're more willing to buy into it because Cook's relationship with his wife is so great and pulpy. All the characters are so well drawn and weird in that movie, from Sterling Hayden down to the sniper who can't open teeth for some reason. Maybe the main difference between Fear and Desire and The Killing was that Kubrick had gotten over the novelty of making a film.
Posted by Setsuled at 7:03 PM
Email ThisBlogThis!Share to TwitterShare to FacebookShare to Pinterest