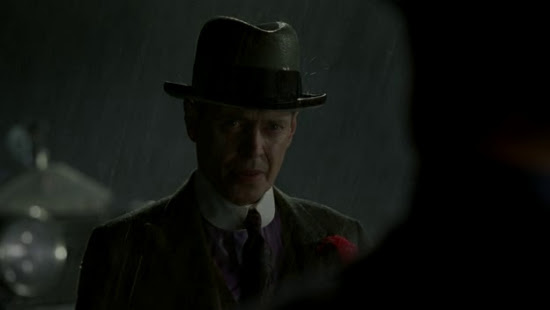 After taking a week or so to slog through the intensely boring penultimate episode, I finally watched the season and perhaps series finale of Boardwalk Empire last night. I kind of wish I hadn't wasted my time.

I think most TV shows should be written by one writer or a couple of really tight knit writers. Even the best shows are too unfocused otherwise. The best exception I can think of is the classic Doctor Who series, and then you had writers doing serials by themselves and a script editor overseeing entire seasons, and this led to more cohesion. Plus it helped that television back then wasn't addicted to Barbra Streisand moments.

Head writer Terence Winter wrote the season finale of Boardwalk Empire and he tried to tie everything together, ending Jimmy's arc showing him to be a guy who's been running from a truly fucked up personal life to finally having nowhere else to go, no war, no disinterested but sweet lesbian wife. His plea to Richard, the masked sniper, that he find a "home" somehow, that he get himself mentally away from the trenches, is a pretty good moment for both characters. Nucky ties together a bit easier as all Winter endeavours to say about him is that he's a ruthless motherfucker.

At two seasons of twelve episodes, if you looked at Boardwalk Empire as a roughly twenty-four hour movie, there's so much I would cut. I'd probably want reshoots, too. We could lose a lot of the time wasted with soap opera, who's sleeping with who?! plot business. Oof, it's so tiresome. It may not have been so bad if the writers could've gone the distance and had the characters process these things, but every episode the mad tea party moves chairs, there's a new writer in the seat with his own idea of how to write a scene of someone cheating on their spouse, or his own aspect of early twentieth century history he wants to perfunctorily establish. We could certainly lose the scenes about midget wrestling.

Maybe it's the inevitable result of so scandalous sex scenes piling up that you eventually get to an incest scene. That's the only way you can keep that party, such as it is, going. In this case, we have it in a flashback scene where Jimmy and his mother make good on the vibe between them that's been building all season. Except the flashback takes place before the series began and establishes Jimmy as being totally unable to deal with it. Michael Pitt, who plays Jimmy, delivers a completely different performance after the flashback in the present. So in that sense, the incest bit doesn't work. It also doesn't work in that his mother, played by an actress only nine years older than him, never came off even remotely like his mother.

I may watch next season, if there is one, for the actors. I hope they maybe advance the story by ten years or something, taking advantage of knowledge gained from the mistakes of these two seasons with a reboot.

On a brighter note, I read the new Sirenia Digest to-day. A good Science Fiction story that read like a very serious cross between the Futurama episodes "Godfellas" and "Parasites Lost". But with sex.
Posted by Setsuled at 1:54 PM
Email ThisBlogThis!Share to TwitterShare to FacebookShare to Pinterest