Justice Just Around the Bend 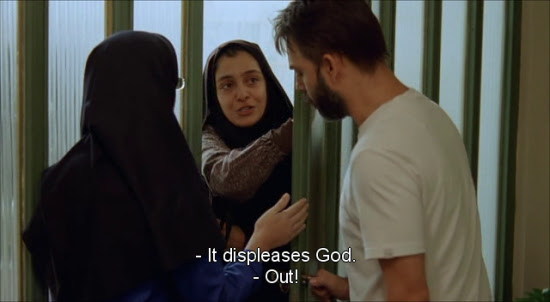 I love a story about a group of characters fighting where no-one's a hero and no-one's a villain. It seems to be really tricky to do, as more often than not someone comes out looking improbably unwise. Asghar Farhadi's A Separation pulls it off, presenting characters who almost always ring true despite being so thoroughly divided. One does wish at times that they simply listen to one another, but one wishes it in the way one wishes it about real people, not about phoney characters. Since the movie gives you reasons to invest in all the characters, it's a neat portrait of the nature of human strife.

It avoids the trite moral seesaw of a movie like the Paul Haggis Crash, where a film goes back and forth between scenes of one character being a jerk and then in another situation being good. The film primarily concerns two married couples, one middle class and apparently secular and the other poor and deeply religious. But while these factors are relevant, the nature of their disagreements isn't rested on these differences. 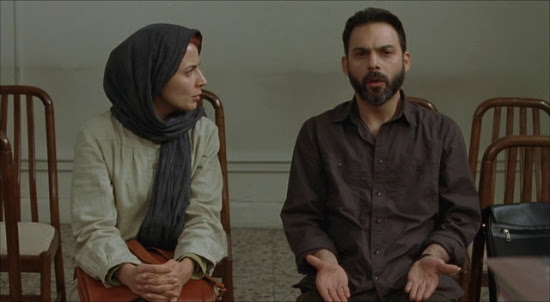 The title at first seems to refer to the divorce of Naader and Simin, the secular couple. In fact, the full Iranian title of the movie translates to Naader and Simin, a Separation. It's mainly an amicable divorce, it seems--they still like and respect each other, but Simin wants to move out of the country for her career and Naader wants to stay in Iran and take of his father who has Alzheimer's. They have a young daughter, Termeh, whom Simin does not want growing up in Iran and Termeh's forced to choose between the two parents. The main plot of the movie seems nominally unrelated, but by the end we realise it provides a demonstration to Termeh of the qualities of both her parents' characters, which serves to confirm the impossibility of the decision she needs to make. 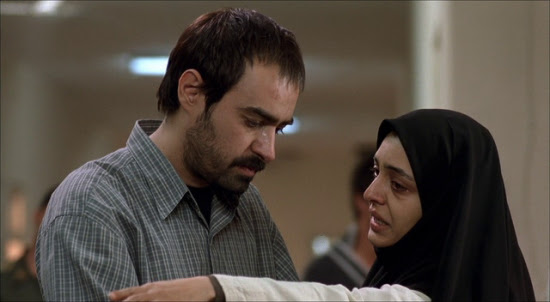 The religious couple, Houjat and Razieh, come into the other couple's lives when Naader engages Razieh to care for his father while he's out during the day. The movie shows how devout religious observance can present a number of obstacles to the impoverished--men are expected to provide for the women, but Houjat's been out of work for a long time, so Razieh accepts the job in secret. She's forbidden to touch men who aren't her husband, which presents some difficulty when Naader's father turns out to be incontinent.

The trouble starts when Razieh leaves Naader's father unattended for a little while during the day and Naader comes home to find the old man lying on the floor with his hand tied to the bed--apparently Razieh had tied him there to keep him from getting out and the man had fallen out of the bed at some point. When Naader thinks some money has gone missing, there follows a heated argument between himself and Razieh, where he's shocked by the treatment of his father and she's indignant at being accused of low behaviour and refuses to leave without being paid for the day, resulting in Naader shoving her out the door. This possibly causes her to fall down the stairs of the apartment building and miscarry. From here things get thornier and thornier

The question of where Razieh had needed to go when she left Naader's father unattended is avoided a bit too long--she's asked a couple of times before an outburst from someone else conveniently interrupts her. But her answer to the question doesn't end up resolving the argument as neatly as I feared it would. 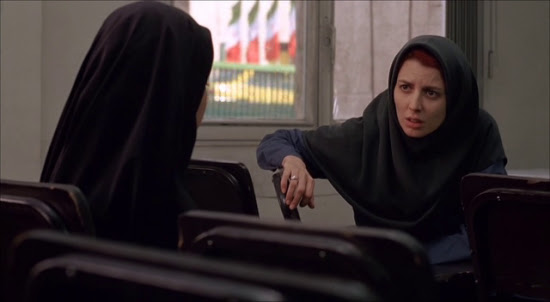 There's no cynic in this movie, everyone acts out of deeply felt principles, everyone tries to behave in a way he or she considers noble, and this is what leads to problems. Naader fights because he won't accept the idea that he's the murderer of Razieh's child, Razieh fights because she's been mistreated in so many ways, Houjat fights because he's tired of the world working against him, and Simin fights because she just wants all this madness over with. Everyone is right, so no-one wins. And that's how it goes. 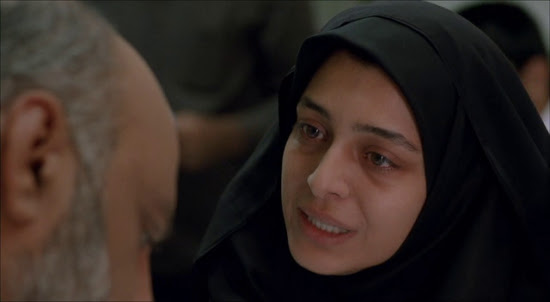