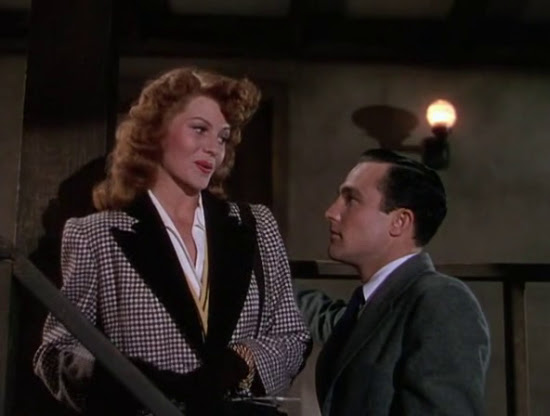 A great musical is usually distinguished by a lively and unpredictable relationship between the content and themes of the story with the music. This is the case with 1944's Cover Girl which, among other things, introduced audiences to the brilliant choreography of Gene Kelly. It's also a musical of uncommon complexity of character and is thoroughly delightful.

The setup doesn't sound remarkable to those familiar with the musicals of the 1930s--a guy and his girl (Gene Kelly and Rita Hayworth) run a small time Brooklyn night club with musical shows, Hayworth being the feature act until she wins a contest for the cover of Vanity's 50th anniversary issue and she's forced to choose between big time success and the people she loves. 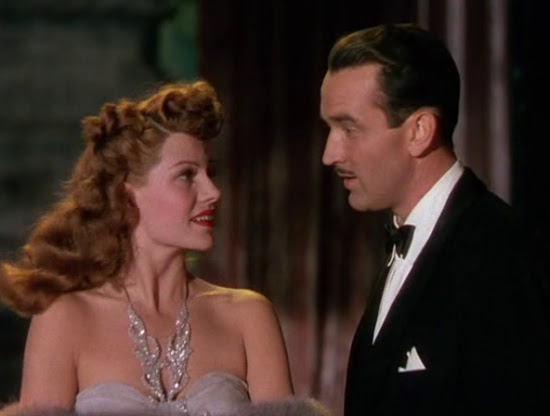 One of the nice things about this movie is that there aren't really any villains. Even some of the great musicals of the 1930s had a two dimensional villain or two. Here, the rival for Hayworth's affections, a big time Broadway producer, actually comes off as a guy with insight and sensitivity, guessing when Hayworth asks to borrow his car that she wants a last look at Brooklyn before deciding to marry him and he lets her go. The editor in chief of Vanity instigates the trouble in the story, but he's a man motivated by having lost the love of Hayworth's grandmother, also played by Hayworth in flashback, and the movie has several musical numbers with Hayworth in Edwardian attire. 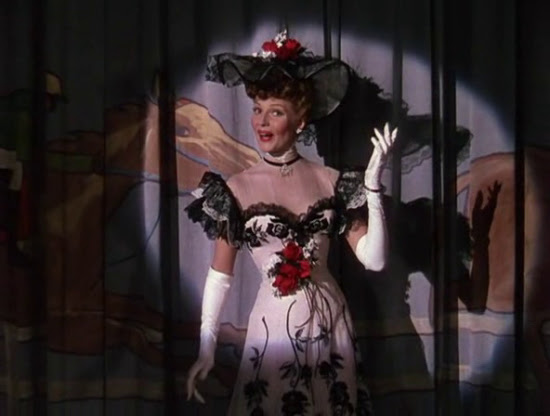 The costumes in this movie are gorgeous.

The open handedness of the film's ostensive villains helps lend depth to the film's primary theme of allowing loved ones to make their own decisions, even if it means parting. Phil Silvers is in the film as a comic performer in Kelly and Hayworth's little club and with them forms a trio of old, good friends established especially well with one of Kelly's choreographed sequences, reminiscent of the scenes Kelly would share with Debbie Reynolds and Donald O'Connor eight years later in Singin' in the Rain. 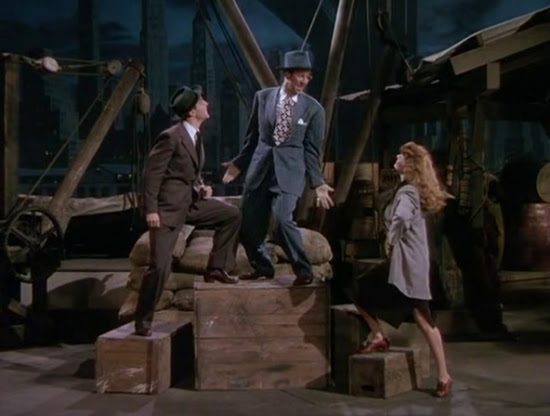 When Silvers sees Hayworth has received a telegram from Vanity, he leadingly asks her if she really wants to go that route and when she solemnly shakes her head, he tears up the telegram and throws it down the stairs. After he and Kelly are alone, though, Kelly's upset with him and asks him why he couldn't "let her tear up her own telegram." 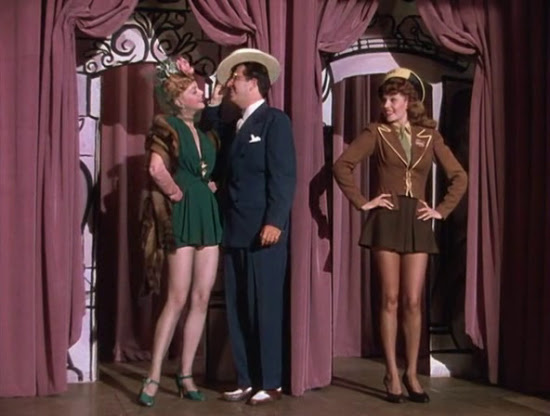 Kelly plays a character who from the beginning is deeply convinced of allowing the woman he loves the freedom to make her own decisions. When the Broadway producer asks about buying out Hayworth's contract, Kelly says there is no contract and he wouldn't stop her from doing what she wanted, "even if she had signed a piece of paper. But you don't understand something like that, do you?" He doesn't, but again, he's not a tyrant. One gets the impression the Broadway producer is simply accustomed to a world where the necessity of paperwork goes without question. 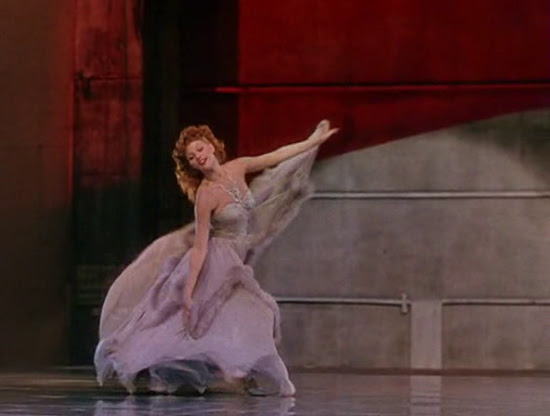 The choreography for the dance sequences in this film is unmistakably Kelly's, despite the fact that he wasn't credited as choreographer. It has his rare aptitude for making something so carefully constructed seem like stream of consciousness, a direct view of the characters' psyche. The crowning achievement in the film's dance scenes is one Kelly has with footage of himself. 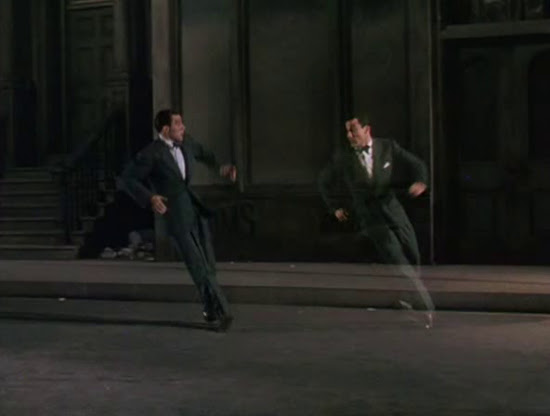 It recalls Fred Astaire dancing with his silhouettes in Swing Time but here it is more evocative of the character's struggle as it reflects Kelly's questioning whether his love for Hayworth means he should try to force her to stay with him or if he should let her go. He's in conflict with his deeply held principle.

The movie was originally conceived as a vehicle for Rita Hayworth and although she is wonderful, and an incredible dancer, she's actually the closest thing the film has to a flaw. I've yet to see her really connect with a role as well as she did in Gilda and here it's obvious her character needed to be played by someone with more warmth, like Ginger Rogers or maybe Judy Garland. There's something kind of reptilian about Hayworth--she always seems a little psychotic. This contributes to how magnificently dirty Gilda feels. Also, it would have been nice if the leading actress could have sung for herself instead of being dubbed over. 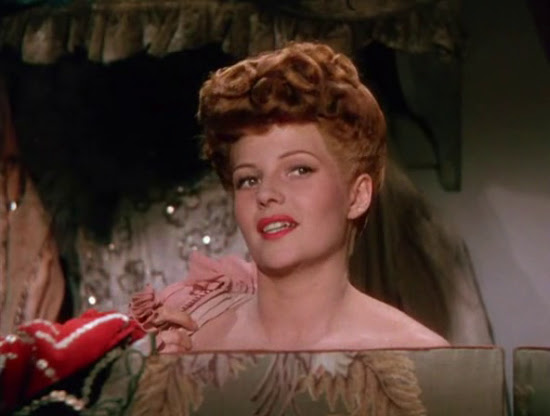 But she is beautiful and an undeniably talented dancer. The music in the movie is by Jerome Kern with lyrics by Ira Gershwin and all the songs work very well. This movie really succeeds in just about every way. 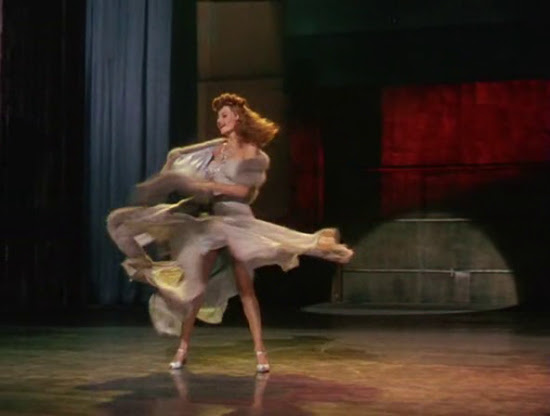 Posted by Setsuled at 6:59 PM
Email ThisBlogThis!Share to TwitterShare to FacebookShare to Pinterest