Last night I dreamt I was planning a heist with Jay, Silent Bob, Sissy Spacek dressed as Silent Bob, and a walrus with human legs. We started talking about who ought to score the heist and I said it was a shame we couldn't get Bernard Herrmann. I was met with blank stares and realised none of them had heard of Bernard Herrmann. I threw a fit, saying how I couldn't rob a bank with a bunch of people who weren't genuine cinephiles. It ended up Silent Bob was just Kevin Smith in a costume and Sissy Spacek had been the real Silent Bob all along.

Over a decade ago, my favourite drink from Starbucks was a white chocolate mocha with raspberry syrup. I long since lost my sweet tooth but to-day I ordered one for the first time in ages--with soy instead of real milk, of course, and no whipped cream. I enjoyed it. Is my sweet tooth back? Or do I just hate my health class so much I'm impelled to contrary behaviour?

Afterwards, I went to the Japanese market and bought the smallest radish they had. 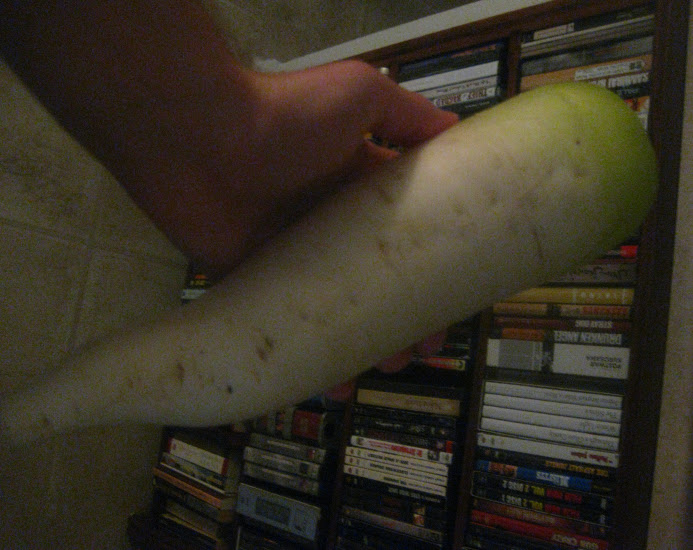 So far I've only boiled daicons I've bought. I may try roasting or baking this one. Not all at once. I wonder if I could bake it like a potato--the only "baked daicon" recipes I see on google refer to "daicon fries". I thought "fries" implied frying. But what do I know? Giant radish fries does sound intriguing.
Posted by Setsuled at 2:46 PM
Email ThisBlogThis!Share to TwitterShare to FacebookShare to Pinterest