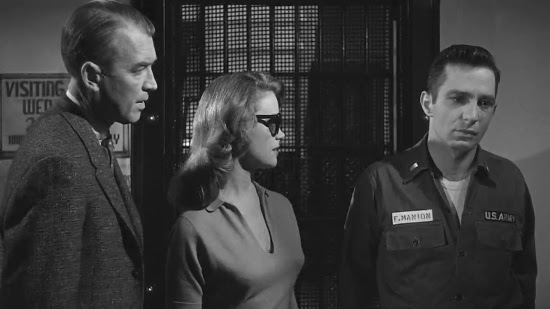 Here's an oddly gentle dream of murder and rape. Otto Preminger's 1959 film Anatomy of a Murder has been lauded for its realistic portrayal of a murder trial--it's based on a true case, the film an adaptation of a book written by a U.S. Supreme Court Justice who served as the Defence Attorney in the actual case. But the film is more interesting now for what it implies about late 1950s attitudes regarding murder and rape. On the one hand it is a well made, engrossing drama, on the other it's a sort of fascinatingly naive perspective on human nature.

The film stars Jimmy Stewart as Paul Biegler, a laid back country lawyer who loves contemporary jazz and fishing. He plays piano in his free time, which is connected to my favourite aspect of the film, the soundtrack by none other than Duke Ellington. Ellington has a cameo as "Pie-Eye", leader of a band with whom Biegler briefly is shown playing piano. 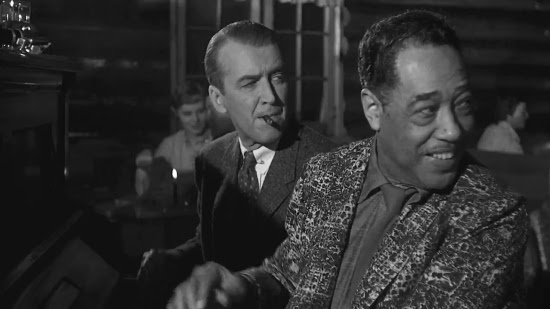 I would describe Ellington's work generally as alternating between an atmospheric melancholy and a sublime peacefulness--one hears more of the latter in Anatomy of a Murder and with the affable Mr. Biegler exuding maximum Jimmy Stewart charm, the desire to hang out with Biegler and Pie-Eye disproportionately dominates the film. 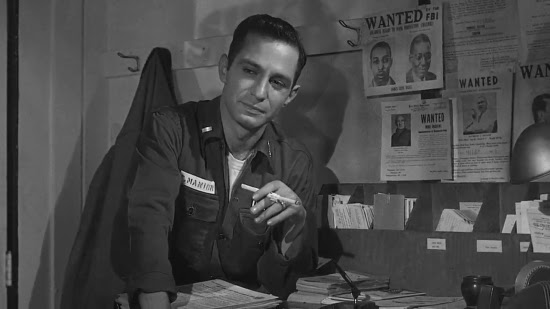 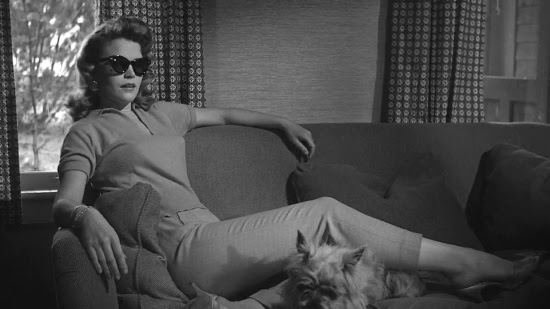 Laura's introduced as a ditzy kitten with an enormous libido. Aside from a black eye, there's nothing about her to suggest she'd been physically assaulted in any way. One could speculate Laura has repressed her feelings in an act of psychological self-preservation but that wouldn't explain why no-one around her, including Biegler, seems to expect she would feel much significant distress after what she had gone through. Biegler along with most of the men in the film seems comfortable even flirting with her. 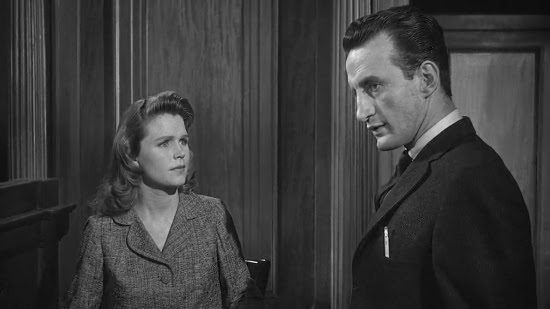 George C. Scott as the prosecuting attorney Claude Dancer is thoroughly, and obviously intentionally, disgusting when he confronts Laura on the witness stand with suggestions that she slept with Quill of her own free will. He refers to her sexy clothing and flirtatious personality with the obvious intention of casting blame on her for the rape and the movie seems to feel Dancer doing so is wrong. One could say the very fact that we're clearly meant to want Frederick to go free for killing Quill is an indication the movie is aware of what a horrible thing rape is. And yet, its attitude is so blasé. There's the lawyers arguing about how to refer to panties in the courtroom, Laura Manion's unperturbed partying while her husband is in jail.

The movie is based on a true story though one is inclined to wonder how much the real Laura Manion resembles her book or movie counterpart. I suspect the real woman may have been looking for emotional support or oblivion in behaviour similar to what is shown in the film which the movie portrays as carefree and innocent. Maybe that's exactly how the real Biegler saw it or had trained himself to see these sorts of behaviour in order to avoid facing the real horror intrinsic to the crimes with which he had to deal regularly. 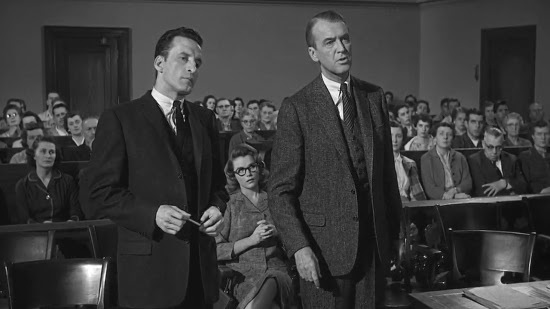 The Wikipedia entry has an interesting technical analysis of the story's legal mechanics--apparently the film was included by the American Bar Association in a list of 12 best trial films. The sparring lawyers, particularly as they're portrayed by Scott and Stewart, are fascinating to watch. It's nice to see Stewart chose to go all in with Biegler's emotional manipulations in the court room. The laid back by nature attorney grandstands with every ounce of Jimmy Stewart's acting talent.
Posted by Setsuled at 1:19 PM
Email ThisBlogThis!Share to TwitterShare to FacebookShare to Pinterest