Under a Yolk Sky


I'll say it again--Mexico is not doused in a sulphurous haze. The sky is blue during the day, just like everywhere else on Earth (aside from Beijing). You wouldn't know it from modern movies and television. I think it started with Steven Soderbergh's Traffic where at least he was using the colour filters to help audiences quickly perceive where a scene is set and to comment on the unjust division between rich and poor (jeez, it almost sounds like I liked that movie which in fact I didn't). Since then I've seen the yellow Mexico in just about every American film not directed by Robert Rodriguez. I'm sad to say there was even a little bit of it in Ridley Scott's otherwise great The Counsellor.

Speaking of Rodriguez, I was at Wal-Mart yesterday killing time while waiting for an oil change on my car. I saw two DVDs in the movie section that surprised me--one, a really nice new remastered release of Farscape season 2 and, two, the Machete Kills DVD which does not bear Mel Gibson's name or picture on the cover. Looks like the studio has a pretty good idea why that movie got such a cold reception.

Anyway, the reason I'm talking about Mexico looking yellow is that I started the third season of Breaking Bad a few days ago which coats Mexico in the thickest shade of piss I've seen yet. 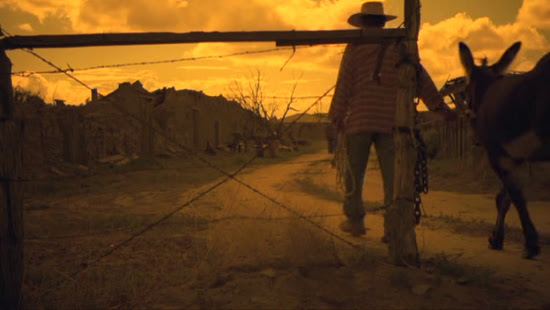 I would hereby like to call on Mexican directors to shoot scenes set in the U.S. through a yellow filter.

Otherwise the third season isn't so bad so far. It's better than the melodramatic latter half of the second season. Not that melodrama is a deal breaker for me. H.P. Lovecraft wrote in his essay on supernatural horror about Arthur Machen's "The Great God Pan":

Melodrama is undeniably present, and coincidence is stretched to a length which appears absurd upon analysis; but in the malign witchery of the tale as a whole these trifles are forgotten, and the sensitive reader reaches the end with only an appreciative shudder and a tendency to repeat the words of one of the characters: “It is too incredible, too monstrous; such things can never be in this quiet world. . . . Why, man, if such a case were possible, our earth would be a nightmare.”

But when I think about the last half of Breaking Bad season two, I can't help but think about how Walter White just happens to meet John de Lancie at a bar, just happens to break into Jessie's apartment just was someone was choking, and just happened to be living under the path of the effects of trauma on de Lancie's character. The extraordinary sequence of coincidences is far more conspicuous than any character development for Walter, except maybe when his wife went into labour at the same moment Walter needed to be at a crucial drug deal. At least that showed how Walter was fundamentally arranging his priorities, but it ought to have stopped there.

I did like the confrontation between Walter and Skyler. The show does a really good job of making Walter's family life feel like a prison. Walter and Skyler clearly shouldn't be together and I like that the show doesn't play this broadly--we feel bad for them both.

I guess now would be a good time to say happy Valentine's Day, everyone. Here's a mix tape I put together for all of you.