Not Just Existing In an Alley 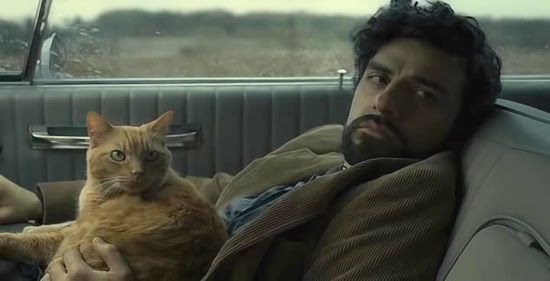 I would say almost always but, to be diplomatic, let's say sometimes a work of fiction is better than a concerted effort at adapting a non-fiction experience. One should not approach 2013's Inside Llewyn Davis as an attempt to accurately convey the atmosphere of the Greenwich Village folk music scene of the 1960s. Or even an accurate portrait of a struggling musician in the 1960s--anymore than one should take Miller's Crossing as an authentic portrayal of gangster culture or Barton Fink as an insightful depiction of trying to break into Hollywood screenwriting in the 1940s. Like those two films, Inside Llewyn Davis is a fantasy created by the Coen Brothers. It depicts an artist who loves his medium and who faces consistent rejection from the world. It's not quite as impressive as either Miller's Crossing or Barton Fink but even a merely good Coen Brothers movie is great.

The film follows a folk singer, Llewyn Davis (Oscar Isaac), who alternates between desperately trying to scrounge up gigs and trying to scrounge up a bed to sleep in for the night. When the film begins, he's been staying with a college professor called Gorfein (Ethan Phillips) and his wife. When Llewyn leaves in the morning, the Gorfeins' cat follows him out the door.

Llewyn also stays with Jim (Justin Timberlake) and Jean (Carey Mulligan), a folk duo. Jean--Mulligan looking fantastic with long black hair and bangs--is constantly angry, partly because she's pregnant with what might be Llewyn's child. Mulligan gives one of the better performances in the film. I was less impressed by Timberlake as Jim, who came off a little broad for my taste. Both his and Llewyn's singing voices are quite steeped in the mannerisms of modern R&B singers though they do make some attempt to hide it. The anachronism didn't bother me as much as the fact that I don't find such music interesting, particularly compared to 60s folk music. Oscar Isaac sounds disappointingly like Jack Johnson.

The middle of the film follows Llewyn on a road trip from New York to Chicago accompanied by John Goodman as a prickly, erudite jazz musician called Roland Turner and a quiet misfit called Johnny Five (Garrett Hedlund). It's another added to the long list of diverse and memorable roles Goodman has played for Coen brothers films and one is fascinated by the mean-spirited dandy who makes the trip miserable for the already miserable Llewyn.

Jean is angry about getting pregnant by Llewyn because she considers him a loser in contrast to her and Jim's plans to turn their music talents into a successful career. Between Jean and Llewyn is enacted the conflict between the artist as profession and the artist as an end unto itself. Llewyn, despite the increasingly clear hopelessness at ever reaching a large audience, continues performing in clubs and maintaining his tramp-like lifestyle. Unlucky circumstances prevent him from stopping even when he wants to.

Throughout the film, a tabby cat seems to symbolise a sort of self-evident, zen-like peace with Llewyn being the musician he is in the position he is in. Llewyn chases the cat who gets away from him from time to time, doesn't always seem to understand why he has the cat, sometimes carries the cat without having any idea why, and there seems to be a deep, horrible gloom when he contemplates abandoning the cat. I wonder if it's entirely a coincidence the cat resembles Audrey Hepburn's from Breakfast at Tiffany's.

The film has the least interesting production design of any Coen brothers movie I've seen. It doesn't have the complex grime of Oh Brother Where Art Thou? or the intense leather and felt beauty of Miller's Crossing. Inside Llewyn Davis looks rather typical of too many designs in modern films with even an apartment described by its resident as a "dump" featuring pristinely painted walls and a clean sofa. It all has a certain academic minimalism about it.

But the film is a nice meditation on being an artist who is not a massive success yet can't stop being an artist anyway.
Posted by Setsuled at 3:34 PM
Email ThisBlogThis!Share to TwitterShare to FacebookShare to Pinterest