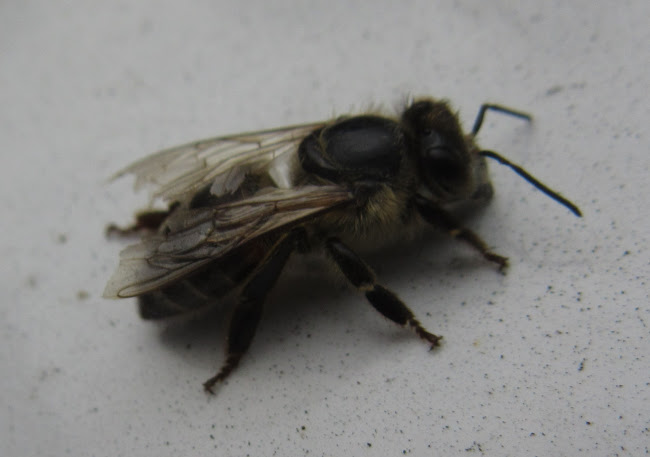 Here's a dark bee with rather ragged wings now that I look at it from my car last week. Here are a couple lizards looking out for each other from the same day: 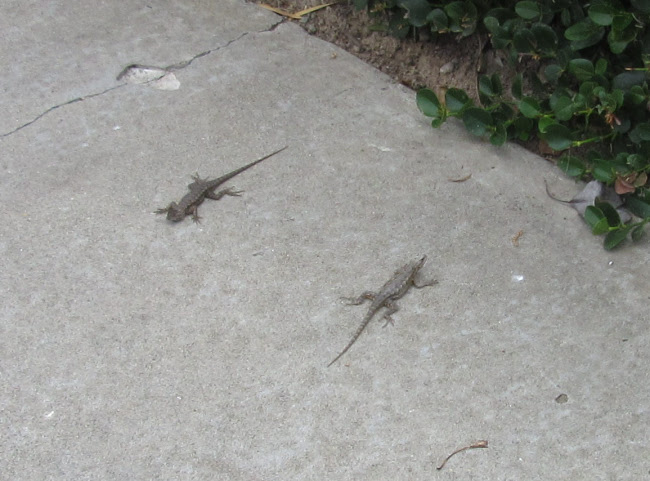 That's from my last day at school. Now I can concentrate on reading most of the day--that's what I did almost all day yesterday. I want to finish this 700 page book, The Reformation, by Diarmaid MacCulloch by the end of the week. All I need is time because, like Anne Rice said on her Facebook, where I first heard of the book, it's so well written that reading it is like "eating ice cream". I got a used copy for five dollars off Amazon less than a week ago and I'm already over two hundred pages in. Hours just fly by with this thing mainly, I think, because MacCulloch seems genuinely passionate about his subject. As he chains the influence of Erasmus to Martin Luther and the differences between the men and their differences with Zwingli, the beginnings of the Spanish Inquisition and Spain itself, the Peasant's War--it all seems to have a coherence in his mind rather than stiffly strung together notes. He obviously draws on source material but these people and events are clearly alive in his head.

It's a welcome contrast to a book I read earlier this year, African Vodun by Suzanne Preston Blier which, while informative, feels like it was written by someone who just wanted to get it over with. It reads like a master's thesis by someone whose perspective is dominated by a terror of failure. The seventh chapter, titled "Surface Parergon and the Arts of Suturing" begins with the sentence, "A variety of attachment modes are utilised to secure the diverse extrafigural materials to the surfaces of bocia and bo." Maybe she had a nightmare where she accidentally wrote, "A variety of materials are attached to bocia and bo in various ways." Really, "attachment modes"? It's not hard to figure out what "extrafigural" means but out of curiosity I googled it just now and found that a quote from African Vodun is the fifth result. The whole book's like that. I'm impressed with her thesaurus but it would have been nice to have had this information organised in a logical way. And yet, this is the most useful book I've found so far on the topic of Vodun--people seem reluctant to write about it for some reason. There are a lot of books out of print, too.

Anyway, these are two of the six books I've read so far as research for my next comic. There are five more I want to read after The Reformation but I'm hoping to get started drawing by June, which has somehow worked out to be my traditional starting month for comics. I don't even have a title for it yet. The main characters have been evolving in my head since last summer, changing gradually based on my research and just getting to know them better.

I don't know how many historical figures will be in the comic. Maybe the most fascinating person I've read about so far in The Reformation is John of Leiden, a Dutch Anabaptist leader who took over the German City of Munster for a year. He named himself king and instituted polygamy due to the fact that most of the Anabaptists in Munster were women. If you go to his Wikipedia page, you can see the actual crow's cage his body was placed in after he was tortured and executed by the combined forces of Catholics and Lutherans. So they could agree on something.