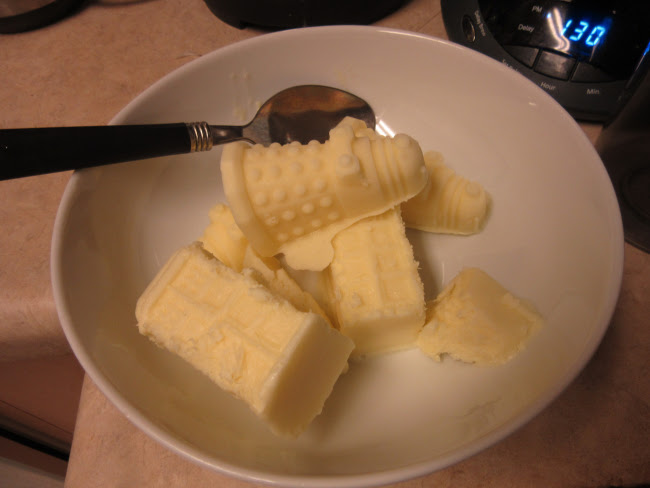 I've been making popsicles lately using some moulds my parents gave me for my birthday and I had a little more in my blender than could fit in the moulds so I put the rest in a Doctor Who ice cream tray my sister and her husband gave me for Christmas. I use a whole pineapple, cocoanut cream, and orange blossom honey. I think I used to a little too much cocoanut cream this time.

This past week, I listened to the rest of the Excelis audio plays, following the initial Fifth Doctor episode I listened to last week. This is followed by a Sixth Doctor story, a Seventh Doctor story, and then a story that doesn't feature the Doctor starring his sometime companions Bernice Summerfield and Iris Wildthyme. The ones with the Doctor all feature Anthony Stewart Head playing what seem at first to be three different men at three different times in a particular planet's history but early on in the second story it becomes clear that it's all the same man. It's an interesting concept, his first persona, Grayvorne, being a sort of Barbarian warlord and his subsequent personalities being more modern versions of a cruel warrior king--a brutish cop and a tyrant.

The final story has Bernice meeting Iris for the first time in order to finally retrieve the latter's handbag which somehow started the trouble. Benny's a little posh for the blue collar Iris but the two manage to get along amusingly when they discover how much they both love alcohol. Essentially they're both "anti-Doctors" in their own way and it's not hard to see them as predecessors of River Song.

Reading about the Reformation lately, I came inevitably to the subject of the St. Bartholomew's Day massacre in 1572 when Catholics massacred thousands of Protestants in France. Starting with the assassination of Protestant aristocrats at the order of the king's mother it sparked spontaneous violence from Catholic citizens throughout the kingdom who slaughtered their Protestant neighbours for weeks. It's an impressively horrific chapter in history and somehow there was a Doctor Who serial about it, a First Doctor serial no less from the period when the show was probably most regarded as a children's series.

The Massacre of St. Bartholomew's Eve is a lost serial, only audio and stills survive.


The Massacre of St Bartholomew's Eve (1) by dwrecons

The Doctor (William Hartnell) and his companion Steven (Peter Purves) visit Paris just days before the massacre and find Protestant and Catholic young men baiting each other in a pub. Still, the Doctor doesn't seem quite aware of precisely when he is, cheerfully going off to meet an apothecary who seems to be on the verge of discovery germs.

The story portrays both sides of the religious conflict as being petty and cruel though, while there are several nice men and women among the Protestants, the Catholics are portrayed as uniformly vicious. The story conveniently forgets to mention that the former Queen ordered the assassination of Coligny because the Huguenot admiral had ordered the assassination of her son. Britain's religious affiliation seems like it might partly be responsible for the portrayal of Catholics as villainous in the episode but, then, it's hard to argue when the Catholics really did murder thousands of people.

The Doctor and Steven leave before the actual massacre occurs and the final episode has a scene startlingly reminiscent of newer Doctor Who episodes where Steven angrily confronts the Doctor for not doing something to save more people. When Steven seems like he's going to abandon the Doctor, Hartnell has a rather nice moment where he speaks to himself, lamenting how "they're all gone now" that even his own granddaughter hadn't "understood". If you can't get through a serial made up of only stills, I recommend listening at least to that scene.

Finally, I want to mention how happy I am David Lynch is back on board for Twin Peaks. I guess his earlier announcement really was a negotiating tactic--the guy played hardball and won. David Lynch is an artistic Goliath, I'm glad he's on our side.