The Watchers of the Television 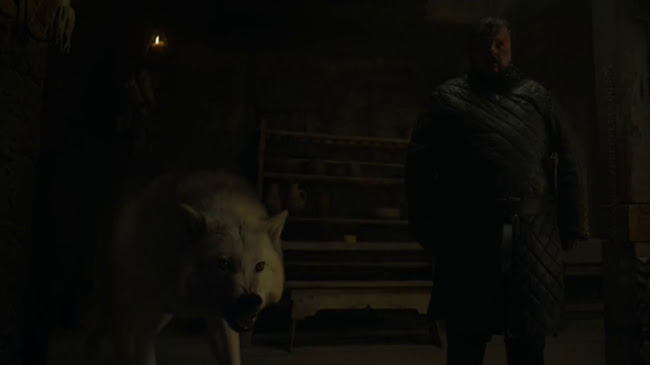 I think in honour of Ireland I'll be calling it Game O'Thrones to-day.

Last night's episode seemed primarily to consist of connecting scenes between last week's episode and next week's--lots of plot stuff, big developments to get characters to new places for next week to digest. Some of it I liked, some of it felt a bit rushed, as the io9 review says. There were some dumb things but mostly they were because of already established dumb things.

Spoilers after the screenshot from Brazil. 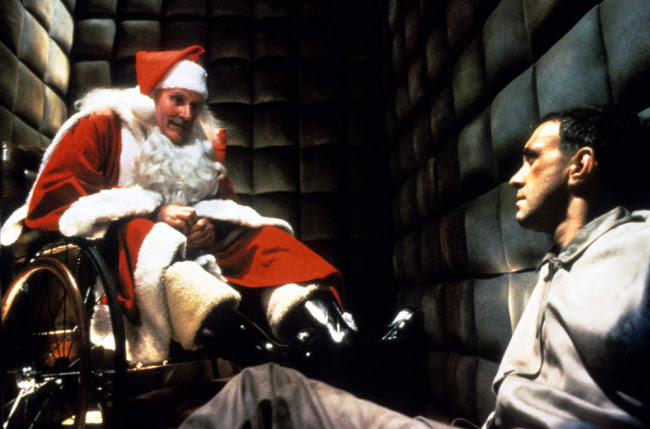 I guess Peter Vaughan (left) won't be reuniting with his costar from Terry Gilliam's 1985 film, Brazil, Jonathan Pryce (right) because, in my favourite scene from last night, Vaughan's character, Maester Aemon, passed away more peacefully than just about anyone else in Westeros. 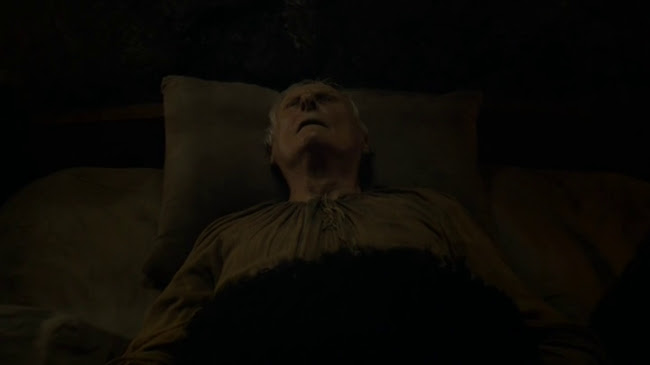 Aemon, reminiscing through slight hallucination, seems to find himself back with a more innocent version of his brother, the long dead mad king. The line where he says he dreamed he was old ranks with Ciaran Hinds' death earlier in the season.

Meanwhile, Pryce is miles away in King's Landing sparring with Diana Rigg. 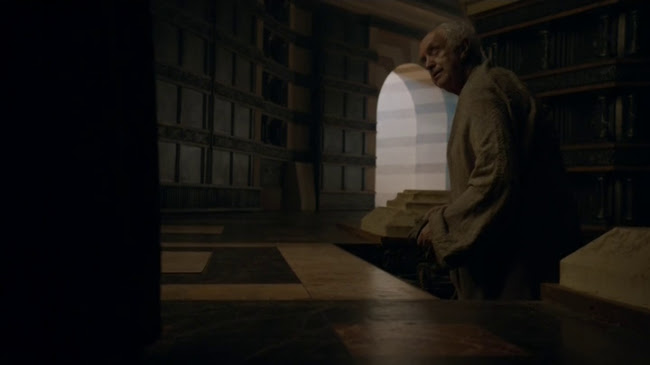 I'm not really sure if the High Sparrow is very badly written or completely delusional. Olenna (Rigg) says she can spot a fraud a mile away and I thought, yeah, this guy isn't exactly subtle. As Olenna points out, out of all the people in King's Landing he could have condemned, he chose politically significant people. It's so obviously a power play. But he stays committed to the role, giving Olenna a rap about how the commoners outnumber the aristocrats and how he's with "the people". "Well, if that's so," I thought, "and you don't believe in VIPs, why are you scrubbing the floor of this huge room by yourself?" 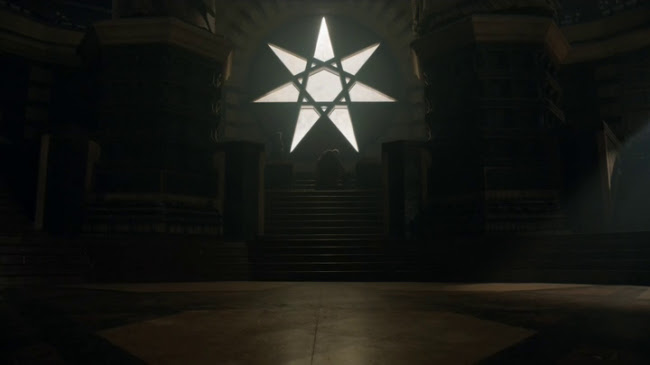 One thing that generally goes along with being popular is that people want to be around you. I guess if I worked hard for the show, I could say that scrubbing the floor is a form of meditation and the High Sparrow asked to be alone. But then, despite being the guy who says religion is supposed to be for the people, he's basically shutting everyone out of the holy place on his peculiar prerogative. It makes his threat to Olenna that he's somehow going to turn her own subjects against her seem really lame. George R.R. Martin has said in interviews that the Sparrows are inspired by the Reformation. If that's so, he or Benioff and Weiss have a pretty hazy grasp on that chapter in history. Neither the Catholics or the Protestants limited the people they denounced for heresy to prominent figures.

I did kind of like Pryce's speech about the age of the altar. But the character is far more effective if you look at him as a fringe cult figure, more like the Ranters or the Hussites than John Calvin or Martin Luther. The fact that Jan Hus was burned at the stake by the Catholic Church reminds us that crazy religious establishments tend to spend a lot more time killing smaller groups of people with other crazy religious ideas. 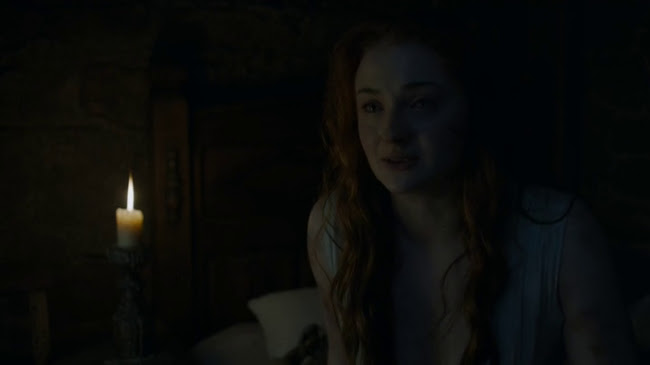 In Winterfell, we find Sansa locked away having suffered many more cruel nights at the hands of Ramsay. She begs Reek to help her--if anyone was expecting Theon to reassert himself and do so they must have forgotten about the time he had a straight razor to Ramsay's throat and did nothing but shave. Ramsay cut Theon's dick off, by the laws of bro-hood or something Theon has to do everything Ramsay says now.

You know, I should really stress this again in case Snoop Dogg is reading; you can't make a guy your thrall by cutting his penis off. It won't work. 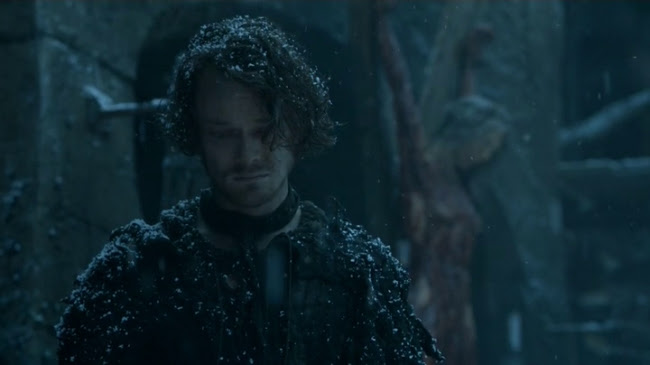 I kind of wondered how Ramsay knew it was the old woman who told Sansa about the candle in the window signal. But I guess he could have interrogated all the serving staff. I guess he's not exactly following his father's advice about trying to win the hearts and minds of the north. At this point, I wouldn't be surprised if Roose kills Ramsay.

Not too far away, Stannis is plotting his attack on Winterfell despite Davos' misgivings. I really liked that Melisandre wants to sacrifice Stannis' daughter. I look forward to seeing how this plays out. 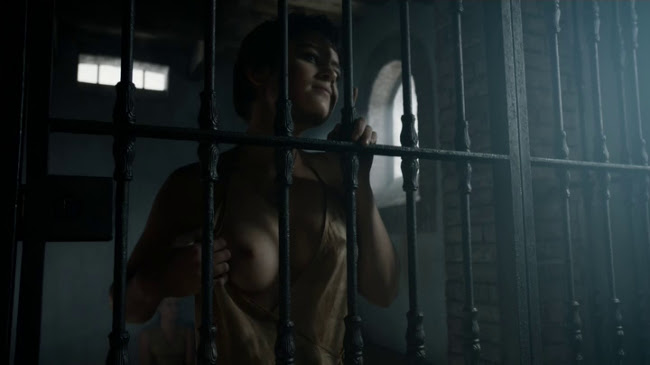 In Dorne, meanwhile, one of the Sand Snakes uses one of Melisandre's favourite persuasion techniques by taking her clothes off in the middle of a conversation with a guy though instead of sexually inexperienced Jon Snow who's caught flat-footed it's Bronn--rather out of character for him.

But I guess the big news from last night was Tyrion meeting Daenerys. This was the end of a segment featuring a series of very unlikely things--Tyrion managing to talk himself into being bought by the same guy who bought Jorah, the same buyer being rather careless with his slave gladiators, Daenerys apparently forgetting she'd outlawed slavery or somehow not understanding she was witnessing slaves fighting right in front of her, and Jorah managing to knock out half a dozen fighters without killing them. Tyrion, for some reason the only slave who was chained down, is set loose by another slave and promptly introduces himself to the queen, taking us well and truly outside the territory of the source books, by all accounts (I haven't read them). Well, to Benioff and Weiss, I say good luck. It would be nice if this works.

Posted by Setsuled at 3:39 PM
Email ThisBlogThis!Share to TwitterShare to FacebookShare to Pinterest